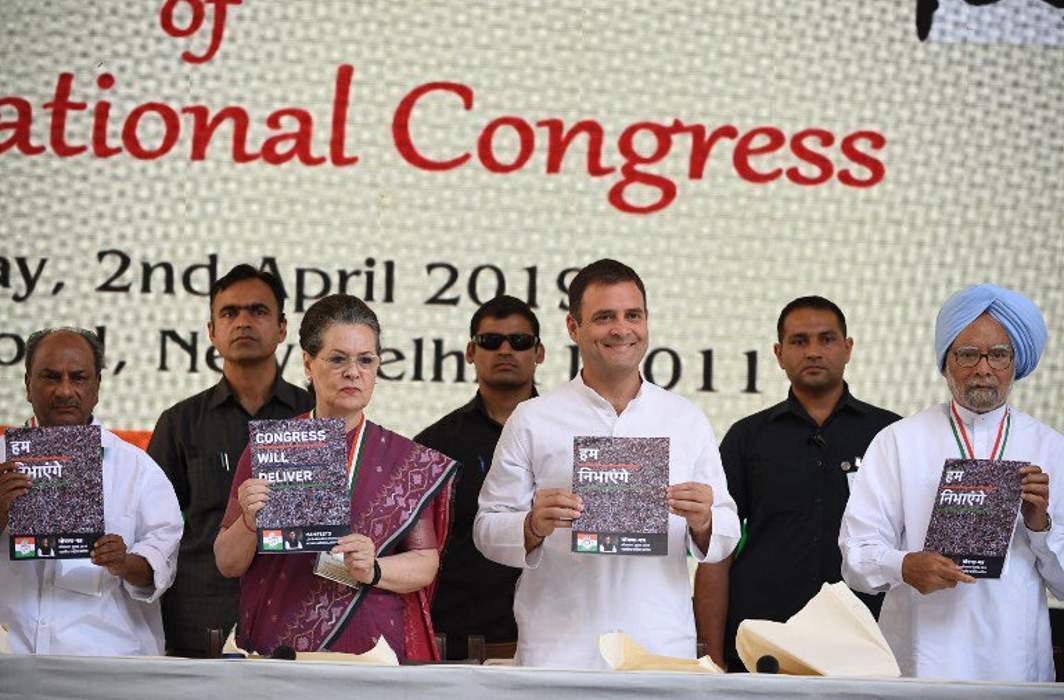 The Congress manifesto for Lok Sabha elections released today (Tuesday, April 2) came with a flurry of promises to address the myriad problems that have burgeoned under the Narendra Modi government and “a clean break from the past five years.”

Putting forth its program for governance on a whole gamut of issues, the Congress pledged to focus on unemployment, rural development and farmers’ welfare, women empowerment and to strengthen the economy. While all these have come under strain under the present government, the Congress, if it manages to form government after the elections, will be held to its promises about them.

The manifesto, titled “Congress will deliver”, was released by party president Rahul Gandhi at an event at the AICC headquarters in New Delhi in the presence of senior party leaders Sonia Gandhi, Manmohan Singh, P Chidambaram and others.

“In this time of deep crisis, the Indian National Congress promises a clean break from the past five years.”

The manifesto focuses on agrarian crisis and unemployment, and the Congress’ minimum income scheme NYAY that guarantees Rs 72,000 a year to the bottom most or poorest 20 per cent of households.

“There is not a single lie in the manifesto; I’ve never broken a promise that I’ve made,” Rahul Gandhi said.

Rahul’s campaign so far has largely been centred on national issues like demonetisation, implementation of GST, India’s Rafale deal with France and “destruction” of institutions like the Election Commission, CBI and universities etc. At the event, he targeted Prime Minister Narendra Modi for being “scared”, and challenged him to a debate on issues like corruption and national security.

“In the last five years, the BJP government has spread hate and divisiveness. The Congress will work towards uniting India and bringing the people together,” he added.

On the issue of unemployment, the Congress said it would give the “highest priority” to protecting existing jobs and creating new jobs. By 2020, it has pledged to fill vacancies in all Central Government, Central Public Sector Enterprises, Judiciary and Parliament.

According to the manifesto, Congress will create a new Ministry of Industry, Services and Employment in order to underline the link between the growth of the industry and services sectors and rapid creation of jobs.

The manifesto promises to fill the 4 lakh vacancies in the Central Government, Central Public Sector Enterprises, Judiciary and Parliament by March 2020. As a condition for devolution of funds to the healthcare and education sectors and to Panchayats and Municipalities, Congress will request State Governments to fill all vacancies, estimated at 20 lakh, in the 2 sectors and in local bodies, it said.

“We will work with State Governments to create new Seva Mitra positions (estimated at 10 lakh) in every Gram Panchayat and every Urban Local. Body to ensure the effective delivery of government services to citizens. Application fees for government examinations and government posts will be abolished.”

The party has pledged to create new jobs for qualified teachers, doctors, nurses, paramedics, technicians, instructors and administrators through a massive expansion of the education and health sectors and for Para-state workers such as Anganwadi workers, ASHA workers, rozgarsahayaks, preraks, and anudeshaks. “In addition, we will expand the ASHA programme and appoint a second ASHA worker in all villages with a population exceeding 2500 persons.”

Rahul has promised to implement the minimum income support scheme, or NYAY, to “eliminate abject poverty” by 2030. The Congress party plans to roll out the scheme in three phases, under which five crore families who constitute the poorest 20 per cent, will be given a cash transfer of Rs. 72,000 a year.

The manifesto promised the amount will be transferred to the woman in the household, as far as possible.

For farmers, the party promises to put them on the path from “Karz Maafi”, to “Karz Mukti”. This will be done through remunerative prices, lower input costs, and assured access to institutional credit.

The manifesto has promised a separate “Kisan Budget” for the farmers every year to help ensure remunerative prices, lower input costs, and assured access to institutional credit. Congress president Rahul Gandhi said if farmers are unable to repay the loans, it will be treated as a civil offence and not a criminal offence. He said it will be a “historic step” in the welfare of farmers.

The party has assured it will hold accountable the police and district administration for proven negligence in the case of riots, mob violence and hate crimes. “In the last 5 years under the NDA Government, hate crimes and atrocities against vulnerable sections of the people have increased manifold. Congress promises to end the sense of impunity, stamp out mob violence and lynching, and prevent atrocities and hate crimes against the SC, ST, women and minorities.”

The manifesto of the party said it will abolish the opaque electoral bonds introduced by the NDA government and set up a National Election Fund that will be allocated at the time of elections to recognised political parties. “Congress promises to revitalise the institutions that were brazenly undermined in the last 5 years such as RBI, ECI, CIC, CBI, etc. Congress will restore their dignity, authority and autonomy while making them accountable to Parliament,” the manifesto read.

The party’s manifesto said it will omit Section 124A of the Indian Penal Code (that defines the offence of ‘sedition’) “that has been misused and, in any event, has become redundant because of subsequent laws.”

The party said it will “reverse the trend of declining defence spending under the NDA government”, and increase it to meet the requirements of the Armed Forces. “We will expedite all modernisation programmes of the Armed Forces in a transparent manner. We will improve social security, education and health facilities for our Paramilitary Forces and families.”

The manifesto promised to implement, in letter and spirit, the Forest Rights Act, 2006 and secure for the Scheduled Tribes the rights guaranteed under the Act. No forest dweller will be unjustly evicted. We will establish a National Commission for Non-Timber Forest Produce. To improve the livelihood and income of Adivasis, we will offer Minimum Support Prices for NTFP.

Congress has promised to enact the Right to Healthcare Act and guarantee every citizen free diagnostics, out-patient care, free medicines and hospitalisation, through a network of public hospitals and enlisted private hospitals. We will double expenditure on healthcare to 3 per cent of GDP by 2023-24.

The Congress will replace the Goods and Services Tax (GST) with ‘GST 2.0’, a standard rate of tax, zero rating of exports, and exemption for essential goods and services, and also promise panchayats and municipalities a share of GST revenues.

“GST 2.0 will be easy to administer, easy to understand by the taxpayer, and easy to comply with. We are confident that GST 2.0 will promote growth, new businesses and employment,” the manifesto reads.

Congress has promised to increase the share of India’s manufacturing sector from the current level of 16 per cent of GDP to 25 per cent within a period of 5 years and to make India a manufacturing hub for the world. The manifesto said the party will announce a ‘Make for the World’ policy under which foreign and Indian companies will be invited to invest in ‘Exclusive Export-only Zones’, manufacture and export their entire production, pay no indirect taxes and pay a low rate of corporate tax.

The party has promised to double the allocation for education to 6 per cent of GDP by 2023-24. School education from Class I to Class XII in public schools shall be compulsory and free. Schools will have adequate infrastructure and qualified teachers.

The party has promised to pass in the first session of the 17th Lok Sabha the Women’s Reservation Bill reserving 33 percent of seats for women in the Lok Sabha and the State Legislative Assemblies. Congress will also reserve 33 percent of all posts/vacancies in the Central Government for women, it said.

Congress promised an action agenda that will place India at the forefront of the battle against global warming and environmental protection. “We recognise that air pollution is a national public health emergency and will significantly strengthen the National Clean Air Programme. We will set up an independent, empowered and transparent Environment Protection Authority, redefine the role of the Forest Departments and increase our forest cover,” the manifesto read.

The party promised to pass the Right to Homestead Act to provide a piece of land for every rural household that does not own a home or own land on which a house may be built.

NITI Ayog to be scrapped

The party has said it will scrap the NITI Aayog, “a noisy and incompetent intermeddler” and appoint a new Planning Commission with “renowned economists and financial experts as members”. Rahul has previously expressed his reservations with the institution.

The Congress party has also promised to amend the Aadhaar Act, 2016 and restrict the use of Aadhaar to subsidies, benefits and services provided by the government.