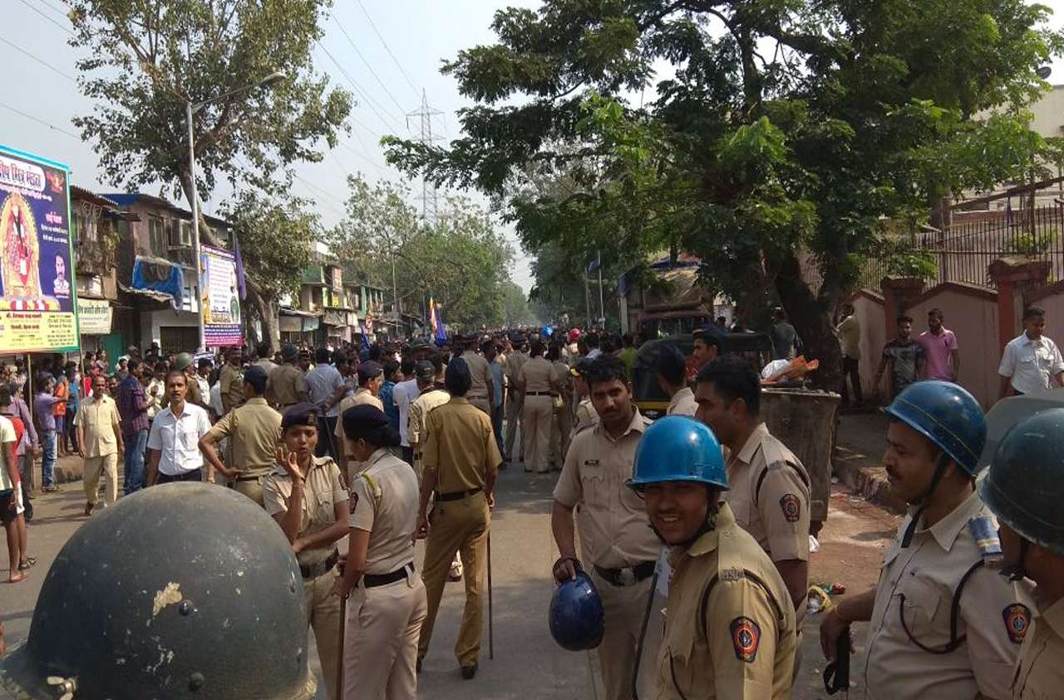 Amid violent protests by members of several Dalit organisations, Maharashtra remained on the edge on Wednesday.

The agitators, who have called for a statewide shutdown to protest the Devendra Fadnavis government’s alleged failure in stopping the violence in Bhima Koregaon in Pune district earlier this week, indulged in stone-pelting at public vehicles and commercial establishments, disrupted train services by blocking railway tracks and carried out protest marches. Among the worst hit areas in the state are Mumbai, Thane, Pune and Nagpur.

Clashes between Dalit groups and supporters of right-wing Hindu organisations had erupted at Bhima Koregaon and neighbouring villages during the celebrations to mark the 200th anniversary of a British-Peshwa battle in which the forces of the British East India Company – with the support of a large contingent of Mahar (Dalit) soldiers – had defeated the Maratha Peshwa army.

The atrocities against the Dalits in Bhima Koregaon earlier this week have triggered a predictable political backlash, with the Congress and Opposition parties disrupting Parliament proceedings on Wednesday , alleging that the right-wing Hindutva brigade allegedly involved in the anti-Dalit clashes that have claimed at least one life so far were being patronised by the ruling BJP government of Maharashtra.

While Dalit protestors across Maharashtra brought life to a standstill in many areas of the state, protests by the Opposition forced an adjournment of the Rajya Sabha – till Wednesday noon – while in the Lok Sabha, Congress leader Mallikarjun Kharge tore into the Prime Minister Narendra Modi-led central government and the BJP, accusing them of fanning caste violence and acrimony.

Congress leader Mallikarjun Kharge raises the issue of #BhimaKoregaonViolence in Lok Sabha, asks "who instigated and interfered in this event?" pic.twitter.com/XyNh3SKJwa

Reports of Dalit protesters jumping on to railway tracks, shouting slogans and waving flags to block tracks have come in from the Thane railway station. Similar incidents have been reported on the Western line in Mumbai’s suburb of Goregaon. In Mumbai, schools and colleges opened as usual but school buses stayed off roads as a precaution. A private school bus was stoned in the state capital’s suburb of Chembur although no injuries to its passengers were reported.

Maharashtra: Protests being carried out in the state; visuals from Nagpur's Shatabdi Square #BhimaKoregaonViolence pic.twitter.com/CRxHim7qOl

In Pune – the epicentre of the Dalit protests – Wednesday morning began on a calm note with shopkeepers opening their establishments and public transport running smoothly. However, the law and order situation quickly disintegrated as protests gained momentum.

Many schools in Pune were shut after the authorities asked students not to come as a precautionary measure. “Officially, we did not declare that we will close the school. But, we are not taking any attendance. If parents want to bring their children to schools, then its fine,” principal of St Joseph School Flory Fargose told reporters in Pune.

Many state transport buses did not ply between Pune and nearby villages in view of the violence, said officials.

According to news agencies, coastal Konkan region of Maharashtra has reported a near-total shutdown, as also Dalit strongholds of Marathwada like Beed, Latur, Solapur, Jalgaon, Dhule, Ahmednagar, Nashik and Palghar. Internet services too have been suspended in several parts of the state for the day.

The Maharashtra State Road Transport Corporation (MSRTC) buses in some sensitive districts have been suspended as a precaution after it suffered damages to 187 buses in Tuesday’s violence.

The Bharipa Bahujan Mahasangh, a Dalit party headed by Prakash Ambedakr, the grandson of Dalit icon Dr Babasaheb Ambedkar, has called for a “peaceful Maharashtra shutdown”. Prakash Ambedkar’s call has elicited support from various Dalit parties, Leftist parties and some Maratha groups while there is a likelihood of other parties supporting it too in the days to come.

Prakash Ambedkar has alleged that Hindu Ekta Aghadi – an outfit known for its proximity to the BJP in the state – was responsible for the violence that rocked Bhima Koregaon on January 1. He said Maharashtra Democratic Front, Maharashtra Left Front and some 250 other organisations have supported his call.

Gujarat MLA and Dalit leader Jignesh Mevani, who was in Mumbai on Tuesday, alleged that the attacks on Dalits in Pune district were carried out by supporters of the Bharatiya Janata Party (BJP) and the Rashtriya Swayamsevak Sangh.

“These organisations are modern-day Peshwas, representing Brahminism in its worst form. Two hundred years ago, our forefathers fought against the Peshwas. Today, Dalits of my generation are fighting against the new Peshwas,” Mevani said, adding: “Why can’t Dalits peacefully commemorate the anniversary of the Bhima Koregaon battle? The attackers have resorted to such methods because they are scared of Dalit assertion.”

Hundreds of thousands of people gather at Bhima Koregaon every year to mark the anniversary of an 1818 war between the British and the Peshwa.

Many Dalit leaders believe the war was won by the British with the help of Dalit soldiers in the regiment, who defeated a large army of the Peshwa, who was alleged to have instituted oppressive caste practices.

The celebrations gathered momentum in 1927 after BR Ambedkar visited the spot and called the Bhima Koregaon battle a war against caste. Historians are divided on the subject.

This year, the celebrations have been controversial, with several right-wing groups, such as the Akhil Bharatiya Brahmin Mahasangh calling the event anti-national and asserting that the Dalits had essentially helped the British – a foreign race – defeat local rulers – the Maratha Peshwa and thereby abetted establishment of British rule.