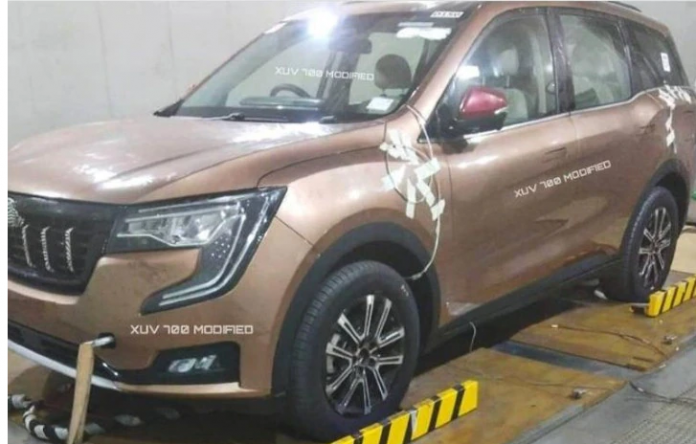 Mahindra XUV700 is all set to launch in India, but before its launch, the spied images of the SUV have been circulating on social media platforms. Recently the king-size SUV has been spotted without any camouflage, which gives a clear idea about the car.

In the photos it can be seen that the XUV700 seems to be slightly bigger as compared to XUV500, the company has made major cosmetic changes in the car, but the styling and the outer look of the car are quite similar to its other sibling-like XUV500.

The carmaker has increased the XUV700 level by introducing flush-fitting door handles, which is making the car even more premium in the segment.

Photos reveals that the carmakers have not done much chrome work on its front grille, which may disappoint its customers. The car will have LED DRLs, dual-tone five-spoke alloy wheels, chrome grills on the front with the Mahindra logo on it.

The Indian car makers have already revealed that the SUV will come with a wider panoramic sunroof. For the first time, Mahindra has introduced Mercedes-inspired ambient lighting for in the car, which definitely gives the premium class feels to the customers. The will come with bigger infotainment system and digital instrument cluster.

In terms of safety features, Mahindra has already been teased its customers with some high-tech features like air filters, personalized safety alerts, and high beam assist. The car will also have multiple airbags, ABS with EBD, electronic stability control and advanced driver assistance systems (ADAS).

The Mahindra XUV700 is expected to launch somewhere around August and November 2021, with a starting price of Rs 16 lakh. The car will compete against Hyundai Alcazar, MG Hector Plus, and Tata Safari.