Mamata Banerjee's nephew Abhishek Banerjee, a Trinamool Congress MP from Diamond Harbour, alleges that he is being targeted by the BJP just ahead of the Assembly polls. 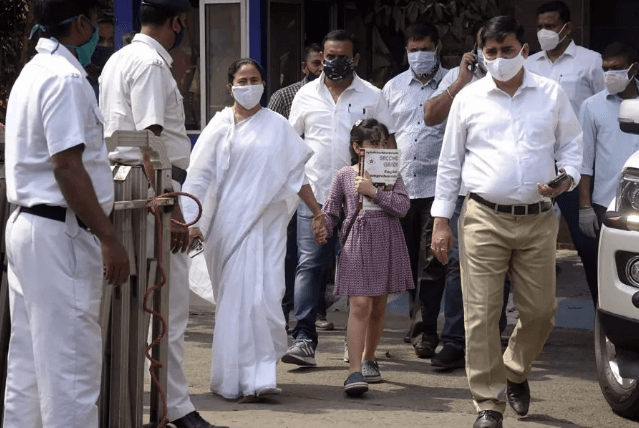 Bengal Chief Minister Mamata Banerjee on Tuesday paid an unscheduled visit to her nephew Abhishek Banerjee ahead of the CBI questioning of his wife in a coal scam. The Chief Minister met her nephew and his family for a few minutes and left the apartment.

Moments after Banerjee’s cavalcade left, a CBI team of around seven-eight officers arrived at Abhishek Banerjee’s residence to question his wife Rujira Banerjee. She had written to the CBI that she is unaware of the reason for questioning but the investigation team can arrive and question her today.

She wrote that she was unaware of the reason for her questioning or the matter of the investigation but the team may visit her residence as per the convenience between 11 am and 3 pm on February 22, 2021.

Abhishek Banerjee alleges that the BJP is targeting him just ahead of the Assembly elections in the state and shared the CBI notice issued to his wife. Launching a scathing attack at the central government, Banerjee tweeted that if they think they can use these ploys to intimidate him, they are mistaken. They are not the ones who would ever be cowed down, he further wrote.

The CBI says it is investigating allegations that leaders of the Trinamool Congress were paid bribes by the coal mafias. Abhishek Banerjee’s sister-in-law Menaka Gambhir was also questioned into the matter for three hours at her South Kolkata apartment on Monday.

The CBI had filed a case on November 27, 2020 into alleged illegal and coal theft from Kunustoria and Kajoria coal fields of Eastern Coalfield Limited. Reports suggested that there has been transfer of money from accounts linked to coal theft to accounts of Rujira Banerjee and Menaka Gambhir.

On 31 December, the CBI conducted raids on the homes of Vinay Mishra, the general secretary of the Trinamool’s youth wing that is headed by Abhishek Banerjee. Vinay Mishra has been missing since.

The BJP accuses Abhishek Banerjee, the MP from Diamond Harbour, of involvement in the coal scam and has often referred to him as the coal thief.

However, the Trinamool in its defence says the BJP is misusing the CBI to malign the image of the Chief Minister and her family just ahead of the West Bengal elections due by May.