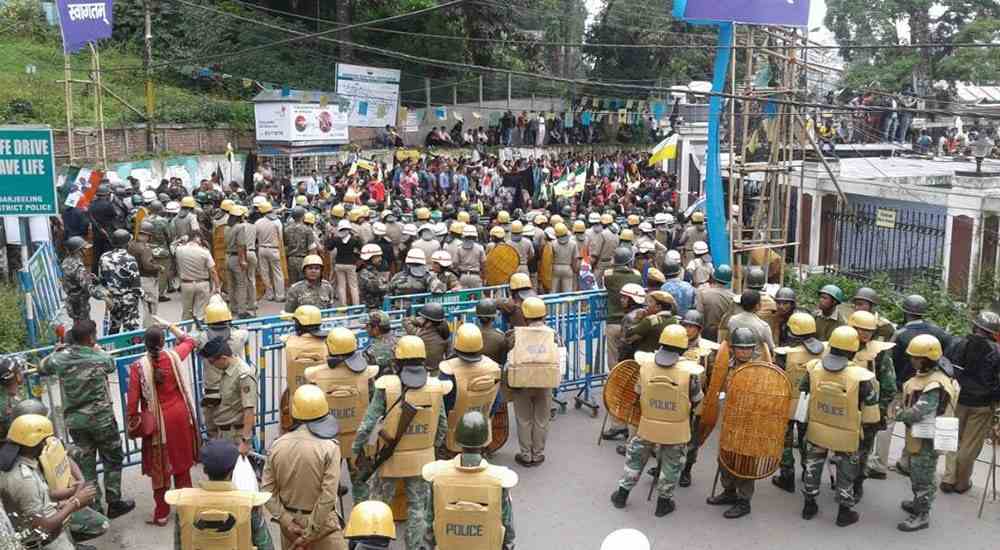 Situation in hilly Darjeeling region turned explosive on Saturday when a police officer was stabbed to death by protesters during fresh clashes that followed the arrest of son of Darjeeling MLA and alleged attack on the house of a senior GJM  leader.

According to reports, the GJM supporters threw stones and bottles at the security forces, prompting them to resort to lathicharge and use teargas shells. Four police vehicles were reported to have been set on fire during the clashes.

The indefinite strike called by GJM in Darjeeling has entered into sixth day, paralyzing life in the hills.  Darjeeling Himalayan Railway has been suspended, while markets and business establishments, except chemist shops, remain closed.

West Bengal Chief Minister Mamata Banerjee expressed shock on the deteriorating situation. She said whatever was happening was “a deep rooted conspiracy”.  “Assistant Commandant Kirem Tamang was stabbed to death by protesters. We are really shocked. We urge the GJM to promote peace,” she said.

The areas affected by the indefinite strike include Darjeeling and Kalimpong districts and Dooars, the foothills of Himalayas covering stretches of Jalpaiguri and Alipurduar districts..

The protest initially started against West Bengal government’s decision to make Bengali language compulsory in the government aided schools. But now it has turned into a movement for a separate Gorkhaland.

Sensing the seriousness of the situation belatedly, West Bengal government has assured that the new language rule would not be imposed in the hill districts.