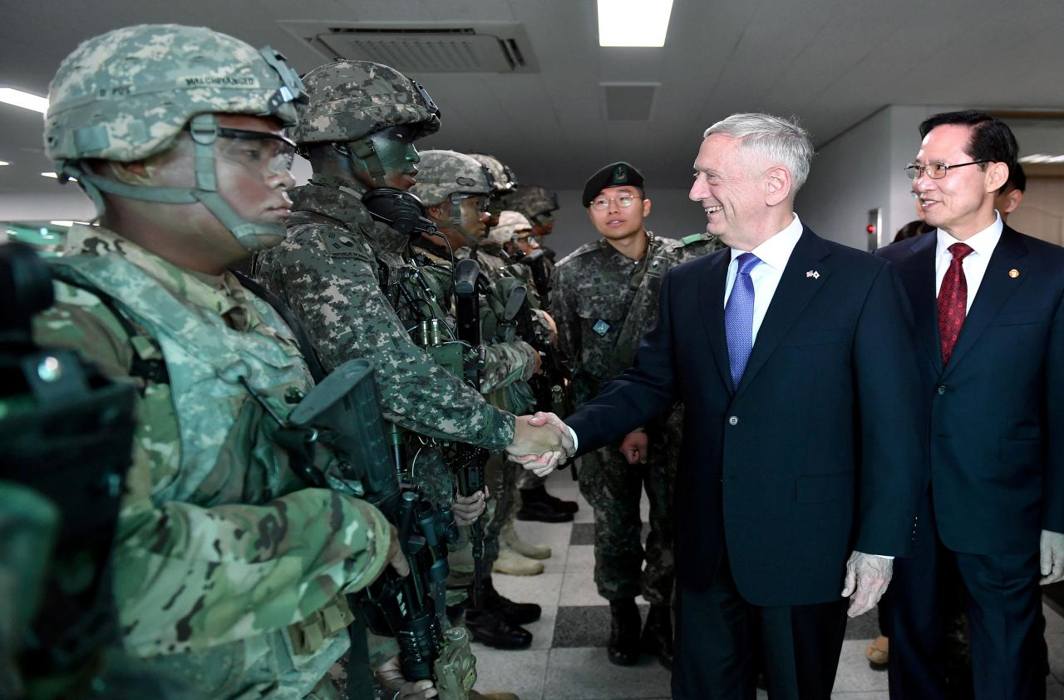 UN should impose sanctions on US until it gets rid of all n-weapons, says expert

Indicating more active presence in the region, US Defense Secretary Jim Mattis has, on Saturday said that he could not imagine his country ever accepting a nuclear North Korea. He has also warned that North Korea’s rapidly advancing nuclear and missile programs would undermine, not strengthen Pyongyang’s security.

Jim Mattis was visiting South Korea on Friday before Trump’s forthcoming South Asian tour. He emphasised for diplomatic efforts instead of military ones to resolve the crisis with North Korea as he stood at the tense and heavily fortified border between North and South Korea. He was quoted saying: “Our goal is not war.”

He even warned Pyongyang that its military was no match for the U.S.-South Korean alliance, and that diplomacy was most effective “when backed by credible military force.”

Meantime Mattis threatened to Kim Jong Un saying, “Make no mistake – any attack on the United States, or our allies, will be defeated. And any use of nuclear weapons by the North will be met with a massive military response that is both effective and overwhelming.”

South Korean Defense Minister Song Young-moo, dismissed the idea of deploying tactical nuclear weapons to the peninsula as a response to the North’s advances. However, he said that U.S.-Korean alliance had the ability to respond, even in the event of a nuclear attack from North Korea.

Tension between Pyongyang and the Washington has been raging after a series of nuclear and missile tests by Kim’s administration in the recent months.

The CIA has said North Korea could be only months away from developing the ability to hit the United States with nuclear weapons, a scenario Trump has vowed to prevent.

US President Donald Trump, who has threatened with “fire and fury world has never seen before” and to destroy the North if necessary, will travel for South Asia next week. The trip will include a stop in South Korea.

The US and South Korea conducted a five day naval drill, which began on October 16, involving most modern weapons including the nuclear aircraft carrier Ronald Reagan, three nuclear submarines, Aegis destroyers and more than 40 other warships and fighter aircrafts “of all kinds.”

Meanwhile an American political commentator Bruce Gagnon has said that UN should impose sanctions on the US until it get rid of its all nuclear weapons and closes its military bases around the world. Gagnon is the coordinator at the Brunswick based Global Network Against Weapons & Nuclear Power in Space.