Home Latest india news McCain’s funeral: The man he was and Trump has never been 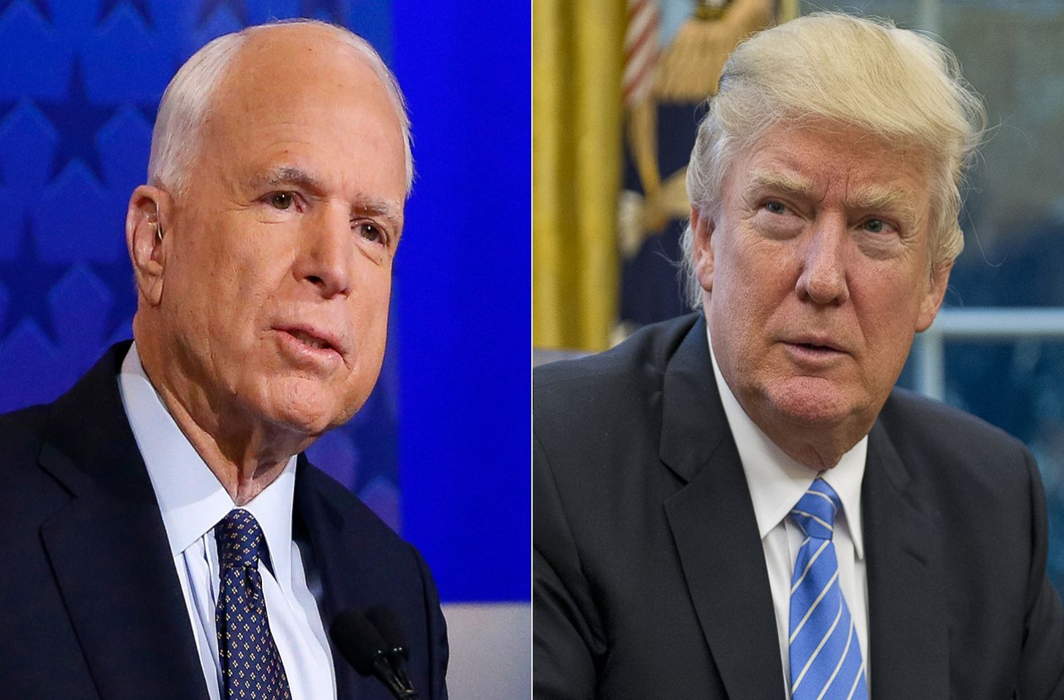 John Sidney McCain III may have graduated at the bottom of his class at the US Naval Academy, but this namesake son and grandson of two famous Navy admirals did know a thing or two about military planning and counter-attacks.

Like all great State political funerals his was stage managed for maximum impact on the nation. The symbolism of the funeral for the 81-year old senator reminded America and the world of what was normal behavior before extreme partisanship set in threatening democracy. Obviously, others believe the lack of authoritarianism is a greater danger.

While the Rocky Mountains are geographically the Continental Divide, this conflict is the real continental divide.

Previously it would have been impossible to consider that a famous American politician, a Republican, twice a candidate for president, would lie in state in the Capital Rotunda. Then have a funeral service at the National Cathedral that would include eulogies from two past presidents, yet the current president was conspicuously off tweeting and playing golf at his own country club course.

McCain’s daughter Megan eulogized her father in contrast to Trump, “America of John McCain has no need to be made great again because it was always great.”

Despite decorum reserved for funerals the mourners burst into sustained applause.

She compared her father’s legacy with the “opportunistic appropriation” and “cheap rhetoric from men who will never come near the sacrifice he gave so willingly.”

There are enough back-stories in all of this for a Bollywood style mini-series, but first some prologue.

In 1967 McCain’s Navy fighter plane was shot down over Hanoi. Surviving massive injuries he then endured years of torture as a prisoner of war because the North Vietnamese knew his father was the Navy admiral commanding the Pacific fleet. Released in the1972 Peace Accord he retired as a Navy captain in 1981 and entered politics from Arizona as a Congressman a year later. After two terms he won election to the US Senate in1986.

Now, some serious back-story on why President Trump takes such pains to make his contempt for John McCain known to all.

For the next decade his war hero fame and Senate service increased respect for McCain as presidential timber. Through activities involved in funding for the Navy’s aircraft carrier Intrepid as a floating museum in New York City’s Hudson River he became friendly with Michael Bloomberg, a then young wealthy businessman who flies planes and helicopters. The two pilots relationship blossomed.

For his generous contributions to the Intrepid Museum the Navy rewarded Bloomberg some acrobatic flying time in a Blue Angeles two seat jet. Bloomberg later told McCain he would provide substantial financial support if John ran for president in 1990 and toned down or abandoned his position against abortion, an issue for a liberal Democrat, which is what Bloomberg then was. McCain said no, but it didn’t harm the friendship between two men who shared more personality traits than just flying.

However, McCain lost the South Carolina primary after the George Bush campaign team unleashed scurrilous attacks based on McCain having a black child in his family, an adoptee from Bangladesh. He lost, crushing his chance for the Republican nomination.

Two years later in the aftermath of the 9/11 terror attack in New York, Bloomberg switched parties and won election as mayor of New York, serving 12 years in all. Trump couldn’t bully or buy any influence with Bloomberg as he had for decades with prior mayors.

Although Trump dodged the military draft during the Vietnam War, he frequently mocked McCain’s status as a prisoner of war, tortured in Vietnam. After casting the deciding vote against repeal of the Affordable Care Act (“Obamacare”) Trump blasted McCain on numerous occasions.  In August  when Trump signed a defense appropriations bill titled in McCain’s name he refused to mention McCain or the Title of the Bill.  The fact that Senator McCain was known by everyone to be dying of brain cancer was ignored by the commander in chief.

Trump’s contempt for McCain and Bloomberg is psychological. Bloomberg became mayor of New York, a job Trump may have desired but could never win given his local reputation as a playboy and bigotry in renting property. Trump is pretend rich.  He doesn’t believe in philanthropy, while Bloomberg has donated billions of dollars to charitable causes around the world. .

Rightwing media sees it all differently, decrying McCain’s deathbed snub of Trump. The Eagle Report: “It wasn’t just President Trump McCain slighted in his last words and edicts. Sarah Palin, John McCain’s running mate in the 2008 Presidential race, was excluded from all of the memorials. Also banned were three of the most prominent members of his 2008 presidential campaign — campaign manager Steve Schmidt, senior adviser Nicolle Wallace and longtime strategist John Weaver.”

McCain is said to have never forgiven himself for letting the GOP pick Sara Palin, as his vice presidential mate. Republican leadership felt that a woman would offset the feared turnout of minority voters for Obama, the first black candidate. The mayor of a small town in Alaska was uniquely unsuited for the job. If Obama was a class choice, she was a crass choice. Obama’s slogan was “Yes.We.Can.” Palin represented people who interpreted it as “No.You.Won’t.”   Trump’s preparation for the job may be no more substantial than hers, but with a public relations image as a rich businessman and TV star, he built on the Tea Party mentality she helped ignite.

Former President Obama took this perspective,” So much of our politics, our public life, our public discourse, can seem small and mean and petty, trafficking in bombast and insult, in phony controversies and manufactured outrage,” Obama said. “It’s a politics that pretends to be brave, but in fact is born of fear. John called us to be bigger than that. He called us to be better than that.”

It was a difficult two weeks for Trump in court cases and in global politics. The tweet count is higher than ever and his threats to fire Attorney General Jeff Sessions continue. The assumption is that a new AG might speed up the end of the special prosecutor probe that started with Russian interference in American elections and seems to now include financial issues with Trump and his real estate company.

American national bi-elections are just eight weeks away and polling, if accurate, suggest Democrats might take control of Congress. That this haunts Trump was clear when he warned evangelical religious leaders to get their people to the polls or risk losing what many believe they gained.

New York Times reporter Peter Baker summed up the funeral: “They also came to mourn an ideal that McCain represented and a town that he once dominated with verve and humor and memorable flashes of temper. Like Mr. McCain, many of the Republicans who attended have found themselves deeply discouraged by their own party’s president. But unlike Mr. McCain, most of them do not say so out loud, for fear of rage by Twitter or retribution by the base. It was almost as if it were a meeting of Washington’s political underground, if the underground met in a grand cathedral with 10,650 organ pipes.”