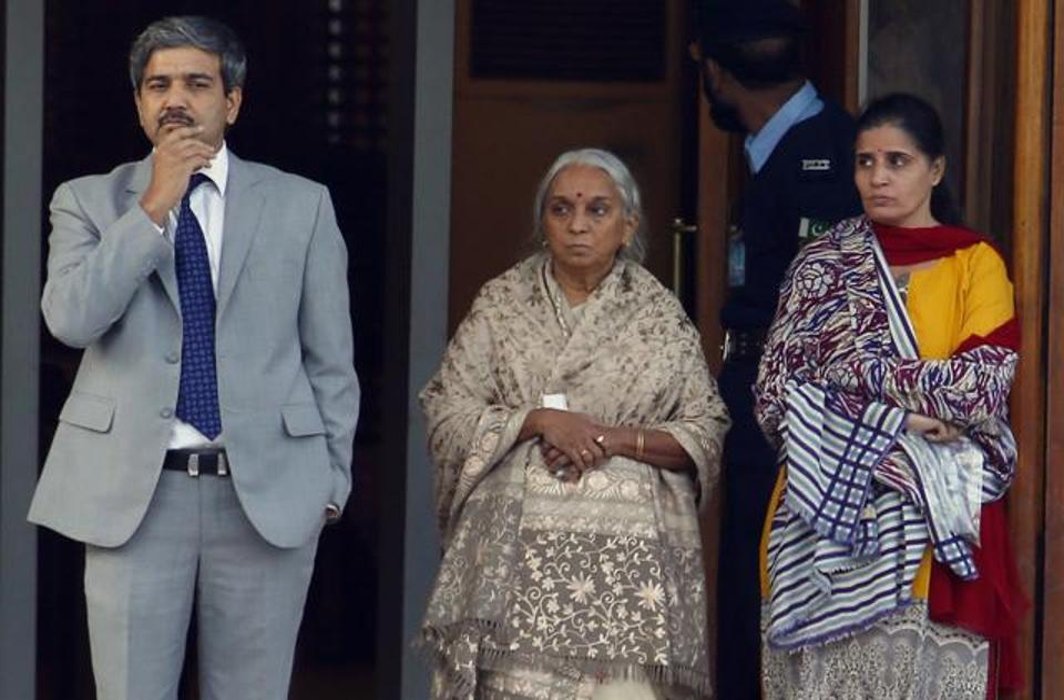 Despite India’s accusation of Pakistan not returning shoes of Kulbhushan Jadhav’s wife, Pakistan Foreign Office on Wednesday claimed to have detected a “metallic substance” in her shoes which were replaced by Pakistani authorities in Islamabad. They have sent the shoes for forensic test.

Following massive criticism from the Indian foreign ministry over alleged harassment of Kulbhushan Jadhav’s wife and mother, during their visit to Islamabad, Pakistan security officials have alleged that spy’s wife’s shoes were retained because of  the presence of some “metallic substance”.

Foreign Office spokesperson Mohammad Faisal said, “There was something in the shoe. It is being investigated. We gave her a pair of replacement shoes. All her jewellery etc was returned after the meeting.”

However, the Pakistan Foreign Office claim is  contrary to what the Ministry of External Affairs claimed yesterday. “She acknowledged that she has got back all her stuff, except the shoe,” said Mohammad Faisal.

A day after Kulbhushan Yadav’s family members met the former Indian Navy official in Islamabad, India on Tuesday called the exercise “lacking in any credibility”. Stating that the “overall atmosphere of the meeting was intimidating”. India said that the ex-navy officer’s mother and wife were forced to change clothes and were also not allowed to interact in their mother-tongue- Marathi.

Ministry of External Affairs (MEA) spokesperson Raveesh Kumar  on Tuesday stated that Pakistan has violated the “letter and spirit of our understanding”.

Kumar further added that the Pakistani officials have disregarded the cultural and religious sensibilities of the family members as the authorities “under the pretext of security precautions… they were asked to remove their mangal-sutra, bangles and bindi“.

However, stating that Pakistan don’t wish to indulge in a “meaningless word of words”, the FO spokesperson said, “If Indian concerns were serious, the guests or the Indian DHC [deputy high commissioner] should have raised them during the visit, with the media, which was readily available, but at a safe distance, as requested by India.”

Kulbhushan Jadhav – who was accused by Pakistan for allegedly spying on behalf of India’s Research and Analysis Wing (R&AW) – is in Pakistan’s custody and is facing death row with charges of terrorism and spying. While Pakistan continues to maintain its position in the charges leveled against the former Indian Navy officer, India on the other hand denied all charges and had moved the International Court of Justice (ICJ) to secure his release.

More than a year after his arrest, Pakistani authorities finally permitted Jadhav’s family members to meet him on Monday. However, Jadhav’s mother and wife could only interact with him over a telephonic conversation – with a glass panel separating the visitors from the accused.

And while Jadhav was not allowed to speak privately with his family, many term the meeting as a mere PR exercise from Pakistan. India’s Deputy High Commissioner was also present during the meeting – though he was not allowed  to interact with Jadhav.

Pakistan claimed of honoring the “commitment’ and shared photos of the 45-minute long meeting on Twitter. The Pakistan’s move to grant permission to Jadhav’s family members to visit Pakistan came ahead of the forthcoming hearing of India’s appeal against Jadhavv’s death sentence at the International Court of Justice at The Hague.