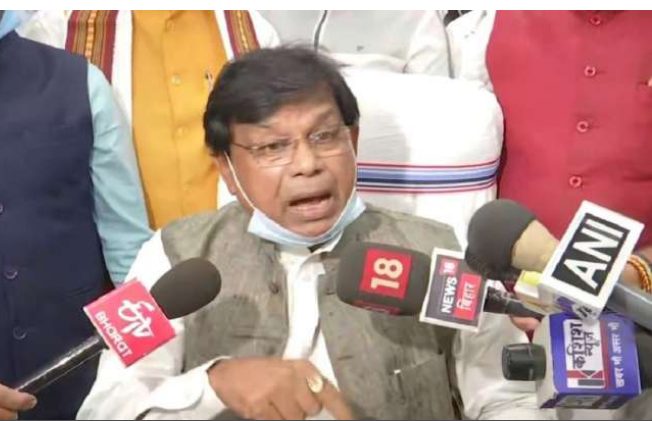 Bihar’s newly-sworn education minister Mewalal Choudhary resigned his post on Thursday after the opposition highlighted charges of corruption against him. Choudhary was installed as minister on Monday. His continuance in the cabinet was making life difficult for Chief Minister Nitish Kumar since the opposition had mounted an aggressive campaign to oust Choudhary.

In 2017, Nitish Kumar himself suspended Choudhary over the irregularities in appointments for posts of assistant professor and junior scientist during his tenure as Vice Chancellor of the Bihar Agriculture University in Bhagalpur district. Kumar had suspended after an FIR was lodged against him at Sabour police station in Bhagalpur. Choudhary was booked under Sections 409 (criminal breach of trust), 420 (forgery), 467 (forgery of valuable security), 468 (forgery for purpose of cheating), 471 (using as genuine of forged document) and 120 (B) (conspiracy) of the Indian Penal Code (IPC).

In a series of tweets, Tejashwi Yadav accused Nitish Kumar of appointing criminals to retain power in state. In a tweet, Tejashwi said by appointing Mewalal Chaudhary, Kumar has granted criminals leeway to loot and rob the state and Kumar will continue with his discourse on crime, corruption and communalism to save his chair, Yadav had tweeted recently.

On Wednesday, the Rashtriya Janata Dal shared an old video of Choudhary mauling the rendition of the national anthem. The RJD tweeted that Choudhary does not even know the national anthem. In the video, Choudhary, surrounded by children and a few adults, could be seen struggling to recite the national anthem during a flag-hoisting ceremony in what looks like a madarsa. The minister started correct, but a few seconds later forgot the lines and then ended up creating a different anthem. At the end of the clip, children joined the minister’s slogans of Bharata Mata Ki Jai and Vande Mataram. Choudhary is now with the BJP after a long innings in the Janata Dal United.

Also Read: Kapil Sibal was not in the list of campaigners for Bihar, say sources close to him

The Nitish Kumar government had faced strong criticism over Choudhary’s appointment as the Bihar education minister.