“Migrants’ movement has been politicized”

Panelists say that government needs to be clearer in its policies for the poor. 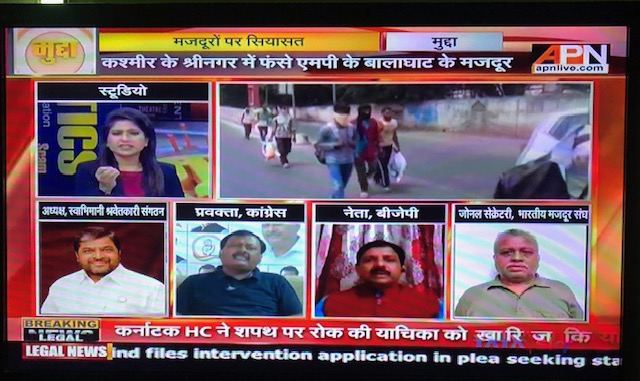 Controversy over the Railways charging train fare from stranded migrants has triggered a political slugfest. The Congress has announced that it will pay for the travel of the migrants. The government claims no fare will be charged from them. APN’s popular debate Mudda discussed the development. Anchorperson Neha Dubey discussed the issue with panelists including the BJP’s Anand Sahu, Congress’s Surendra Rajput, Swabhimani Shetkari Sanghatan’s Raju Shetty and Bharatiya Mazdoor Sangh general secretary Pawan Kumar.

Sahu said: “The Railway Ministry has condemned such baseless allegations of charging fare from the migrants. This is rumour mongering in times of a crisis.”

Rajput said: “Anand Sahu’s party’s in the government. They will say that we are lying. Are the migrants lying too? They have proof of paying for the tickets. It is sad that they are grabbing political mileage out of such an issue. They need to apologise for the lapse.”

Shetty said: “Labourers do not have money for food. The government is lying. Now they are going home and the government is asking for fare. This is being unfair to the poor; they are suffering.”

Sahu said: “I would like to explain that this is just an attempt to make news out of nothing. Centre has nothing to do with this. Where has this ticket issue come up?”

Rajput said: “It is highly unfortunate that those politicizing the issue should blame it all on the Congress. We have always stood for the poor, and would like to cooperate with the government in all its good work. Even the Prime Minister has praised works in Punjab and Chhattisgarh. The BJP is trying to label the poor as liars. I have the Government Circular stating that nominal fare would be taken. It is highly shameful and regrettable that the migrants have been left to languish. Ration kits must reach the poor. Why the BJP people cannot accept its mistake?”

Kumar said: “Despite distributing ration kits, the labourers want to go back home. The government wants to open industry. It can’t do that without labour. There is a lot of confusion at this stage.”

Shetty said: “All workers want to go back to the village to feel secure. There is a lot of distrust.”

Kumar said: “Back in villages also, migrants are not welcome due to fear of the coronavirus.”

Sahu said: “Prime Minister Modi has taken all steps necessary for the safety of the poor. All measures for lockdown or quarantine are for the poor. The special trains running now are only for the benefit of the migrant labourers so that they can go back to the village and till their land. Allegations against government’s efforts is low-level politics at its worst.”

Rajput said: “If people trusted the government, such a controversy would not have risen in the first place. It is the centre’s job to make the labourers feel safe and secure. The migrants’ desperation has been so obvious… they have been prepared to walk miles to go back home.”

Kumar said: “So many governments came and went, but the labourers’ plight remains the same. They wait for seasonal work, and in times of crisis, their plight is the worst. What good did the Congress do?”

Sahu said: “Modi’s efforts to alleviate the state of the poor will go down in history. A case in point is the Mudra Yojana to provide loans to small enterprises.”

Rajput said: “Holistic policies for the poor are needed. For the labourers, all-round economy must be seen. A lot of improvements are needed. We have seen how aimless the government’s policies have been.”