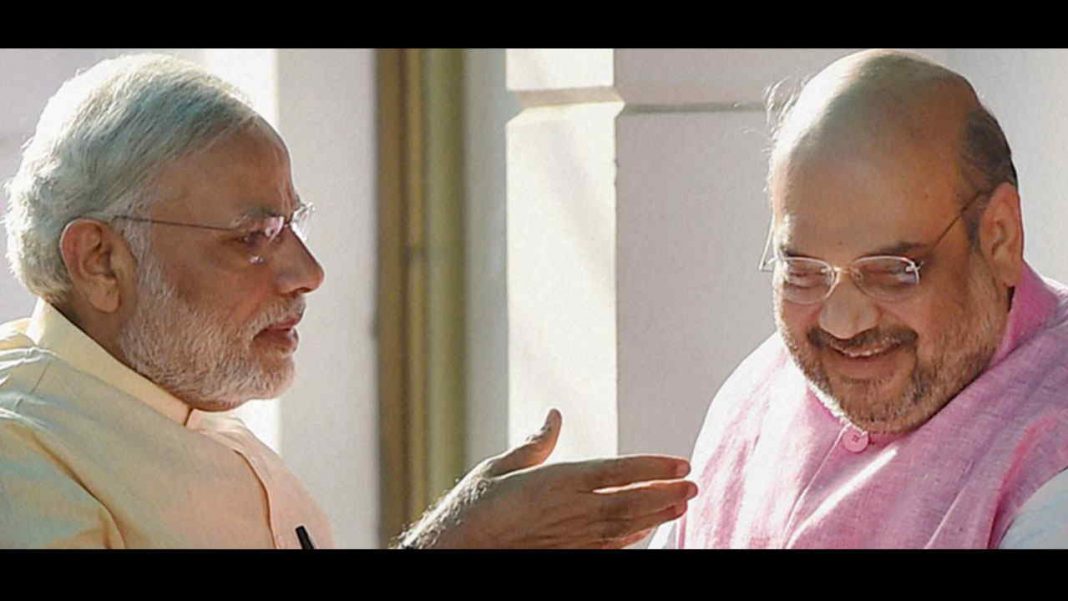 Already the dominant national political party, BJP is vigorously pursuing an action plan to consolidate and expand its base and reach in the country while decimating its rivals. While the opposition is in a disarray with Congress and other smaller parties clueless and without any idea of how to redeem their fortunes, BJP president Amit Shah is already busy gearing up the party for future elections.

The BJP is no mood to give any quarter to its rivals: this is the stamp of Narendra Modi and Amit Shah style of politics. Every election matters and the party has to constantly acquire more power, expand its strength and win, as Shah memorably put it, everything ‘from the Parliament to the Panchayat’.

Shah is on a 110-day countrywide tour which began from Jammu in April this year to mobilise and prime the party for ‘Mission 2019’ – the next Lok Sabha election, two years away. His tour of Uttar Pradesh, where the BJP already has a government firmly in place, dealt a blow to the opposition rival camp by setting off defections from other parties.

He is now in Haryana on a 3-day visit since Wednesday to review the working of the State government, which completed 1,000 days last month, and also assess the political situation in Haryana. Shah will be attending 27 programmes, including 17 meetings with BJP MLAs and others. He would take stock of the political situation in Haryana and decide on a future course of action to help the State government perform better. “The Cabinet ministers will give presentations on the performance of their departments while Shah will take feedback from the chairmen of various boards,” said a BJP leader.

His first meeting was with district presidents, district general secretaries and office-bearers of the BJP, chairmen of boards and corporations, and state cabinet led by chief minister Manohar Lal Khattar. He asked party workers to strengthen what he called the “world’s largest democratic party” at the grassroots level and work for ‘Mission 2019’ with fresh zeal. Addressing the office-bearers, Shah stressed on launching intensive door-to-door campaigns to inform all sections of the society about schemes and policies initiated by the government in Centre and state.

He said the BJP government led by Prime Minister Narendra Modi has introduced 106 schemes in the country for youths, farmers, women and labourers. “We introduced a new scheme in every 15 days of our government for the welfare of the people. It is utmost important that these schemes reach their beneficiaries as well,” Shah said.

Party workers were told to reach out to the public and redress people’s grievances through ‘CM Window’ and monitoring committees. He took feedback from workers and sought suggestions on how the BJP could do better, how to strengthen the BJP at every single booth in the state, so that it wins all the 10 Lok Sabha seats in the 2019 general elections.

Lauding the performance of his party’s governments, he supplemented it with a scathing attack on Congress and its leadership. Addressing a rally, Shah said “Gandhi ji ne kaha tha azadi ke turant baad Congress ko bikher dena chahiye… khair wo Gandhi ne nhi kiya ab koi Gandhi kar rha hai (Mahatma Gandhi had asked to dissolve Congress immediately after independence… that Gandhi did not do it, now some other Gandhi is doing it).”

On the concluding day of his visit, Shah will address some meetings where the focus will be to work hard on ‘vistarak yojna’ (expansion plan) which was initiated across the country to strengthen BJP in view of the 2019 Lok Sabha polls.

Not one to miss out even on smaller token gestures, Shah is also scheduled to have lunch at the house of one of the party’s Dalit workers before he returns to Delhi on Friday evening.

Shah chose Rohtak for his Haryana leg of the tour, a politically significant move as Rohtak has been the traditional stronghold of former Haryana Chief Minister and Congress leader Bhupinder Singh Hooda. Besides the lone Congress MP Deepender Hooda, majority of the 15 Congress MLAs in the current Haryana Assembly are also from the Rohtak-Sonipat belt.

Every effort was made to keep his programme in public eye. The BJP president was received with much fanfare, right from Delhi-Haryana border upto Tilyar Convention Centre in Rohtak, where he chaired his meetings for Wednesday. Thousands came on road to welcome Shah with flowers. CM Khattar and BJP state president Subhash Barala welcomed him with turban (pagdi). Agriculture minister OP Dhankar then welcomed him with a mace (gada).

All Haryana ministers, including Chief Minister Manohar Lal Khattar are in town to welcome Amit Shah. Private schools in Rohtak district in Haryana declared holiday on Wednesday as their buses were deployed for the rally organised to welcome BJP national president Amit Shah, in contravention of a recent ban imposed by the state on using school buses for political rallies. But such minor aberrations from norms or law are par for the course in the march of the BJP juggernaut.

Shah will be visiting Tamil Nadu from August 22. The party has been making concerted efforts to fill the political space created by Jayalalithaa’s death and Karunanidhi’s retirement from active politics.