Mithun Chakraborty debuts as BJP leader with new slogan, I am cobra, my one bite is enough 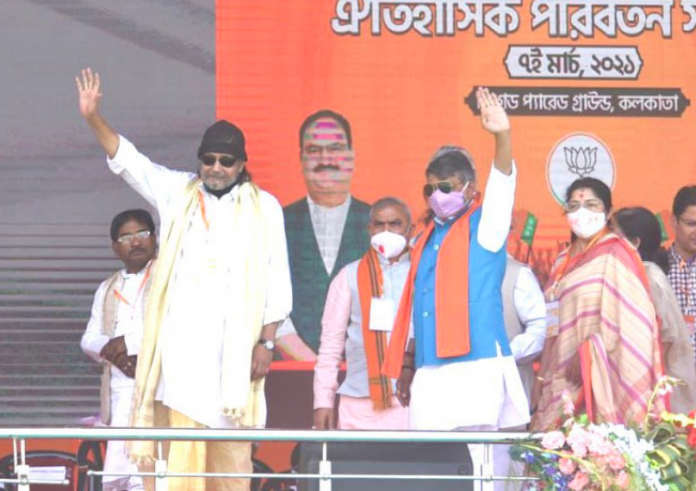 Veteran actor Mithun Chakraborty on Sunday joined the Bharatiya Janata Party (BJP) at Kolkata’s iconic Brigade Parade Ground. After joining the party, the veteran actor issued a slogan saying he is like a cobra, his one bite is enough to turn someone into a photo.

While pointing out at the opposition, the 70-year-old actor said, do remember this dialogue before starting the campaign. Chakraborty said his name is Mithun Chakraborty he does what he says.

In another warning, Chakraborty used a dialogue from one of his films called MLA Fatakeshto, and said, Marbo ekhaney… lash porbay shoshaney (I will thrash you here and your dead body will be found in a crematorium).”

Addressing the people at the rally, Chakraborty said his dream of helping the poor was being fulfilled by the BJP. He said he is a Bengali and believes anyone who has grown up on here has a right over this land. I promise to stand up and fight for the rights of every person living in West Bengal, Chakraborty said.

In the rally, Chakraborty said being middle class and coming from a small locality in North Kolkata called Jorabagan, he used to dream of becoming something big, but he never imagined that he will get a chance to share a stage with one of the biggest political leaders of the country, including Prime Minister Narendra Modi, he said.

Chakraborty was welcomed into the BJP party by the national general secretary of the BJP’s Kailash Vijayvargiya and state party chief Dilip Ghosh among others.

Mithun Chakraborty was born as Gouranga Chakraborty in Bengal, later he had re-christened himself as Mithun. Chakraborty is an Indian film actor, singer, producer, writer, social worker, entrepreneur, television presenter and a former Rajya Sabha Member of Parliament. He is the recipient of two Filmfare Awards and three National Film Awards.