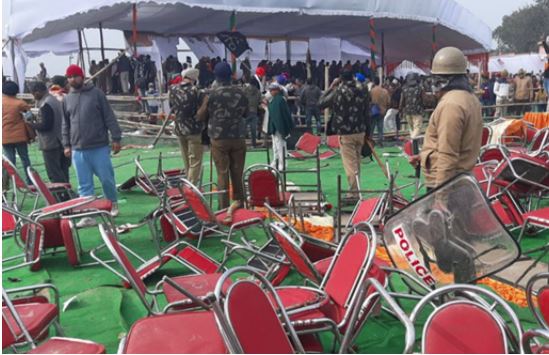 The Haryana Chief Minister Manohar Lal Khattar cancelled his Kisan Mahapanchayat Programme in Kaimla village of Karnal district after a group of protesting farmers vandalise the venue. Khattar was expected to speak of the benefits of the Centre’s three farm laws at a farmers’ meet in Kemla village.

The Haryana police had started the crackdown on the protesting farmers, when they tried to enter the Kemla village, using tear gas shells and water cannons. But the farmers had managed to enter the village and reach the venue of the meeting.

From the early hours of Sunday, heavy police deployment were seen at the Kaimla village as the Haryana Chief Minister is scheduled to hold meeting with a farmers gathering to hold support for the new farm laws that have triggered nationwide unrest.

On Friday, the local protesters had clashed with local BJP workers who are promoting the Khattar’s visit. The face-off started when the villagers didn’t allow the farmers to enter into the village to register their protest.

The Chief Minister of Haryana Manohar Lal Khattar is scheduled to address a farmers’ gathering at the village to tell the benefits of the Centre’s three farm laws passed in September. Countering the supporters of farmers protest, the Central government had decided to conduct a huge outreach programme to dispel misconceptions about the laws.  But over the last week, the Chief Minister’s outreach programme had run into trouble in this area as farmers hardened their stance in Delhi.

BJP-ruled Haryana had made headlines in November when it decided to stop the farmers on way to Delhi from across the state as well as those in Punjab. Reports and video footage of police clashing with farmers, employing barricades, water cannons, tear gas, and batons circulated for days afterwards.

Last week, Haryana police used tear gas to disperse protesting farmers in Rewari district, as they were marching towards Delhi to join the farmers’ stir.

Asking to stop Kisan Mahapanchayat in Kaimla village, Randeep Surjewala said don’t play with sentiments of those who provide us with food, please stop meddling with the law and order situation.  He tweeted that if the government want to communicate something, do it with the Annadata who has been staging the borders for the last 46 days.