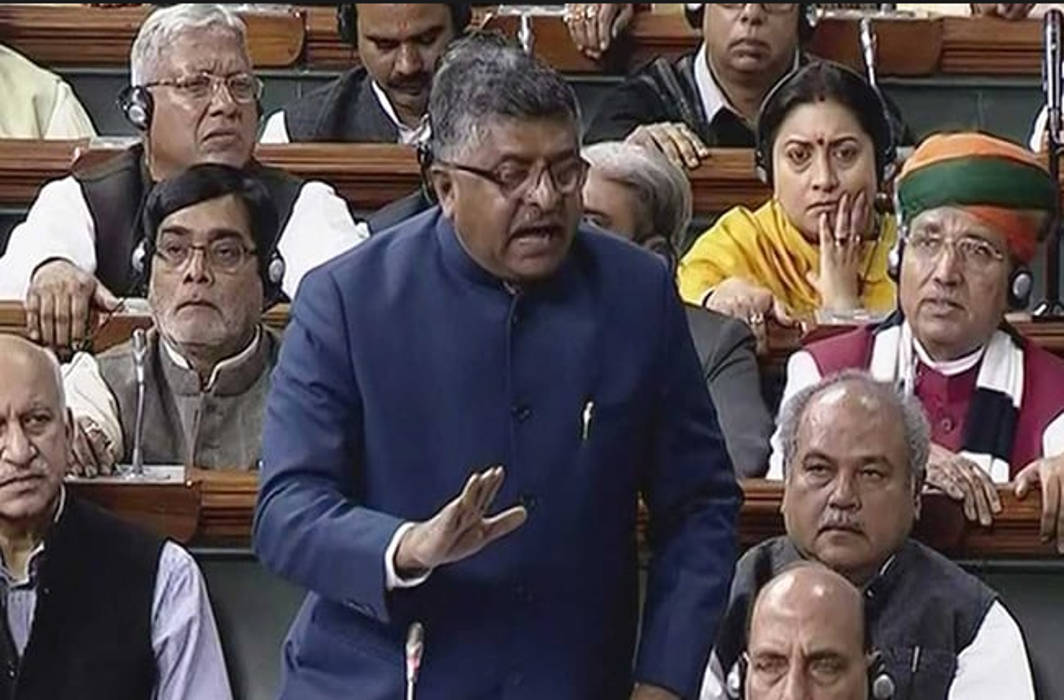 Modi government introduced a fresh bill to ban the practice of instant triple talaq in the Lok Sabha today (Friday, June 21) as the previous Bill got stalled in Rajya Sabha and lapsed with the dissolution of the 16th Lok Sabha.

The Muslim Women (Protection of Rights on Marriage) Bill, 2019, will replace an ordinance issued in February by the previous BJP-led NDA government. In absence of legislation, the government had brought in the Ordinance to make instant “triple talaq” illegal, which was renewed twice. The new bill is a copy of the ordinance.

Opposition members demanded that the Bill should not be introduced before wider consultation involving parties from the other side of the treasury bench. In the view of opposition, Speaker Om Birla called for a voice vote and ruled that the Bill could be introduced in the Lok Sabha. But then the Opposition members insisted on division of votes. The Bill was finally tabled in the Lok Sabha with 186 votes in favour and 78 against introduction of the legislation.

The main objection of the Opposition is to the provision in the Bill to make the practice of instant triple talaq (talaq-e-biddat) a penal offence. They argued that jail term for a man for divorcing his wife was legally untenable. Under the Muslim Women (Protection of Rights on Marriage) Ordinance, 2019, divorcing through instant triple talaq is illegal, void and will attract a jail term of three years for the husband.

Marriage or divorce is a civil matter and their objection is to bringing in criminal provisions.

The government has included certain safeguards in it such as adding a provision for bail for the accused during trial so that the proposed law could not be misused.

The government countered the opposition’s claim that it was a “discriminatory” bill by pointing out that the Supreme Court’s order banning the controversial Islamic practice needs to be followed up with a strong law. “…There have been triple talaqs since 2017 even after the judgement. What should the women do? Hang the judgement on the wall?” Union Law Minister Ravi Shankar Prasad said after introducing the bill in the Lok Sabha.

Union Law & Justice Minister & BJP leader Ravi Shankar Prasad, after Triple Talaq Bill 2019 introduced in Lok Sabha, said: “It is the work of Parliament to enact a law. The interpretation of the law should be left to the courts.”

“People have chosen us to make laws. It is our work to make laws. Law is to give justice to the victims of triple talaq,” he said.

He added that the Bill will protect the rights of Muslim women. “It is about justice & empowerment of women,” he said, reported news agency ANI. “This issue is not related to religion or prayer or class but of justice for women, of a woman’s dignity”, he said.

Asaduddin Owaisi, AIMIM lawmaker, opposed the triple talaq bill, calling it discriminatory. Besides, he asked, if the husband is jailed (under the provisions of the law), who will pay maintenance to the woman.

Owaisi also took a dig at the BJP, saying the party has so much affection for Muslim women but is opposed to rights of Hindu women to enter Kerala’s Sabarimala Temple in Kerala. He went on to say that the bill violates constitutional rights as it stipulates three-year jail term for Muslim men while non-Muslim men get only one year of jail term for a similar offence, he said.

Soon after the minister tabled the bill, Congress MP Shashi Tharoor, stood up to speak on the issue and listed the reasons for his opposition to the bill.

Tharoor who said even as he is against instant talaq, he is opposed to considering a civil offence as a criminal offence. He suggested the scope of the Bill should be extended to women of all communities.

Terming the bill a “class legislation”, Tharoor said abandoning of women by their husbands is not unique to Muslim community and is equally prevalent among other communities. So, why not make a universal law to provide protection to all women, he argued.

“Men from other religions also desert their wives,” Tharoor said. “There is no procedural safeguards in the bill, refer it to a standing committee… it is a discriminatory bill. The bill does nothing to improve the status of Muslim women,” he said.

Only 187 members were present to vote in the Lok Sabha and many absentees were from the treasury benches, said a NDTV report. Mamata Banerjee’s Trinamool Congress, which didn’t want to be seen as opposing the bill, abstained from voting. Jagan Mohan Reddy’s YSR Congress Party also abstained. Nitish Kumar’s Janata Dal United, an ally of the National Democratic Alliance (NDA), has said the party will not back the “triple talaq” bill. Naveen Patnaik’s Biju Janata Dal is not keen on supporting the bill.

Most opposition parties, including the Congress, were opposed to stringent provisions like jail term for the husband. They contended that a penal provision cannot be introduced in a domestic issue that’s essentially civil in nature and that the bill, in its current form, would end up victimising the Muslims.

The government argues that the bill would stop victimisation of the women, and give them equal rights. The proposed law is based on gender equality and is part of the government’s philosophy of “Sabka Saath, Sabka Vikas, Sabka Vishwas,” Union Minister Prakash Javadekar said last week.