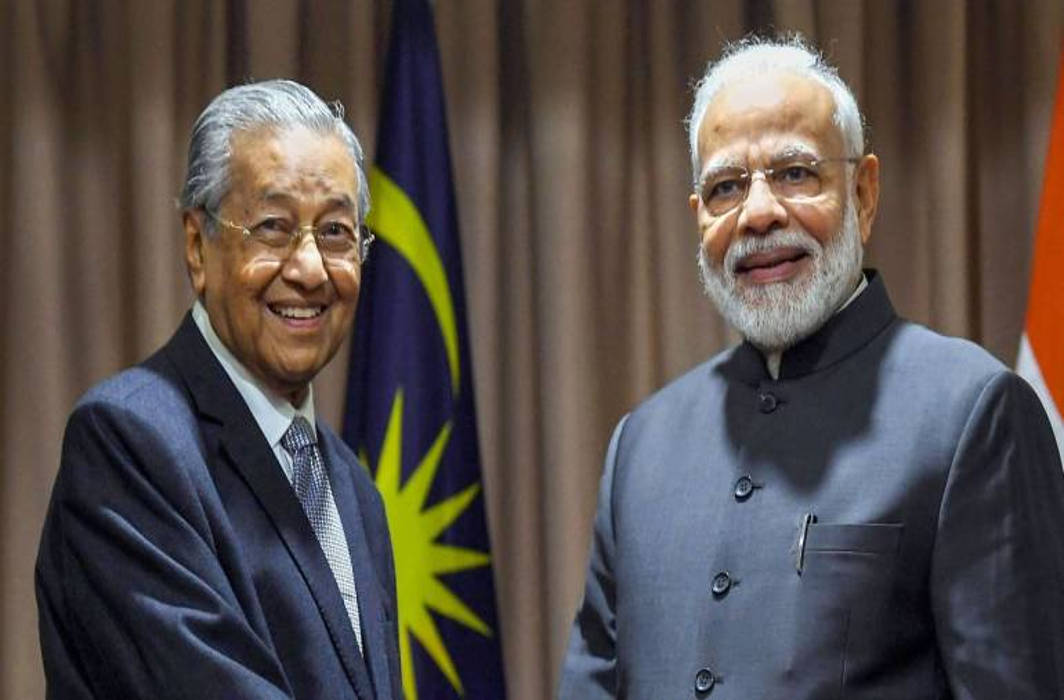 Prime Minister Narendra Modi on the second day of his Russia visit on Thursday (September 5 ) met Malaysian Prime Minister Mahathir bin Mohamad and explained the rationale behind his government’s decision on Jammu and Kashmir. He also sought the extradition of radical televangelist Zakir Naik, wanted in India for alleged money laundering and inciting extremism.

“Had a great meeting with Tun Dr. Mahathir Mohamad, Prime Minister of Malaysia. We talked about bilateral ties between our nations and ways to further diversify cooperation,” Modi tweeted.

Had a great meeting with Tun Dr. Mahathir Mohamad, PM of Malaysia. We talked about bilateral ties between our nations and ways to further diversify cooperation. @chedetofficial pic.twitter.com/d8rwdTvuCt

Briefing reporters on the meeting, Foreign Secretary Vijay Gokhale said Prime Minister Modi discussed with Mahathir the “reorganization” and the developments related to Jammu and Kashmir. The growing threat of terrorism also figured in their talks.

“Prime Minister Modi explained to Mahathir the rationale behind the reorganization of the state of Jammu and Kashmir, in terms of both giving effective governance and delivering socio-economic justice. And in that context the two leaders discussed the focus was on terrorism, on how to combat the growing threat of terrorism,” Gokhale said.

“Prime Minister Mahathir acknowledged that terrorism was a global problem and Malaysia is against any form terrorism,” he added.

“Both the parties have decided that our officials will stay in contact regarding the matter and it is an important issue for us,” the foreign secretary said.

Naik, a 53-year-old radical television preacher, left India in 2016 and subsequently moved to the largely Muslim Malaysia, where he was granted permanent residency.

He is wanted by Indian authorities since 2016 for alleged money laundering and inciting extremism through hate speeches. He has been banned from any public activities in the multi-ethnic country after his remarks against Malaysian Hindus and Chinese on August 8.

This is the second meeting between the two leaders; the first was in May last year when Prime Minister Modi called on Mahathir in Putrajaya after the 94-year-old leader won the general election.

Gokhale said there was also discussion on trade and ways to diversify the bilateral ties to benefit people in both the countries.

“Prime Minister Mahathir acknowledged that there was a growing trade between the two countries, but that Malaysia had a surplus in trade. He assured Prime Minister Modi that while we should grow this trade, Malaysia is looking at ways by which we can balance this trade,” Gokhale said.

Prime Minister Mahathir said, Malaysia would consider importing more from India so that India”s exports to Malaysia grow, he said.

PM Modi arrived in Russia on Wednesday to participate in the 20th India-Russia annual summit and the fifth meeting of the Eastern Economic Forum (EEF).

The EEF focuses on the development of business and investment opportunities in the Russian Far East Region and presents enormous potential for developing close and mutually beneficial cooperation between India and Russia in the region.