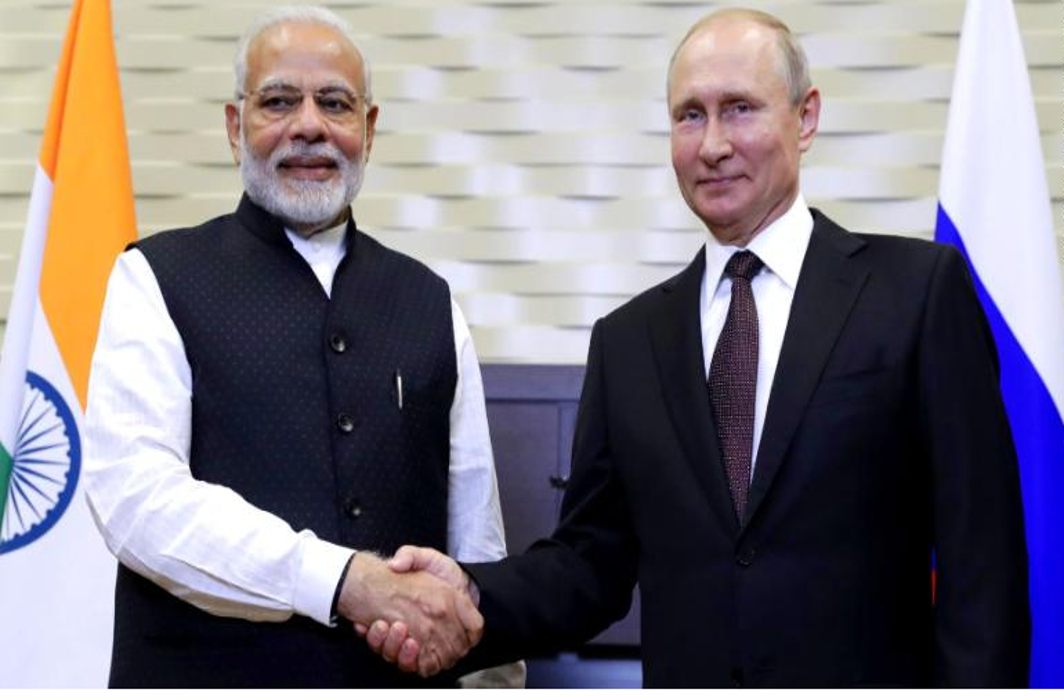 Both leaders discuss bilateral and international issues during informal talks

“Russia is India’s old-time friend. We share long-standing historical ties, and Mr. President is my personal friend and a friend of India,” Modi said at the meeting.

“For the past four years, you and I stood side by side in the bilateral format and on the international stage… I am very glad that it was so,” Modi told Putin.

The Russian president reciprocated with similar sentiments, stressing the important role the two countries play in maintaining global stability. “Last year, our trade saw a significant increase, adding another 17 percent since the beginning of this year,” Putin said. The major international issues were the focus of the talks between the two leaders, report said.

According to Russian official TASS news agency, Foreign Minister Sergei Lavrov said that the economic cooperation was in focus during the two leaders meeting. “They discussed the entire spectrum of our privileged strategic partnership. Special attention was focused on economic cooperation. They noted stable growth in bilateral trade,” he said.

The two leaders discussed possible steps to be taken to ensure the economic component of an upcoming summit to be held in India in early October. “In this context, they hailed the successful work of a joint group of priority projects and the activities of relevant government structures working out a new mechanism, as well as a strategy of actions on trade-and-economic and investment cooperation,” Lavrov said.

According to reports, Prime Minister Narendra Modi invoked former PM Atal Bihari Vajpayee at least seven times in his opening remarks during his talks with Russian President Vladimir Putin to underline the strong ties between the two “strategic partners”. Vajpayee was the prime minister when Putin became Russian President for the first time in 2000.

Modi quoted Vajpayee as saying during Putin’s visit to India in 2000, “Being a friend of Russia for a long time, we want to see Russia as a strong and confident country having an important role in the multi-polar world.”

In Lavrov’s opinion all these processes match well the current developments within the framework of the Shanghai Cooperation Organization (SCO) and the relations developing between our countries and the ASEAN member-states.

“It is a major Eurasian project, as President Putin once described it. It is an imperative of the course of life. It does not shut the door to anyone and remains open to all countries, which in this fast geopolitical space can cooperate to mutual benefit,” he said.

Lavrov went on to say that Russia and India had discussed other aspects of cooperation in international affairs, including that in the United Nations, the troika Russia-India-China, the BRICS group and the SCO.

“Preparations were discussed for the forthcoming SCO summit, due in China’s Qingdao in early June,” he said. Russia and India would pay special attention to the program for action in the struggle against extremism, separatism and terrorism. Lavrov said that Russia had reaffirmed its support for the Indian initiative, being discussed in the United Nations for a comprehensive convention on struggle against terrorism. “We fully support this initiative,” Lavrov said.

At the end of the one day visit, in a rare gesture, Russian President Vladimir Putin saw PM Modi off at the Sochi airport.

Farewell, my friend! In a special gesture symbolizing our friendship, Russian President #Putin personally bid farewell to PM @narendramodi at the airport at the conclusion of PM’s short but successful visit to Russia. pic.twitter.com/uK8mqGfiip