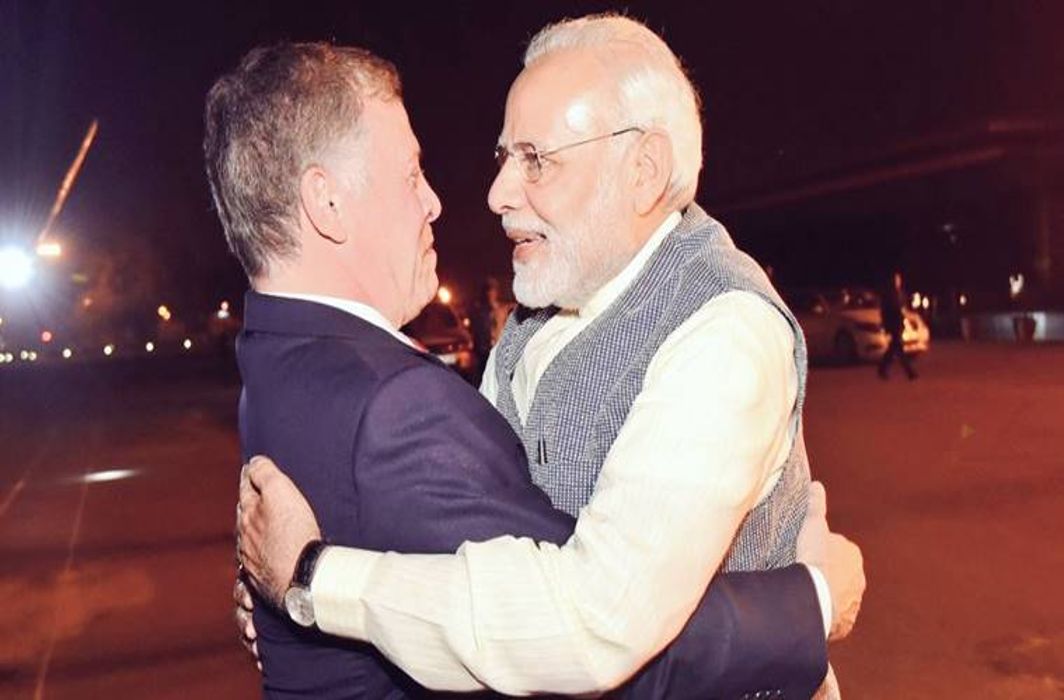 Prime Minister Narendra Modi, has once again broken protocol and received Jordan‘s King Abdullah II at the airport in Palam Technical Area who arrived in the capital on a three-day state. This is the seventh time when PM chose to break protocol for giving special respect for the visiting dignitary.

PM Modi welcomed King Abdullah with a warm hug as he alighted from the aircraft. Both leaders will sit together for a formal meeting on Thursday and discuss the way to strengthen bilateral ties in key areas including defence and security.

Welcomed His Majesty King Abdullah II to Delhi. It’s wonderful to meet him again, after my brief halt at Amman earlier this month. His visit to India will further deepen bilateral ties between our nations. I look forward to our talks on Thursday. pic.twitter.com/MUWsd3rxyj

King Abdullah is considered to be one of the close allies of Israel, having peace treaty with Tel Aviv. He is also known for his initiative to fight radicalisation and terrorism. Under an agreement between Jordan and Palestine, King Abdullah II is the custodian of Al-Aqsa mosque, the third most sacred sites for the Muslims.

This is King Abdullah’s second visit to India after his visit along with Queen Rania in 2006.

The visiting dignitary will be formally received at Rashtrapati Bhavan on Thursday, which would be followed by his visit to Gandhi Samadhi for paying tributes to the father of nation Mahatma Gandhi.

He is also scheduled to, address an event on “Islamic Heritage: Promoting Understanding and Moderation” at Vigyan Bhavan. The event, organised by India Islamic Cultural Centre, will be attended by Islamic scholars and think-tank representatives, and influential leaders from the Muslim community, apart from representatives from the Arab world.

Prime Minister Narendra Modi will also attend the event. This is for the first time in last four years that an event of this magnitude is being organised in honour of a visiting dignitary from Middle East.

President Ram Nath Kovind will host a banquet in honour of King Abdullah while Vice President M. Venkaiah Naidu will call on the visiting dignitary.

King Abdullah will hold talks with PM Modi on Thursday during the course of which the two sides will discuss the entire gamut of bilateral relations as well as regional and international issues of mutual interest.

Among the proposed agreements between the two countries include a framework on defence cooperation, a twinning agreement between archaeological sites in Agra and Petra (Jordan), establishment of a centre for excellence in Amman by the Centre for Development of Advanced Computing (C-DAC), and some agreements on health, culture, customs are on the table.

He will hold meeting with President Ram Nath Kovind  on Thursday evening before his departure.

Earlier this month, King Abdullah hosted PM Modi at his residence in Amman while he was on his way to Palestine. Royal Jordanian helicopters took PM’s delegation to Ramallah where he met Mehmoud Abbas, the President of Palestinian Authority. Israel provided security during the chopper sortie in the most troubled region.

Donald Trump hints at running for 2024 US election, tells guests he will be in White House in another four years

Prime Minister Narendra Modi invited Johnson during a telephonic conversation on November 27, while the UK PM invited PM Modi to the G-7 summit in the UK next year.
Read more

Gandhi took to Twitter and cited different statements of PM Modi, the ruling government and Bharatiya Janata Party in regard to the Covid-19 vaccination establishment programme and asked what does the Prime Minister stand by.
Read more