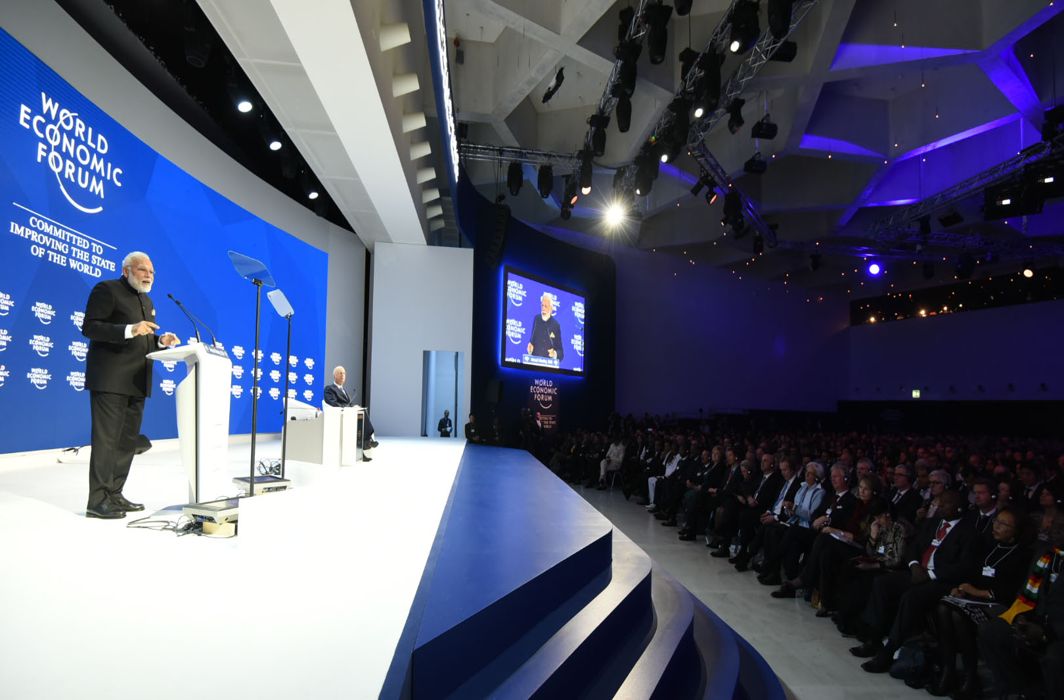 Delivering the keynote address at the opening of the World Economic Forum meeting in the Swiss mountain resort of Davos on Tuesday, January 23, Modi, who spoke in Hindi, talked about India’s economic progress and sought to highlight its business friendly approach and ease of doing business in the country to woo international investment.

PM Modi is the first Indian Prime Minister to give the plenary speech at the WEF and the first to attend the Davos summit in 20 years, since HD Deve Gowda’s visit in 1997.

Receiving a rousing welcome, PM Modi thanked the people and Government of Switzerland and said he was happy to be in Davos to address the World Economic Forum. “This Summit seems to find solutions to the various problems the world faces,” he said.

PM Modi recalled that the last time an Indian PM attended the WEF 21 years ago, “India’s GDP in 1997, when the last PM came to Davos, was a little over 400 billion dollars. It has grown six times since.”

He said today, technology driven transformation is deeply influencing the way we behave, the way we talk to each other, also influencing politics and the different aspects of our life, stressing the importance of social media and data. He also pointed out that these new technologies have brought new challenges as well.

At a time when technologies unite us, the same technology has fractured us, created barriers between us, and these barriers has increased poverty and unemployment too, he said.

Today data is the wealth and its global flow is creating both opportunities and challenges, said Modi. Technology is assuming immense importance in this era and is deeply influencing the way we behave, politics and various aspects of our life, he said.

Underlining the importance of technology, the PM said data is the real wealth in the present era. “Today, data is a real wealth and it is being said that whoever acquires and controls the data will have hegemony in the future. The global flow of data is creating big opportunities as well as challenges,” he said.

He added that technology-driven transformation has been deeply affecting people’s way of thinking, working, international groups, politics, and economy.

Talking about social media, Modi said, “The example of breaking, addition, and twisting of technology is being seen in the form of social media.”

The theme for this year’s WEF is “Creating a shared Future in a fractured world”. New forces are changing the balance between economic and political strength, Modi observed, saying this is indicating a change in future of the world. “World is facing challenges in maintaining peace, stability and security,” he said.

Modi spoke about the theory of ‘Vasudeva Kutumbakam’ to highlight the need for the world to come together as a family to solve common challenges such as global warming. We need to work together to find a solution for climate change. Very few countries back words with resources to help developing countries fight climate change.

Climate change is the first major threat to human civilization right now, snow in the Arctic is melting, many islands are sinking or are about to sink, extreme weather conditions are being felt, he said. “Everyone is talking about cutting down carbon emission. Technology will have a big role to play,” he said.

Modi recalled Mahatma Gandhi’s Principle of Trusteeship to use things according to one’s need, saying he was against use of anything for one’s greed. “We’re today exploiting nature for our greed. We need to ask ourselves if this is our progress or regression,” Modi said.

Asserting that Indians are environment-friendly, Modi elaborates on the India-led global solar alliance to tap the renewable energy resources.

He listed terrorism and protectionism as the other two major challenges to human civilization. “Terrorism is a big threat but what is equally dangerous is artificial distinction made between good and bad terrorist,” said the PM.

He spoke of the threat of protectionism in a world that was getting smaller and more inter-connected. He said many societies and countries are becoming self-centred. Such misplaced preferences can’t be considered any lesser threat than terrorism or climate change, he said.

“Many societies & countries are becoming self-centred. It seems that globalisation, as opposed to its definition, is shrinking. Such misplaced preferences can’t be considered any lesser threat than terrorism or climate change. We must admit shine of globalisation is fading,” Modi said.

He quoted Mahatma Gandhi: “I will open my doors and windows to welcome breeze from other nations, but until they don’t make me feel cold”, adding this is the government’s policy on globalisation.

Quoting Rabindranath Tagore, he said Tagore had dreamt of a heaven of freedom “where the World has not been broken up into fragments by narrow domestic walls.” Let us join hands to make the world such a “heaven of freedom” and not divide or fracture it, Modi said.

Modi also said that his government’s motto is ‘development for all’. “In 2014 after 30 years, the 600 crore Indians provided complete majority to any political party to form govt at the centre. We took the resolution for the development of everyone and not just a specific group. Our motto is ‘Sabka Saath Sabka Vikas’,” the PM said, going on to list his government’s schemes such as Beti Bachao Beti Padhao, Jan Dhan Yojana, Digital India. He also mentioned how a united nation implemented the Goods and Services Tax (GST).

An India where enormous diversity exists harmoniously will always be a unifying and harmonising force, he said in English.

Modi also highlighted that many people have voluntarily given up their subsidies for the benefit of the nation. The “democracy, demography and dynamism” is making development in the country and changing the destiny of its people, he said.

Modi referred to the contributions of the Indian army to the world, mentioning that in the previous century, India soldiers fought and laid down their lives in the two World Wars, although they weren’t part of any alliance. And today, Indian soldiers are striving to ensure peace by being part of Indian Peacekeeping Force, he added.

He said India has been the first responder whenever and wherever calamity strikes, citing examples of the Nepal earthquake and Yemen evacuation.

“India has never tried to capture land. We have only worked with nations to bring prosperity. We believe in multi-culturism. We have proved that world that people can stay united in plural world,” he asserted.

PM Modi’s tour started on Monday evening when he landed in Switzerland for a packed 24-hour visit. He hosted a roundtable dinner meeting with global CEOs where he narrated India’s growth story and presented investment opportunities.

His meeting with over 40 global industry bosses from 18 countries, including Microsoft’s Satya Nadella, Reliance’s Mukesh Ambani, Airbus CEO Dirk Hoke, lasted for nearly two hours in which he invited everyone to speak and sought suggestions.

As he arrived in Davos, the PM held a bilateral meeting with Swiss President Alain Berset. “Productive discussions on steps to further deepen our bilateral cooperation,” the foreign ministry said in a tweet after the meeting. The two leaders also discussed the progress on automatic exchange of tax information, news agency PTI reported, quoting sources.

India which aims to showcase its potential as a driver of global economic growth also hosted a reception at the Congress Center – the main venue of the World Economic Forum attended by nearly 1,500 delegates.

The Indian presence this year is the largest in the 48-year history of the WEF. Two yoga teachers from India will hold daily classes at the summit, which has attracted 70 heads of state and government, including US President Donald Trump as well as celebrities, chief executives and top bankers.

Bollywood star Shah Rukh Khan, actress Cate Blanchett and music legend Elton John were felicitated on Monday at the 24th Annual Crystal Awards. The awards honour “artists who have shown exemplary commitment to improving the state of the world”.

Ahead of the meet, WEF’s Inclusive Development Index  ranked India 62nd on a list of 103 countries. China ranks 26th while Pakistan is 47th.