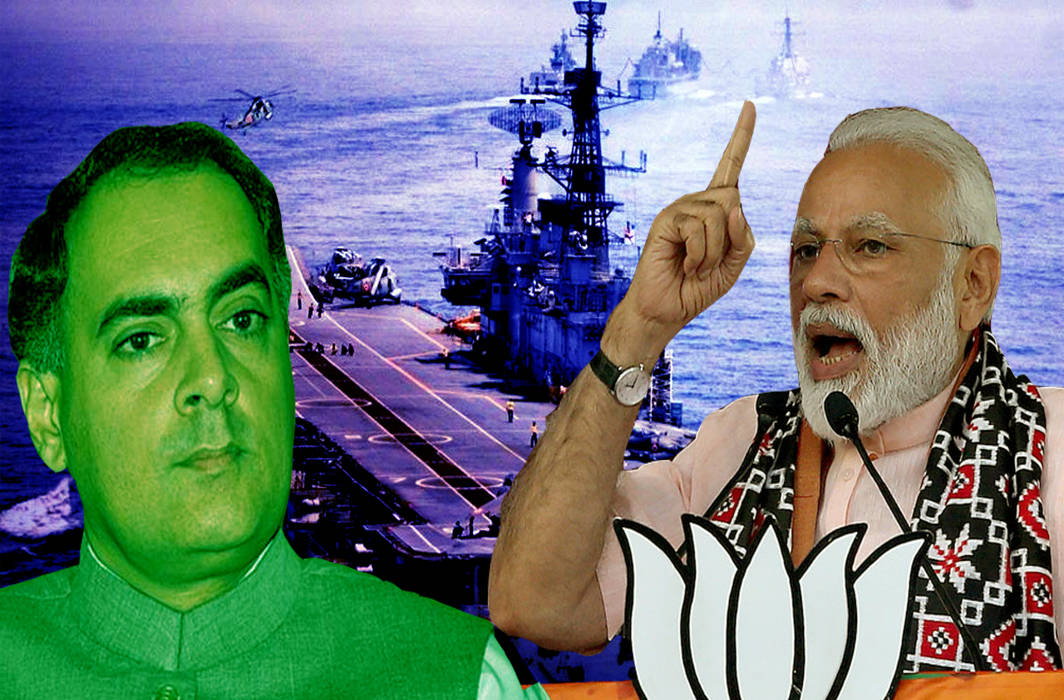 The present goes missing as focus shifts to the past in a way that portends ill for the future: that, in a nutshell, sums up Prime Minister Narendra Modi’s election campaign and what it forebodes.

In a bitterly fought election, PM Modi seemingly left with little to tell the people about his own government, has taken to talking about real or imagined misdeeds of former PM late Rajiv Gandhi, the father of Congress president Rahul Gandhi.

As is his wont, Modi has also melded with this his favourite theme of armed forces, dragging them willy-nilly into politics.

“Ever imagined that a premier warship of the Indian armed forces could be used as a taxi for a personal holiday? One dynasty did it,” Modi claimed. The navy was made to host the Gandhi family and Rajiv Gandhi’s in-laws, and a helicopter was also deployed in their service, Modi claimed, adding that when a family becomes supreme, the country’s security is at stake.

“INS Viraat was insulted by using it as a personal taxi. This happened when Rajiv and his family was out for a 10-day vacation. INS Viraat was deployed for securing our maritime boundary. But it was diverted to take the Gandhi family which was out for a vacation,” Modi had said.

“I would like to state unequivocally, that this was not the case,” Ramdas said in his statement.

The former navy chief quoted parts of written responses from retired Vice Admiral Vinod Pasricha (then captain and commanding officer of INS Viraat) and other officials. He also referred to a note from an officer who was then the naval officer in charge of Lakshadweep islands.

“Prime Minister and Mrs Gandhi were embarked on board INS Viraat off Trivandrum enroute Lakshadweep. The Prime Minister was at Trivandrum as chief guest for the National Games prize distribution. He was going to Lakshadweep on official duty, to Chair a meeting of IDA ( Islands Development Authority) . This meeting is held alternately in Lakshadweep and in Andamans,” he said.

Ramdas stressed that “there were no foreigners” with the former PM when he was on board INS Viraat and pointed out that the “PM is authorised to travel along with his spouse by service aircraft on official duties.”

“Due to such claims, even the truth coming from such people (Modi) would be seen as fake information,” Vice Admiral (Retd) IC Rao said.

Rao, who was the admiral superintendent of the Naval Dockyard in Mumbai in 1987, said, “It is very bad for politicians to make such allegations. I feel that with such continued series of claims, even the true information would be seen as fake.”

“Such statements are aimed at swaying the voters. I feel the voters should ignore such claims and exercise their right,” Rao said.

“Rajiv Gandhi along with his family boarded the ship from Thiruvananthapuram to stay aboard for three days. Lakshadweep island is almost 220 nautical miles from land and helicopter was the only means of transportation then available, so he used the air service from Viraat,” he said.

“He organised a dinner on board the ship for the ship’s crew. It is very bad to spread fake information for some political gain,” he said.

“I am not a fan of Rajiv Gandhi or his policies, I do not want Navy or any other establishment to be used for political gains,” Rao said.

Earlier, Vice Admiral (Retd) Vinod Pasricha had refuted Modi’s claims and said the then PM and his wife Sonia Gandhi were onboard the warship for an official two-day tour.

Pasricha, who was in-charge of INS Viraat during Rajiv Gandhi’s 1984-89 tenure as PM, said all protocols were followed at the time and that no foreigners or other guests were present. “Nobody was on a holiday. Only Rahul Gandhi was with his family. No foreigner was with the PM,” he said.

Two Navy officers who came out in support of Modi’s allegation expressed resentment at the former PM being given the Admiral’s room on the ship, a party being hosted for him and a ‘foreigner’ Sonia Gandhi accompanying him. As such, their ‘support’ to Modi’s claims lacks any sound basis, as is evident from the statements from their seniors.

The two naval officers who came out in support of Modi’s claim did not elaborate whether Sonia’s parents, who were Italian nationals, were present onboard as claimed. They also do not explicitly state whether the trip was an official visit or a holiday.

Congress spokesperson Pawan Kherapointed out said that Pasricha has clarified that Rajiv was on an official visit on INS Viraat and not on a vacation.

“But facts don’t matter to Modi. He doesn’t have anything to talk about his own achievements. Rahul Gandhi has been challenging him for last six months now to debate on Rafale deal, demonetisation, unemployment, but Modi does not have the courage to speak,”Khera said at a press conference.

“Modiji tells us that 30 years ago, Rajiv went for a holiday in INS Viraat. The prime minister is a serial liar. A senior official has exposed his lies today. Retired Vice Admiral Vinod Pasricha appeared on channels some time back and stated that this is a lie and the then PM was on an official visit and not on a holiday,” he said.

Congress leaders, including its president Rahul Gandhi and general secretary Priyanka Gandhi Vadra, have hit out at Modi for his barb at their father, who was India’s prime minister between 1984 and 1989.