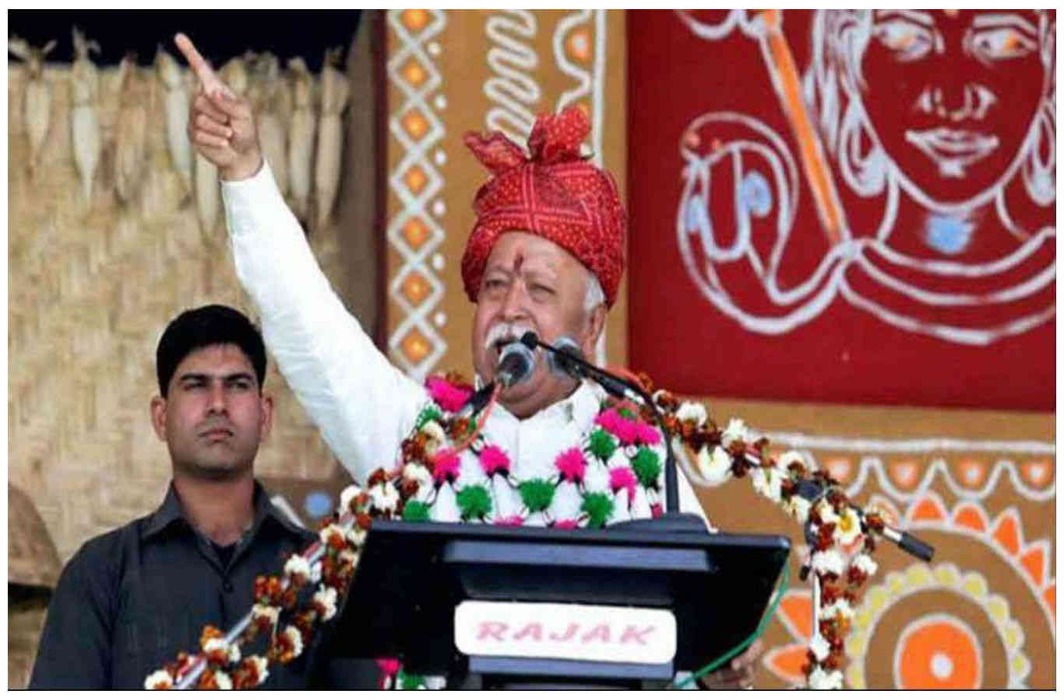 While the verdict on Ram Janmabhoomi case is still awaited, RSS Sarsanghchalak (chief) Mohan Bhagwat today (Thursday, October 18) demanded ‘an appropriate and requisite law’ for construction of Ram temple at the disputed site in Ayodhya.

Using Parliament to make laws to overrule Supreme Court orders on matter pertaining to practices and issues relating to religion has been a convenient recourse political parties have adopted. And the RSS, although still claiming to be a ‘social and cultural organisation’ not concerned with politics – to pay lip service to the undertaking Sardar Vallabhbhai Patel had extracted from it as a condition for lifting the ban he had imposed on the organisation after Mahatma Gandhi’s assassination – is increasingly involved in politics. Only, for electoral politics, it had set up the Jansangh – BJP’s earlier incarnation – a year after Sardar Patel’s death.

Bhagwat’s annual Vijayadashami speech in Nagupr was replete with statements on burning political issues of the day. It needs to be kept in mind that what the RSS supremo says sends out a message about the line to be followed and enforced by its cadres and followers of the scores of outfits affiliated to it, including the BJP.

The Sarsanghchalak said, “The government should clear the path for construction of the Ram temple in Ayodhya through an appropriate and requisite law. The temple construction was necessary from the ‘self-esteem point of view’ and it will also pave way for an atmosphere of goodwill and oneness.”

There is an obvious game plan of a few elements to stall the judgement by presenting various newer interventions in the judicial process, he said, adding that it is nobody’s interest to test the patience of society without any reason.

Bhagwat further said, “The place of janmabhoomi is yet to be allocated for the construction of the temple although all kinds of evidence have affirmed that there was a temple at that place. There is an obvious game plan of a few elements to stall the judgement by presenting various newer interventions in the judicial process, he said, adding that it is nobody’s interest to test the patience of society without any reason.”

On Sabarimala, Bhagwat said that the September 28 verdict by a five-judge Constitution bench of the Supreme Court, allowing women of all ages to enter Kerala’s Sabarimala Temple, did not account for the nature and premise of the tradition that has been accepted by society and has given rise to divisiveness in society.

He said questions such as why only the Hindu society experiences such repeated and brazen onslaughts on its symbols of faith, obviously arise in the public’s mind and lead to unrest.

“This situation is not at all conducive for the peace and healthiness of the society,” the RSS chief said.

Decisions taken without considering all aspects and patiently creating mindset of the society will neither be adopted in actual practice nor will they help in creating a new social order, in tune with changing times and positions, he said.

“The situation arising out of the recent verdict on Sabarimala temple shows the predicament. The nature and premise of the tradition that has been accepted by society and followed for years was not taken into consideration,” Bhagwat said in his annual Vijayadashami speech in Nagpur,

“The legal verdict has given rise to unrest, turmoil and divisiveness in the society in place of peace, stability and equality,” he said asking why only Hindu society experiences such repeated and brazen onslaughts on its symbols of faith.

Bhagwat said that the version of heads of religious denominations and faith of crores of devotees were not taken into account.

The petitioners were not devotees and a large section of women that follows this tradition, was not heard too, he added.

The verdict has given rise to unrest, turmoil and divisiveness in the society in place of peace, stability and equality, the RSS chief said.

Bhagwat said, “Nowhere in the world, healthy and peaceful social life has ever thrived and can thrive merely based on laws and fear of punishment.”

Speaking on Maoism, he said it has always been “urban” and the neo-Left doctrine of urban Naxals is to establish an “anti-national” leadership with blind followers solely committed to them.

He charged that “urban Maoism” was propagating falsehood and spreading hatred in the society, using neglected sections of society to further its agenda.

“These people take strength from the country’s enemies and always malign the nation wherever they go,” he said.

Their cohorts already established in social media, intellectual circles and other institutions are associated with such activities, he added.

Through the manufacturing of a vicious atmosphere that weakens the social cohesion — essentially the bedrock of internal security of a nation a world of psychological warfare is being carved out, he charged.

“This is called as ‘Mantrayuddh’ in our traditional ‘rajneeti shastras’,” he said. The government and the administration need to address this, he said.

A number of well-known activists in the country were arrested in the recent past for their alleged links with Naxals.

Bhagwat, said India needs to emerge as a “strong nation” with a muscular security and foreign policy that will deter other countries from meddling with it.

He said while India has always followed a policy of maintaining peace; there are several countries that have taken hostile positions against the country.

“We cannot be negligent towards security… while there is no need to worry, but it is important to remain alert. We always wants peace and think of the world as family; no matter which party has been in government, this has been our policy, but it has been our experience that despite us being good and well meaning, there are many in the world who are hostile to us, we need to find ways to save ourselves from them,” he said.

Making a pointed reference to Pakistan, he said though a new government is in place in the neighbouring country, there has been no change or let up in the ceasefire violations along the borders. “We have to save ourselves, we need to become so strong that those who plan an attack will not dare to do so. When war become inevitable, people die on both sides,” he said.

Bhagwat also spoke about defence purchases and production – significant in the context of the attacks on BJP-led government over the Rafale fighter jet deal with France.

“The country cannot be assured about its security without becoming self-reliant in defence production,” Bhagwat said.

The RSS chief said while it is imperative to purchase equipment for the armed forces from countries abroad, because we lack the technology; it is equally important to ensure that the terms of the trade are not skewed.

He said, India should not give into to any kind of arm-twisting when it comes to trade negotiations or compelled to give up its rights to self sufficiency.

He said that to sell its products in the international market, sometimes a country needs to purchase something from a foreign nation. Thus, buying defence equipment may be a part of trade strategy, or at times required also, the RSS chief said.

“This process of give-and-take in trade should not be stopped. It should be on our terms and we should not be dependent on anyone else for our security. We should get technology and enhance our domestic capacity,” he added.

Bhagwat said the country is not careless about its security but there is a need to be more active and vigilant. He asserted the country should become so powerful that no one dares to attack it.

“India has always displayed its clear intent to maintain peaceful and cordial relations with all countries, in words and deeds — standing and acting firm and making prudent use of our capabilities while initiating bold actions wherever necessary in context of national security,” Bhagwat said.

Underscoring the importance of keeping the morale of armed forces high, he said it was essential to be more attentive towards their and their families’ needs.

“Efforts are being initiated and accelerated to enhance the morale of our armed and security forces, making them well-equipped and to provide them with latest technologies. This is one of the reasons that the prestige of Bharat is rising in the world,” he said.

“There have been some laudable efforts in this regard by the government.”