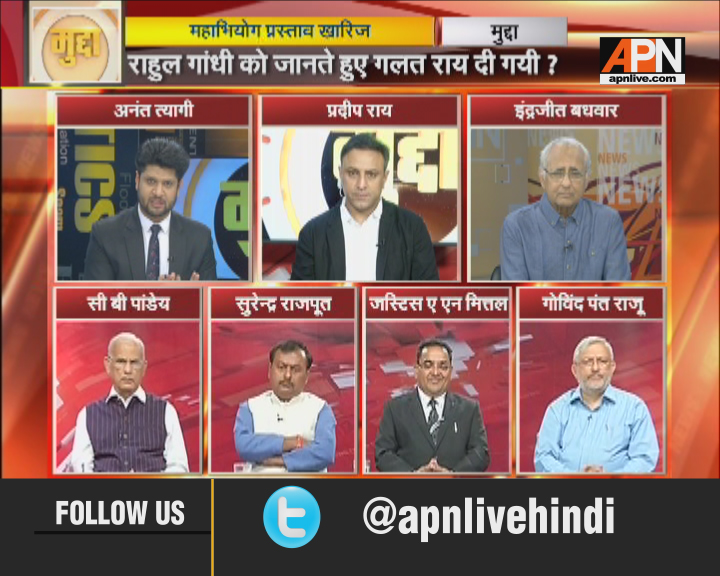 Rajput said: “The Congress will take stock of the situation at the highest level. Legal opinion has not been taken, and the vice-president has said that there is no merit in the case (regarding the impeachment motion against CJI Dipak Misra).”

Justice Mittal said: “Kapil Sibal is extremely knowledgeable, and knows pretty well how he has been advising the Congress. Cogent evidence is needed to prove the allegations.”

Raju said: “Congress has raised questions on virtually every constitutional and political matter in the country. Congress first raised allegations against the CJI and now the target is the vice-president. Vice-president is not the BJP rubber stamp. These happenings show that the Congress can do anything to get back into power, in fact, so can the BJP.”

Badhwar said: “Here an attempt is seen to politicize the judiciary, but politicians will try to do that all the time. What needs to be seen is what exactly is the case. Naidu is a tall political leader, but also very close to the BJP. As journalists we feel that there was no other verdict to be delivered in this case. I personally don’t feel that Misra is guilty of the allegations made so far. The matter is thoroughly politicized.”

Rai said: “If you read Naidu’s paper, it doesn’t look like there is any political colour to it. The points raised in the impeachment motion have been clarified in Naidu’s paper. Master of the roster issue, like in Kamini Jaiswal matter, is the court’s internal matter. Let us do nothing to weaken the judiciary. The charge leveled should be beyond reasonable doubt. In every social institution, there will be people with malafide intentions, but the charges need to be proved.”

Pandey said: “Everybody knows that the grounds for impeachment were flimsy. The proposal should never have been moved.”

Rai said: “Sibal had drafted the charge. How come Sibal as minister was silent on the charges leveled earlier? Why was a defective petition filed? The allegations should be properly documented. The roster issue, raised in the motion, is already pending in the court. “

Anant asked Rajput if there were so many loopholes, why was the motion tabled?

Rajput said: “BJP is flexing its muscle. Of course, Congress needs to be in power because it is a political party and needs to serve the people. If Vice President has bypassed certain procedures, we will certainly raise the issue. If over 50 people have signed, then a committee needs to examine it. That the Congress wants to weaken constitutional machinery is a very serious allegation.”

Raju said: “Congress is getting desperate now. How come Vice President is there only to verify the signatures? A three-member committee is formed only if the vice-president feels that there is reason to do that. Emergency was imposed by the Congress, and now it is championing causes that it feels are threatening the constitutional fabric of the country.”

Upadhyay said: “It is like ulta chor kotwal ko daante (the thief is running after the cop). “

Rai said: “There are good and bad people in all parties. It is not good to go ahead on flimsy allegations.”

Rajput said: “Congress has tabled the notice. Now we will have to see what are the legal options before us. Right now I can’t spell out all the ifs and buts.”

Justice Mittal said: “The Vice-President is neither rubber stamp nor post office. He has used his mind and knowledge to give his opinion. “

To round up, Badhwar said: “Politicians and judiciary will do their work. As journalists it is our duty to write the truth, as the facts are presented to us. The so-called ‘judges’ mutiny’ that happened a few months ago was no reason to impeach the CJI. A feeling is there that there is effort to control the judiciary. Judiciary has become a political football, and the press conference against the CJI was an example of that.”