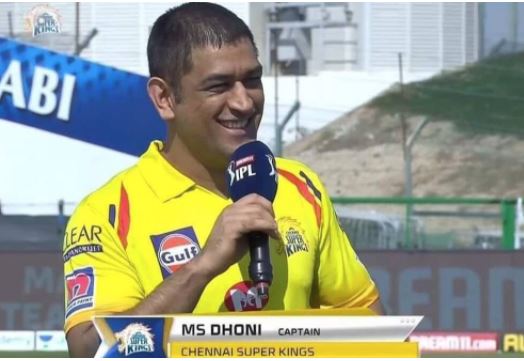 Chennai Super Kings captain Mahendra Singh Dhoni confirmed on Sunday that he will be back with the Yellow brigade in next season of the Indian Premier League. The announcement came during a toss of their last match against Kings XI Punjab.

At the time of toss, commentator Denny Morrison asked Dhoni, is this the last game in Yellow jersey, he quickly replied definitely not. As expected, his response has sent social media into frenzy. Later, the chief executive of CSK Kasi Viswanathan had also confirmed that Dhoni would play for CSK in the next season of IPL. Commenting on the rumours of changing captain, he confirmed that Dhoni will lead CSK in IPL 2021.

Mahendra Singh Dhoni has been a part of the Chennai-based franchise since 2008, except the two seasons with Rising Pune Supergiant. CSK has won three IPL titles. This is the first time when the team has not qualified for the playoffs. In this season of IPL, Dhoni-led Chennai Super Kings became the first team to be eliminated from IPL 2020. For the fist in the history of IPL, Chennai will not play in playoffs.

However, the 39-year-old former skipper MS Dhoni had announced the retirement on August 15 after the T20 World Cup team announcement, to be held in Australia in October-November, was postponed due to the COVID-19 pandemic.  Dhoni had last played in blue jersey against against New Zealand in 2019 World Cup semifinal.

In the past one year, the selectors of Indian cricket team had tried several players to replace Dhoni with Wriddhiman Saha, Rishabh Pant, KL Rahul and Sanju Samson. The team management is still looking to find a player who can replace Dhoni in the team.