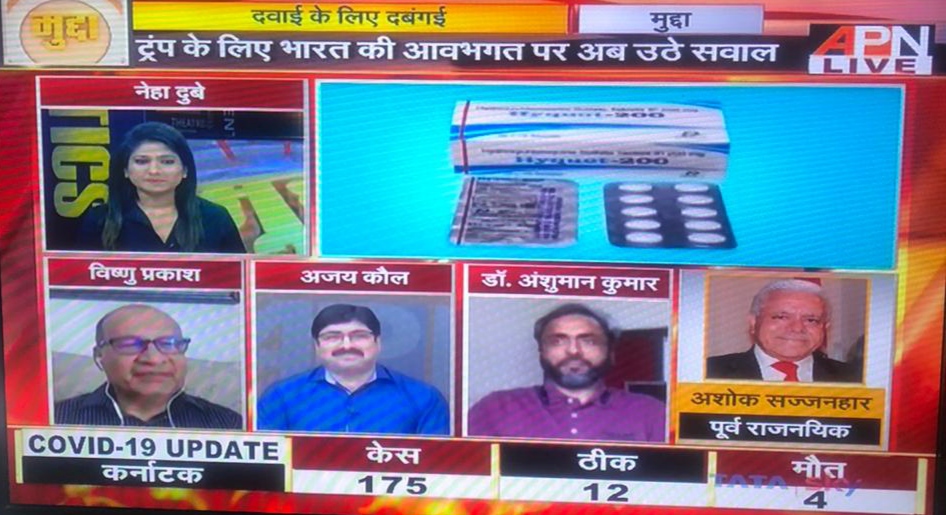 Over 4,000 Covid-19 cases have been reported in the country and nearly 400 in the past 24 hours. The biggest issue is of treatment. US President Donald Trump has asked India to supply Hydroxychloroquine, an old and inexpensive drug used to treat malaria, and threatened retaliation if the export is disallowed. APN’s popular debate Mudda discussed the latest developments. Anchorperson Neha Dubey posed the questions to the panelists, including medical expert Dr Anshuman Kumar, APN Editor Ajay Kaul, and former envoys Ashok Sajjanhar and Vishnu Prakash.

Sajjanhar said: “India’s relations with the USA are very good, and have been on the upswing in the last few years. The entire world is grappling with the Corona crisis. There are business contracts between the US and India, and the contracts may include retaliatory clauses. Let’s not make too much of the quote. It is true that Trump should not have made such a remark, but that’s typical of him. He often says things he does not mean to. Please note that he also said if India does not send Hydroxychloroquine, it’s okay…and after that he added the retaliatory remark. India will first see its home requirement and then send drugs to foreign nations based on who needs most.”

Kaul said: “Just a month ago Trump had openly said Modi is a friend, and then he used such harsh words?”

Sajjanhar said: “See, Trump is not a diplomat. He has a business background. His quotes must be seen in that context.”

Kaul said: “Trump has also commented that India has been taking advantage of the US. The tone and tenor are like that used for Iran, US’s enemy.”

Sajjanhar said: “I know the remark was uncalled for. Trump is not like Obama. Diplomatic grace is missing in his persona. There are so many examples wherein he has embarrassed his close allies.”

Kaul said: “Earlier Trump commented on India’s Russian missile systems deal. How much can we trust such a person?”
Sajjanhar said: “Trust is important in diplomatic relations. Whenever it suits India’s national interests, we have been firm. Our ties with the US are very important and the US is one of the biggest trading partners. Both nations must be careful so as not to upset the relations.”

Kaul said: “Modi went out of the way to welcome Trump recently, there should have been a distinction. In the ‘Howdy Modi’ event, Modi said he wanted Trump to win.”

Sajjanhar said: “Trump came as President of the US. So, we welcomed him officially. In the ‘Howdy Modi’ event, it was a great honour to the Indian PM, it showed how important the Indian diaspora is in the US.”

Prakash said: “Trump’s style is unique. We should not be reading too much into his statement, he’s like this with every nation. US elections are around the corner, and he must want to show that he’s a tough talker. We should not examine such comments in detail. He talks like this even with friends. See our relations with the US are on the upswing. It’s true such statements are against diplomatic protocol. There’s nothing that can be done with his inherent style.”

Dr Kumar said: “The drug Hydroxychloroquine helps in controlling the symptoms till a certain degree. So far this is the research on it. It’s not even established how effective Hydroxychloroquine is in treating the virus, and a battle has already started over it. See public support has helped the lockdown efforts to control the crisis. US failed in doing that. To take pressure off his back, Trump may have used harsh words.”

Neha then stated that 30 other nations are also asking for Hydroxychloroquine. Dr Kumar said: “It helps in controlling the load. It seems that Trump is not as bothered about real action, he is focussing on his image as a hard talker.”

Prakash said: “Let’s not be quick to comment that Trump is getting desperate. We need to focus on our challenge. Trump’s popularity is on the rise. 45 percent Americans are already supporting him, as part of a survey. As far as Hydroxychloroquine is concerned, I am not the expert on it, but this is not the time to split hairs over the issue.”

Kaul said: “I would like to ask Mr Prakash if Trump, by making the retaliatory remark, was trying to force a submission.”

Prakash said: “Trump’s way of conducting diplomacy is unique. He will behave the way he wants to; he wants to be seen as strong. It will show our maturity not to take offence of such remarks. We should have confidence on our own selves.”