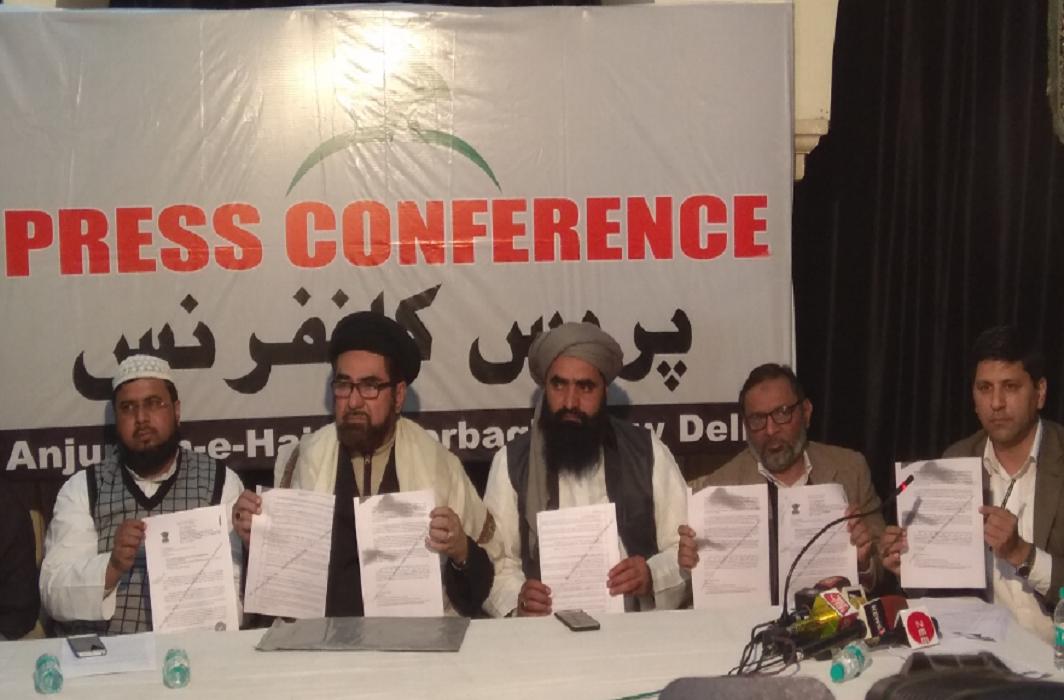 Muslim leaders representing major sections have demanded immediate action against Waseem Rizvi, Chairman of Central Shia Waqf Board of Uttar Pradessh for spoiling communal harmony and duping more than worth rupees 100,000 crores  waqf properties under the patronage of former minister Azam Khan, during Samajwadi Party regime in the state.

They strongly condemned Rizvi for his recent statement alleging more than 125,000 Madarsas in the country were engaged in imparting terror training to their students. The leaders demanded his immediate arrest to maintain communal harmony in the country.

Maulana Kalbe Jawad said that after failing in offering disputed Babri Masjid site for construction of Ram temple, Waseem Rizvi has now been spreading hate among major communities by his irresponsible and provocative statements about Madarsas.

“His irresponsible remarks on Madarsas are a part of larger conspiracy to create differences between Hindus and Muslims, Shia and Sunni communities. We are filing an FIR against him,” said the Shia leader. There are more than 15 FIRs against Rizvi and no action is being taken by the government agencies, he alleged.

He further said that it is against government’s official position. Group of Ministers and especially Home Minister Rajnath Singh have already given clean chit to Madarsas saying that Indian Muslims cannot be influenced by Daesh (IS) propaganda. “They share Indian values of communal harmony and national integration,” he said.

In his letter Ejaz Abbas recalled UP Chief Minister’s order for CBI enquiry against Waseem Rizvi in more than eleven serious criminal cases in accordance with recommendation of the national waqf body.  He said that due to corruption in not collecting market rate rents of the properties is incurring loss of 20 lankh rupees every hour.

Centrtal Waqf Council member had also alleged that due to Waseem Rizvi and Azam Khan connivance in  waqf properties “ill allotting to various trusts and builders” had duped the waqf boards  to the tune of 100,000 crores with serious violations of Waqf Act and Waqf Rent Rules 2014.

The community leaders have alleged that Waseem Rizvi is bent upon creating animosity and hate among Hindus and Muslims and also within two major sections within Muslims: Sunnis and Shia communities. Some of them were of the view that Waseem Rizvi is working on RSS agenda and even may be that of Pakistan for spoiling communal harmony in the country.

The Muslim leaders recalled that Subramaniam Swami, a BJP leader had publicly acknowledgement during a TV show about the conspiracy of polarizing Hindus and creating serious divisions among different Muslim sections.

Maulana Arif Qasmi, president of All India Imam Foundation, said that all Muslims were aware that Waseem Rizvi is part of the larger conspiracy against the nation. He acknowledged that Rizvi, who is appointed chairman of Shia Waqf  Board by the state government, has partly succeeded in his campaign. However, Maulana Kalbe Jawad and several other Shia leaders have taken right stand in clarifying the situation, he said.

Mufti Aijaz Arshad Qasmi, President of Peace Foundation of India, alleged that Waseem Rizvi is part of the present government’s priority of creating discord among different religious groups and Muslim sects. He also alleged that Rizvi might be working on the behest of Pakistan intelligence agencies, as well.

Mufti Qasmi further said that funds allocated for Madarsa Modernization in the Ministry of Human Resource Development (HRD) were not being utilized at all. If Waseem Rizvi is to be believed, than several lakhs Madarsa students were imparted terrorism training. In that case, Government should immediately conduct investigation into the allegations against Madarsas or arrest Rizvi for creating terror  in the society under terror laws including Unlawful Activities Prevention Act (UAPA).

Maulana Kalbe Jawad asserted that if government does not take action against Waseem Rizvi then it would be confirmed that he is being encouraged and supported to create hatred and spoil communal harmony in the country by people sitting in the government.

After the press conference, Maulana Kalbe Jawad and prominent Sunni clerics went to Lodi colony police station in the capital for filing FIR against Waseem Rizvi. He asked the law enforcement agency to “take immediate legal action and conduct a thorough investigation” to unearth anti-national and terrorist conspiracy.

Waseem Rizvi, had recently written a letter to PM Narendra Modi and UP CM Yogi Adityanath recommending ban on Madarsas saying they were being used to aid terror activities and advised that religious institutions ve truned into schools imparting modern education.

He was quoted saying, “I have written to the Prime Minister and Chief Ministers, Chief Secretaries of all states and Union territories. The Maharashtra government has already ordered a high-level probe after receiving my letter.’’ Earlier Rizvi was in news for asking Muslims to withdraw their claim on the disputed site at Ayodhya and favoured construction of a Ram temple.