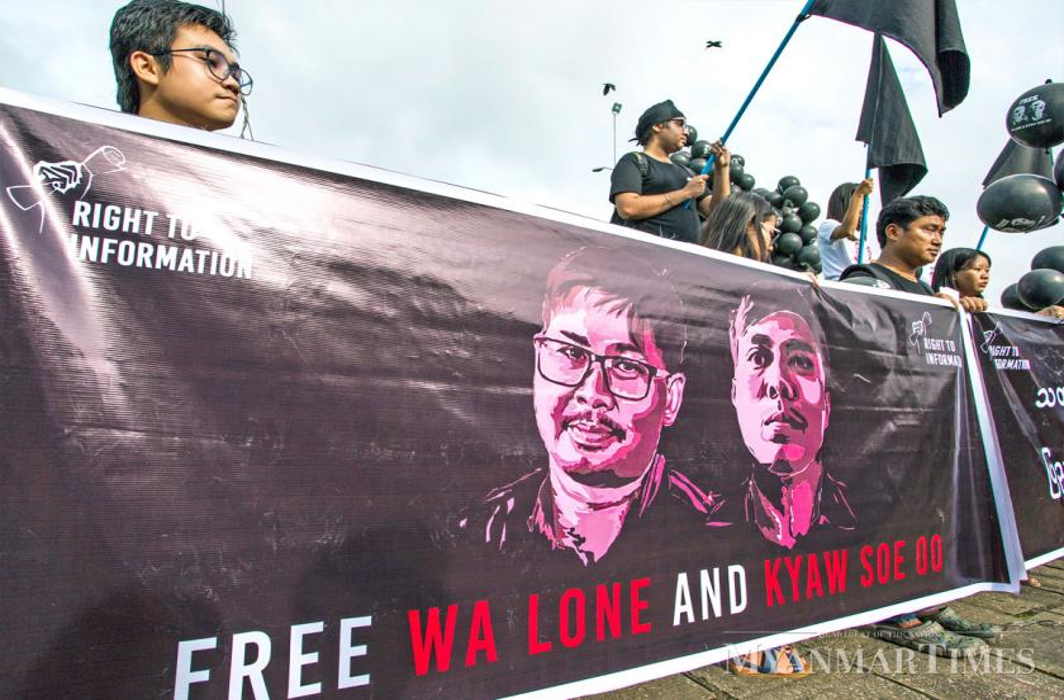 Myanmar’s court has sentenced two Reuters journalists to seven years in jail after finding them guilty of violating official secrets act. They were involved in investigating into the killings of a number of Rohingya Muslims in Rakhine province.

The two journalists: Wa Lone, 32, and Kyaw Soe Oo, 28, were detained in December 2017 who were working to investigate the violence against the minority community.

UN described the large scale of violence as a form of “ethnic cleansing,” with military operations forcing more than 7 lakh Rohingya Muslims to flee the country to Bangladesh.

In July, the journalists were charged with breaching the colonial-era official secret act, which carries a maximum penalty of 14 years in prison. The two men pleaded not guilty.

Following sentencing at the Yangon court Kyaw maintained the pair’s innocence, but added that they were not surprised by the verdict. “We didn’t do anything wrong. We’re not exactly shocked by the verdict.”

The lawyer of the journalists Zaw Maung  reacted saying, “This is disappointing (and a blow) to democracy, rule of law and press freedom.”

The allegations were denied by the detained journalists. They testified in court that two police officers had given them papers relating to their investigation during a meeting in a Yangon restaurant which was followed by their arrests by plainclothes officers.

This was confirmed by a police officer, Moe Yan Naing, who testified  that he had witnessed a plot by senior police to frame the two journalists by planting secret documents on them.

The detention of the two journalists has led to criticism of Myanmar’s de facto leader, Aung San Suu Kyi, who has also faced a loss in worldwide support for her handling of the Rohingya issue.

Meanwhile, Kunt Ostby, the UN Resident and Humanitarian Coordinator in the country has condemned the ruling.  He said, “The United Nations has consistently called for the release of the Reuters journalists and urged the authorities to respect their right to pursue freedom of expression and information. Wa Lone and Kyaw Soe Oo should be allowed to return to their families and continue their work as journalists.”

Reuters Editor-in-Chief Stephen Adler , while reacting to the Mayanmar court’s order said that the conviction was “a sad day” for the organization, the two men and “the press everywhere,” adding that the verdict “must be corrected by the Myanmar government as a matter of urgency.”

The prosecution of Rohingya Muslims occurred in late 2016 when Myanmar’s armed forces and police started a major crackdown against them in response to the alleged attacks on Burmese border posts in October 2016 by unidentified insurgents.

The Burmese military have been accused of ethnic cleansing and genocide by various United Nations agencies, International Criminal Court officials, human rights groups, journalists, and governments including the United States. The UN has found evidence of wide-scale human rights violations, including extrajudicial killings, gang rapes, arson and infanticides, which the Burmese government dismisses as “exaggerations”.

The two journalists associated with Reuters were covering the unfolding developments in Rakhine province which was obviously not liked by the government. The police planted certain papers during a meeting with the duo in a restaurant. The journalists were immediately arrested by the other plain clothes officers.

Reuters news agency, having its headquarters in London, was established in 1851 by Paul Reuter, who worked at a book publishing firm in Berlin and was involved in distributing radical pamphlets at the beginning of Revolutions in 1848, which was known in some countries as the Spring of Nations, People’s spring or he Springtime of the Peoples.

The Myanmar Times reported on Saturday about dozens of protesters hitting the Yangon streets who were demanding the release of journalists ahead of Monday’s verdict on charges.