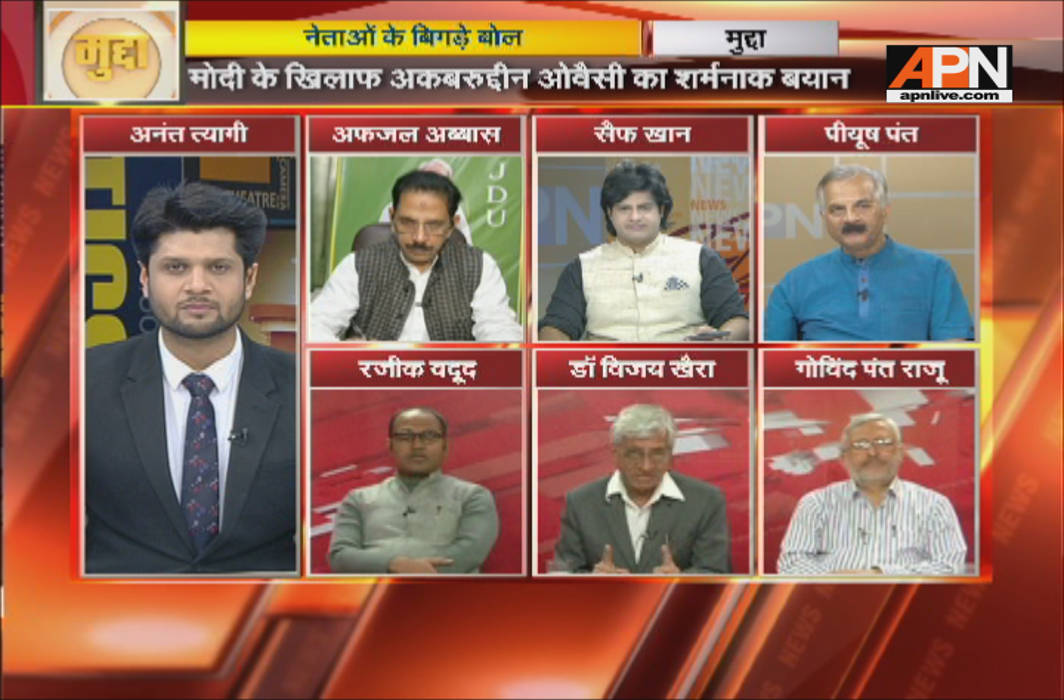 Panellists feel that mudslinging exposes the desperation of political parties, who are out to garner votes

As polls come closer, allegations and counter-allegations are flying around, with many leaders making below the belt remarks. Hours after Uttar Pradesh Chief Minister Yogi Adityanath said he would have to “run away” if the BJP came to power in Telangana, Hyderabad lawmaker Asaduddin Owaisi delivered his retort. “India is my father’s country. Nobody can force me to leave it.” Owaisi took a potshot at Prime Minister Narendra Modi, too, by calling him a ‘chaiwala’. Religion, caste, gotra and name calling, all have brought public debate to a new low.

Khera said: “Before arriving at any conclusion, look closely at what Yogi said. He had said ‘he will have to leave Hyderabad’. He meant miscreants will flee.”

Pant said: “I deprecate the language used in recent times. Yogi often targets Muslims. Owaisi is a leader of a party and he should be respected for that. In Telangana, BJP does not have a hold, and it is getting desperate.”

Vadud said: “The common man is feeling insecure. These leaders are misusing freedom of speech. In Telangana, on one side is TRS, on the other side is Congress with allies, BJP is next, followed by Owaisi. The poll battle over there is going to be bitterly fought. BJP wants to increase its tally there. So it suits BJP to talk like this.”

Khan said: “Subramanian Swamy has admitted that their strategies are aimed to gather votes only.”

Abbas said: “I condemn both Yogi and Oawaisi. All leaders should watch out what they say. No one should be making personal attacks.”

Raju said: “Election Commission should clearly lay out guidelines, and people making such remarks should be stopped from fighting elections. It is like a vote market, and people are doing anything to grab votes. Owaisi said that parties will be wooing them; Yogi said people (like him) will have to flee Hyderabad. Yogi should know history better, Nizams never fled Hyderabad. What was he referring to?”

Khera said: “the trend of making lowly remarks, like calling PM a ‘thief’, was started by the Congress. Congress has steered the debate to a low level. It is the Congress that is getting so desperate, Never before has anyone from the Congress gone to a mandir or worn the sacred thread.”

Anant said: “No one will take permission from BJP to go to mandir.”

Khera said: “It is all hogwash, meant only to pick up votes.”

Khan said: “Amit Shah at a rally said Congress is a party that saves animals only. Since 2014, look at the number of communal incidents in the country.”

Raju said: “This is just caste politics. BJP says Congress only looks out for Muslims. The reality is that Congress has used the Muslims. Today, Muslims don’t feel isolated, which is good. But both Congress and BJP are looking at votes only.”

Pant said: “There is a certain narrative being made out that under the rule of one party, a section of people will feel threatened. Common man is simply a citizen, irrespective of caste and religion.”

Abbas said: “Then Prime Minister Manmohan Singh had spoken about looking at minorities’ interests, but Muslims are still waiting for the redress of their grievances.”