Home Latest Politics News Narendra Modi sweeps back to power, Opposition fails to put up a... 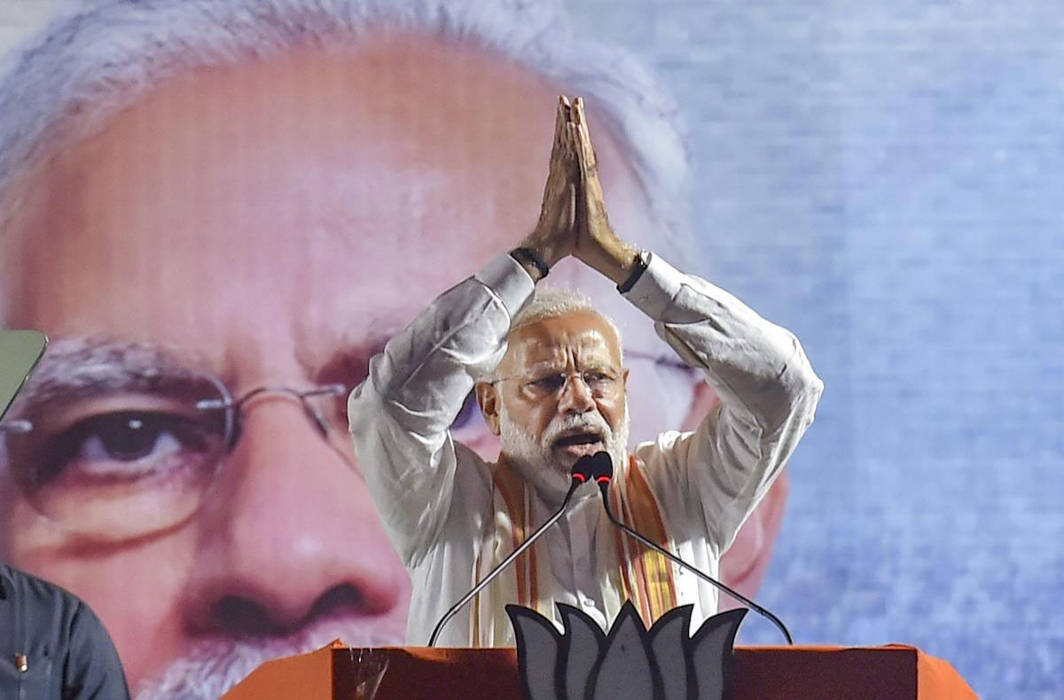 In a remarkable poll verdict with far reaching implications for India, Prime Minister Narendra Modi was voted back to power with a bigger majority that put paid to Opposition’s efforts and hopes of posing a challenge even jointly.

Prime Minister Narendra Modi today (Thursday, May 23) attributed the victory to the country. Modi, who is set to enjoy his second straight term as the Prime Minister, said India has won again.

“With all+ development for all+ everybody’s confidence = victorious India,” Modi tweeted. “Together we grow. Together we prosper. Together we will build a strong and inclusive India. India wins yet again,” he said.

If the trends stay until final results, the BJP will surpass its 2014 tally when it had won 282 seats on its own in the 543-member Lok Sabha. Adding the seats won by its allies, the BJP-led National Democratic Alliance could win 343 seats, up from 336 in 2014.

Senior BJP ministers and alliance partners credited PM Narendra Modi and BJP president Amit Shah for the victory described by many as a “tsunami”. Amit Shah hailed the party’s superb showing in the Lok Sabha polls as “victory of India” and said it is people’s mandate against the Opposition’s propaganda and personal attacks as well as their total rejection of politics of dynasty, appeasement, and casteism.

In a series of tweets, Shah said this victory is a “win of people’s confidence in Prime Minister Narendra Modi”.

Senior ministers Rajnath Singh, Sushma Swaraj, Suresh Prabhu, and Ramvilas Paswan were among those who credited Modi for the stupendous electoral triumph.

Meanwhile, Opposition leaders too congratulated the BJP on its victory. West Bengal Chief Minister Mamata Banerjee congratulated the winners, adding that “all losers are not losers.” Taking to Twitter, Mamata sought for a complete review of the results before sharing her views on the trends.

Former J&K chief minister Mehbooba Mufti conceded defeat from the Anantnag constituency and said it was time for the Congress “to get an Amit Shah” “Congratulations to Narendra Modi ji for a historic mandate. Today surely belongs to BJP and it’s allies. Time for Congress to get an Amit Shah,” she tweeted.

In a major upset, Congress president Rahul Gandhi had to eat a humble pie in Amethi at the hands of BJP’s Smriti Irani.

The loud and clear message was the electorate putting a stamp of approval on hardline Hindutva, seen in victory of BJP candidates like terror-accused Pragya Thakur over former chief minister Digvijay Singh who spared no effort to present himself as genuine Hindu.

Others of her ilk like Sakshi Maharaj, Niranjan Jyoti were also on way to victory, as was Giriraj Singh from Begusarai.

Favourites of the much-reviled lot of liberals – ‘libtards’ – under this dispensation were crushed. Kanhaiya Kumar lost to one of the outspoken Hindutva proponents in Modi’s council of ministers, Giriraj Singh, whose penchant for denouncing every dissenter with ‘send him to Pakistan’ earned him the sobriquet of ‘Visa mantri’. Atishi Marlena of Aam Aadmi Party (AAP) lost to BJP’s Gautam Gambhir in East Delhi.

There has been a surge in the BJP’s voteshare almost everywhere across the country.

Among the major states where it has a presence, the BJP has got more votes than in 2014 in Gujarat, Haryana, Jharkhand, Himachal Pradesh, Karnataka, Madhya Pradesh, Delhi, Odisha, Rajasthan, Uttar Pradesh, Uttarakhand, and West Bengal.

In large parts of the country, the BJP’s opponents can no longer claim the BJP does not have the support of the majority — in several big states, the party has received more than 50% of the vote.

For Congress, it was another dismal performance after the phenomenal debacle of 2014. From 44 in 2014, it failed to make much headway and seemed likely to be confined to just 50 seats.

It was leading in only one seat in Madhya Pradesh and drawing a zero in Rajasthan, where the party won Assembly elections just four months ago. In Chhattisgarh, the Congress is leading only in Bastar and Mahasamund. The party had swept the polls in this state in November-December.

The only good news for the Congress is in Punjab and Kerala. In Kerala, the Congress-led UDF appears to be sweeping the poll, leading in 19 out of 20 seats. This appears to be in line with party leaders’ assessment that the party could do well due to the presence of Rahul Gandhi as a candidate in Wayanad.

Also Read: Narendra Modi headed for a sweep back to power with greater strength

The Left is shrinking further, with its tally going down to perhaps five at the national level. In Kerala, where the CPI-M-led LDF is in power, all its candidates except in Kasargode are trailing.

The most disappointing for the anti-BJP camp has so far been the performance of the gathbandhan in Uttar Pradesh where the SP-BSP-RLD alliance was expected to give a fight to the BJP which won 71 of the 80 seats in 2014. The BJP seemed set to win 60 seats.

The NDA is sweeping Bihar as well, winning 38 out of the state’s 40 seats. This is a crushing blow from Lalu Prasad’s RJD, and its young leader Tejashwi Yadav.

However, the regional parties in the southern states appeared to have contained the BJP’s race and disappointed the party leadership in its ambition to grow as a formidable force in those states except in Karnataka. DMK, which is in alliance with the Congress in Tamil Nadu is sweeping the poll, according to the trends, the YSRCP is sweeping in Andhra Pradesh and TRS is continuing its dominance in Telangana.