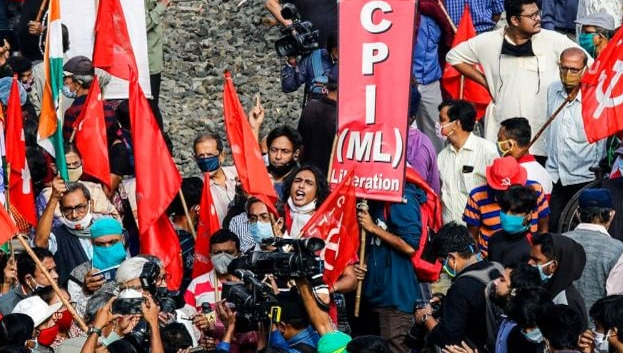 The 24-hour nationwide strike called by various trade unions against the Centre’s farm bills crippled normal life in Kerala on Thursday and it partially affected West Bengal, Tripura, Tamil Nadu and Odisha. Other than the BJP-supported Bharatiya Mazdoor Sangh (BMS) all trade unions are supporting the strike. Clashes between Left activists and police were reported in several parts of West Bengal, other states saw road blockades that led to disruption in traffic movement.

The government offices, businesses and banks remained shut in Kerala. Private buses, rickshaws and taxis were out of services leading to deserted roads. Many industry and trade bodies like the Confederation of Indian Industry Kerala chapter and tour organisations had requested the trade unions to avoid forced shutdown but it fell on deaf ears.

In West Bengal, activists of CPI(M) affiliated outfits like CITU and DYFI in Jadavpur, Garia, Kamalgazi, Lake Town and Dumdum areas of Kolkata forced shopkeepers to shut their shops. Taxi drivers at Howrah railway station were also asked to stop services. Clashes erupted between police and protesters in North 24 Parganas district that led to burning tyres and breaking the windscreen of buses in Coochbehar and Jhargram districts.

In Tripura, most markets were closed and the movement of vehicles was halted. Even though government offices and banks were open, the President of Tripura unit of CITU, Manik Dey, alleged that BJP supporters vandalize the party office in Agartala.