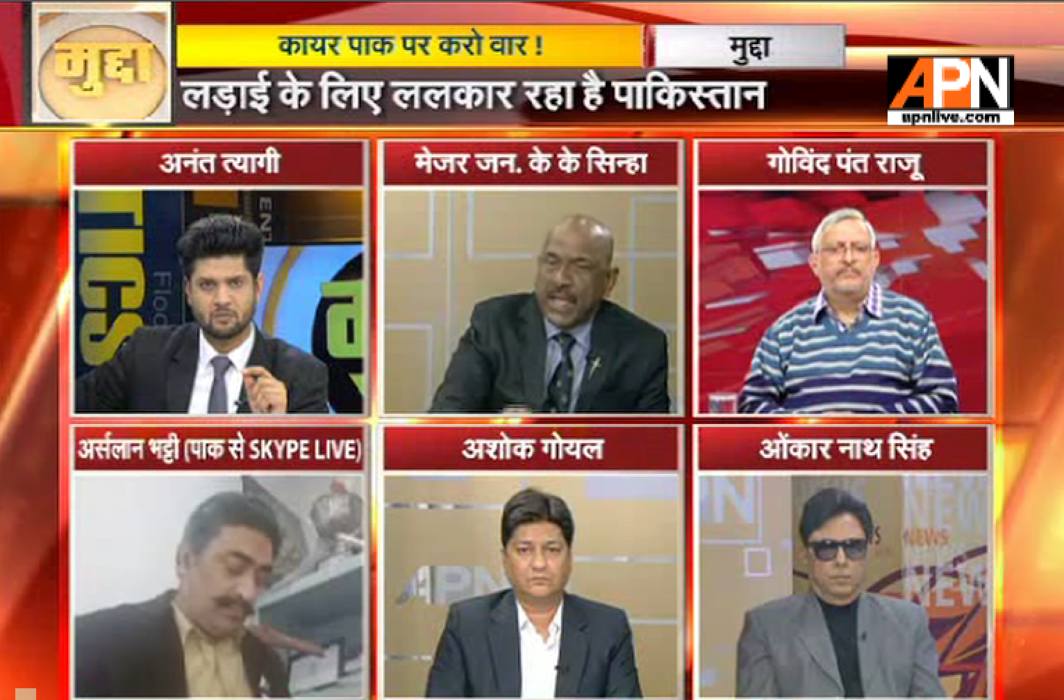 Tensions flared up between India and Pakistan as an Army Captain and three jawans were killed in a ceasefire violation by Pakistani troops along the Line of Control (LoC) in Bhimber Gali sector of Rajouri district. Schools have been shut down in Rajouri. In the last 35 days, nearly 12 people have been killed on the Indian side. APN’s popular debate Mudda took up the issue. Anchorperson Anant Tyagi posed questions to panellists including bureau chief of Duniya News of Pakistan, Arslan Bhatti, BJP’s Ashok Goyal, Congress’s Omkar Nath Singh, defence expert Maj Gen KK Sinha (retired), and APN consultant, Govind Pant Raju.

Maj Gen Sinha said that “for the last 30 years a low intensity conflict is going on, it’s like a proxy war. The question is not when will we be at war? The point is that Pakistan is winning this war; in bunkers, our men have been killed. We are already at war. In this war, the ISI is helping Pakistan, stone pelting is an extension of militancy. Our men are getting killed. The world must know that the epicentre of terrorism is Pakistan.”

Singh said the Congress feels the pain of those killed. The surgical operations have been ineffective. Neither the PM nor the defence minister or the foreign minister have said anything on this issue. Pakistan needs to be sent a clear message that this will not be tolerated.

Goyal said that the government has been dealing with the menace. Punitive action has been taken. “The government policy on right track,” he said.

Maj Gen Sinha said that firing from an anti-tank guided missile means that the militants have fired from inside army the post.

Bhatti said that Pakistan wants peace. To this, Maj Gen Sinha immediately asked then why is the proxy war going on?

Raju said that the hands of the defence personnel are tied. “Pakistan is capable of doing anything. Pakistan army does not respect Geneva protocol or other sauch pacts. Now the government has to change its strategy,” he said.

Maj Gen Sinha said that we will be fools if we don’t get this message.

Goyal said the army is competenet to take all the necsaary steps to retaliate.

Singh said that there is no point talking to anyone from Pakistan. “No one is going to listen to Bhatti, so no point getting such people for any debate. We have to send a clear signal to Pakistan that we will not tolerate any terrorism on our ground.”

Goyal said that there is no point politicising the issue. “Pakistan has to be brought to its knees. We have to think of a permanent solution. Our respnse should be pro-active not reactive. There is no sanctity of LoC. At the ground level we are capable of giving Pakistan a clear signal that such acts will not be tolerated ,” Maj Gen Sinha added.

“Ceasefire violations have to be stopped. Tough policies are needed now,” Raju said.

When Bhatti denied any surgical strike by India, Anant said it’s a typical case of the hurt party not accepting defeat.

Maj Gen Sinha lamented that the defence budget is going down. “So far homeland security is our strategy, and that should change,” he said.

Goyal said that the government will soon give an appropriate reply to Pakistan.