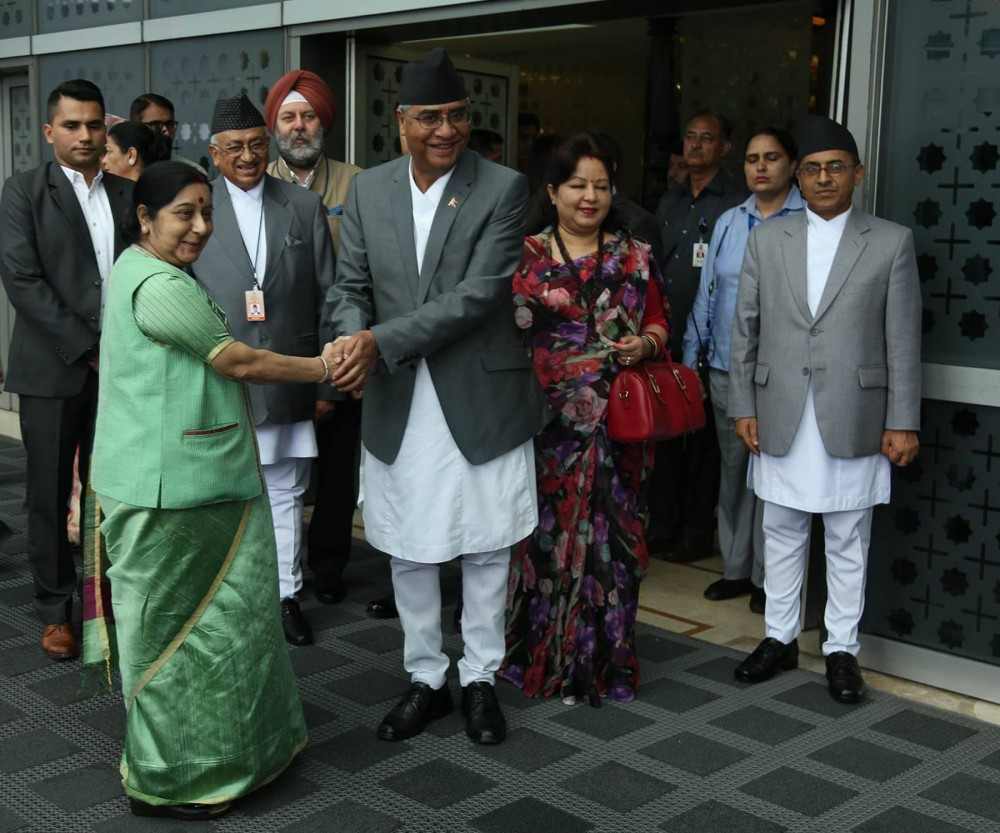 Amid India-China standoff in Doklam, Nepal’s Prime Minister Sher Bahadur Deuba has arrived in India on Wednesday for a five-day official visit. External Affairs Minister Sushma Swaraj received him at the airport in the national capital.

This is Deuba’s maiden visit abroad after assuming office in June 2017. He is accompanied by his wife Arzu Deuba Rana,  and a high level delegation including ministers and members of parliament.

During his visit Nepal PM will call on President Ram Nath Kovind, Vice President Venkaiah Naidu and Prime Minister Narendra Modi. External Affairs Minister and other Ministers will call on the Nepalese PM.

Prime Minister Narendra Modi made a phone call to his Nepalese counterpart to convey condolences at the loss of lives due to floods in the Himalayan nation and extended all relief assistance.

Sushma Swaraj met Deuba in Kathmandu while attending 15th Ministerial Meeting of the Bay of Bengal Initiative for Multi-Sectoral and Economic Cooperation (Bimstec) on August 10 and 11.

Besides New Delhi, Deuba will visit Hyderabad, Tirupati and Bodh Gaya. He will also inaugurate the electricity transmission line from India to Nepal.

A statement issued by Ministry of External Affairs said, “In recent years, India-Nepal partnership has witnessed significant growth in all areas of cooperation. The visit will provide an opportunity to both the sides for holding wide-ranging discussions on issues of mutual interest, and advancing age old, special friendly relations between the two countries.”

Nepal’s Deputy PM and Foreign Minister Krishna Bahadur Mahara, while reacting to India-China standoff recently supported peaceful resolution saying it does not want to be dragged into the boundary disputes. He also called both the countries to maintain cordial relations through peaceful diplomacy and dialogue. He was quoted as saying: “We do not support any of our neighbors in this case.”

According to sources, Indian and Chinese diplomats were regularly meeting with Nepalese officials and diplomats in Kathmandu, New Delhi and Beijing to get support but Nepal has been maintaining “equidistance” over the issue.

The two sides are expected to discuss the connectivity and energy cooperation, extradition and mutual legal assistance, compensation to the Nepalese families affected by the construction of Koshi Dam and flood controlling mechanism constructed and controlled in Nepal by India.