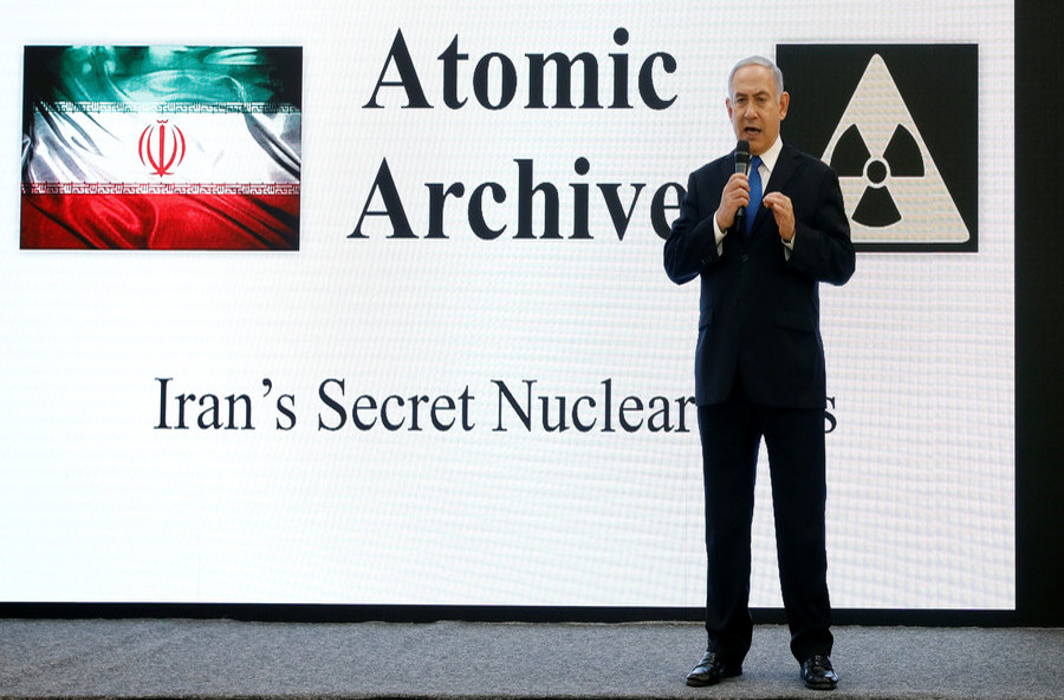 Amidst growing US President Donald Trump’s threat of pulling out of Iran nuclear deal on May 12, Israeli Prime Minister Benjamin Netanyahu has claimed of possessing evidence of Iran keeping an “atomic archieve” at a secret compound in Tehran. Iran calls it  “baseless” while US says it is “authentic”.

The revelation came after hours of US Secretary of State visiting Israel was made on Monday evening. Netanyahu claimed, what he called, evidence Iranian officials were “brazenly lying” when they said Iran wasn’t pursuing nuclear weapons.

He was quoted saying, “Tonight I’m here to tell you on thing: Iran lied—big time”. Before going into the details, Netanyahu called it one of the greatest achievements in the history of Israeli intelligence. He displayed, what he said, were filed that demonstrate Iran planned to continue pursuing a nuclear weapons program despite the 2015 deal, it brokered with the international community.

In his effort to reach to the maximum audience worldwide, Netanyahu had chosen to speak in English language. Generally, he prefers speaking in Hebrew. He accused Iran of ramping up efforts to obscure the files in 2015 and moving them to a secret location in Tehran last year.

He further claimed the files were kept inside an “innocent-looking compound” at Shorabad District in Tehran. The 100,000 files contain, among the other things, blueprints, charts, photos, videos and presentations dealing with nuclear weaponry.

Reacting to Israeli PM’ allegations, Iranian foreign minister Javad Zarif tweeted, “Pres. Trump is jumping on a rehash of old allegations already dealt with by the IAEA (International Atomic Energy Agency) to ‘nix’ the deal. How convenient. Coordinated timing of alleged intelligence revelations by the boy who cries wolf just days before May 12. But Trump’s impetuousness to celebrate blew the cover.”

Pres. Trump is jumping on a rehash of old allegations already dealt with by the IAEA to “nix” the deal. How convenient. Coordinated timing of alleged intelligence revelations by the boy who cries wolf just days before May 12. But Trump’s impetuousness to celebrate blew the cover. https://t.co/5gxmmZcrF7

BREAKING: The boy who can't stop crying wolf is at it again. Undeterred by cartoon fiasco at UNGA. You can only fool some of the people so many times. pic.twitter.com/W7saODfZDK

Meanwhile, Abbas Araqchi, Iran’s deputy foreign minister said on Monday that Israeli PM is playing a “baseless childish, naïve game”. Press TV quoted him saying, “When we saw from Netanyahu was nothing but a childish and ridiculous show.” He also added that it was also a repeat of Netanyahu’s speeches in the past.

He said that Israeli PM is trying to affect US President Donald Trump’s upcoming decision about Iran nuclear deal, known as Joint Comprehensive Plan of Action (JCPOA). However said that Iran does not care about Netanyahu’s allegations.

Araqchi also said that such allegations against Tehran have already been proven wrong by the International Atomic Energy Agency (IAEA).

Reacting to Israeli PM’s assertions, White House issued a statement saying, “The United States is aware of the information just released by Israel and continues to examine it carefully. This information provides new and compelling details about Iran’s efforts to develop missile-deliverable nuclear weapons.”

The statement further said, “These facts are consistent with what the United States has long known: Iran had a robust, clandestine nuclear weapons program that it has tried and failed to hide from the world and from its own people. The Iranian regime has shown it will use destructive weapons against its neighbors and others. Iran must never have nuclear weapons.”

US President Donald Trump applauded Israel’s announcement and said it shows he was “100% right” in criticizing the 2015 pact agreed to by former US President Barack Obama, Russia, China, the United Kingdom, France and Germany.

“In seven years, that deal will have expired and Iran is free to go ahead and create nuclear weapons. That is not acceptable. Seven years is tomorrow,” Trump said.

Meanwhile, Federica Mogherini, the chief of  EU foreign policy, says  that the “documents” presented by Israeli premier on Iran’s “secret” nuclear work fail to question Tehran’s compliance with the 2015 nuclear deal. She has suggested that such claims should solely be assessed by the UN nuclear watchdog IAEA.

She said, “What I have seen from the first reports is that Prime Minister Netanyahu has not put into question Iran’s compliance with the JCPOA commitments. Mogherini had played important role during dialogue between Iran and P5+1 leading to the nuclear agreement.

According to AFP, US Secretary of State Mike Pompeo, who was CIA director until recently, said that Israel’s newly released package of intelligence on Iranian nuclear weapons program was “authentic and much of it was new to US experts.

Pompeo met Israel’s PM Benjamin Netanyahu on Sunday at military headquarters in Tel Aviv and was briefed on the material, which was released as he flew home. During his three day three-nation tour in the Middle East, Pompeo visited Saudi Arabia and Jordan as well.

While flying back to Washington, Pompeo told accompanying media persons on his plane, “We’ve known about this material for a while and we certainly discussed this material yesterday when we were together.”

He was quoted saying, “It’s been something that’s been in the works for a while. I know that there are people talking about these documents not being authentic. I can confirm with you, for you, that these documents are real, they are authentic.”

Iran and five permanent members of UN Security Council: the US, France, Britain, Russia and China- plus Germany, known as P5+1 had signed the nuclear agreement on July 14, 2015 and started implementing the same on 16 January 2016.