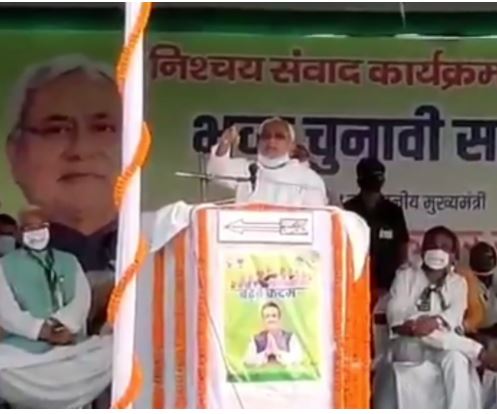 Nitish Kumar took a dig at the Mahagathbandhan CM candidate Tejashwi Yadav in a rally in Begusarai. Yadav has taken the battle to the National Democratic Alliance camp forcing Nitish Kumar, who is looking painted into a corner, into indulging in such unbecoming personal attacks. Similarly, Kumar had resorted to shouting at people raising slogans in support of Lalu Yadav to go away from a rally on Wednesday.

Tejashwi Yadav has ridiculed the Chief Minister of being physically and mentally tired and has levelled charges of 60 scams on his watch  over the last 15 years.

On Saturday, however, Nitish Kumar recalled the lawlessness of Bihar when the RJD was in power. He said crime was at its peak then but today if anyone does anything wrong or breaks the law, they will definitely go to jail. Kumar had earlier said that if NDA came to power, the alliance would give Rs 25,000 to young women, who passed their intermediate exams. Women who clear graduate exams would get Rs 50,000. The Nitish Kumar government is currently giving sums of Rs 10,000 and Rs 25,000 respectively.

The Bihar Chief Minister has indirectly aimed at Lalu Yadav, who still commands a mammoth following, in the run-up to this election and not at Tejashwi Yadav. On Tuesday, he sneered at the younger Yadav’s 10 lakh jobs promise and asked if he would use money from “the same scam” to pay for salaries.

Tejashwi Yadav has kept up his attack on the state government on unemployment and education, with Nitish Kumar being targeted for his failures in these fields in this term in office. Bihar votes for a new 243-member Assembly in three phases starting October 28, with results due on November 10.