Nitty-Gritty of Success : Journey of YouTube Star Arvind Arora aka A2 Motivation from a humble living towards success 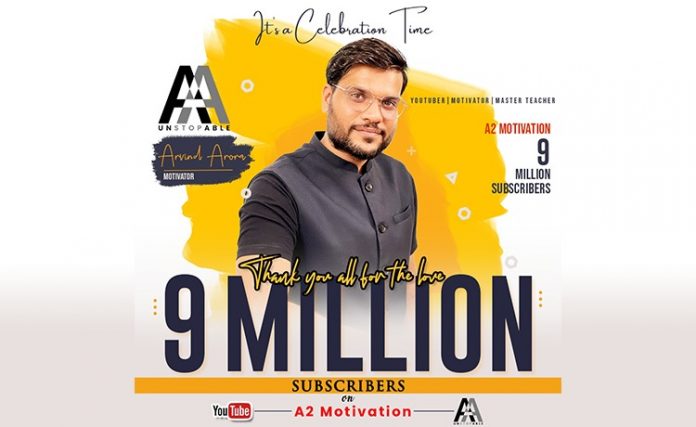 As we move in life, life awaits us with many unlooked for things which may be good or bad. Coping and moving above all these leads to unprecedented discoveries. Such little discoveries have been the reason of success for the most dynamic and one of the leading YouTube Star Arvind Arora. His channel A2 Motivation with 9.13 Million subscribers is a celebrated name in the digital world.

A small town boy from Rajasthan, Arvind had simple dreams as any common man would have in a middle class family.  His family ran a humble business of shopkeeping and he completed his education under various financial constraints. However face-off with general perception of his relatives that he could become nothing beyond a shopkeeper brought unprecedented changes in his life. He took risky decisions with a single thought that he will be the sole dictator of his fate. From taking an education loan to earn an Engineering degree, passing through neglection and then finally achieving success; he has faced every taste of life. Excitingly, his first job offered him a salary of just ₹11,000 per month and he even used to paste posters in various colleges to earn a living.  As a GATE teacher he gave 2 years of his life to a coaching institute, however he was flim-flamed and asked by his partner to leave.

Adding to his woes, when he reached Gujarat he wasn’t having a single penny to meet his daily needs. But here, his life took a dynamic turn towards another discovery and he got to know about his hidden talent of artistically communicating with students : unexpectedly a GATE tutor now became a Chemistry teacher. He made a YouTube Channel- “Made Ejee Chemistry” and started uploading teaching videos which eventually grew. His efficiency in Chemistry can be traced from his publications and he is renowned author of Chemistry books (like CBSE Class 12 Ouestion Bank – Chapter Wise and Topic Wise Chemistry) for Class XII.

All the hope and his optimistically high spirit to face the challenges made him locate the Phoenix in himself.

Beginning his YouTube journey as a Chemistry teacher, he then expanded his horizon as Video Creator, which brought a revolution in domain of YouTube as a channel beyond its restricted genre of entertainment.  His channel A2 Motivation is currently the No. 1 YouTube shorts channel and features his most extensive motivational facts based and educational videos. Currently the owner of 7 Silver and 2 Golden YouTube Play Buttons his channel is now on verge of being awarded with a Diamond Play Button.

A much closer look at alchemy of his achievements, he is an independent YouTube star with highest views in India and has a fan popularity of 21+ million followers in all the social media platforms.  Coupled with this impressive persona, he is highly acclaimed for motivating people and providing A2 student scholarships to those in need. A2 Motivation team has a mission of reaching each household (Har Ghar tak Pahunchana) and is working on motto of strengthening people economically, socially, mentally and emotionally via their regular live sessions on investment fundamentals.

Read Also: Renault Duster to be discontinued this year, new-gen to launch in 2022

The accomplishments are huge and these were borne out of little strides through HOP (Hope, Optimisim, Passion) and revelations of the hidden discoveries towards SELF.