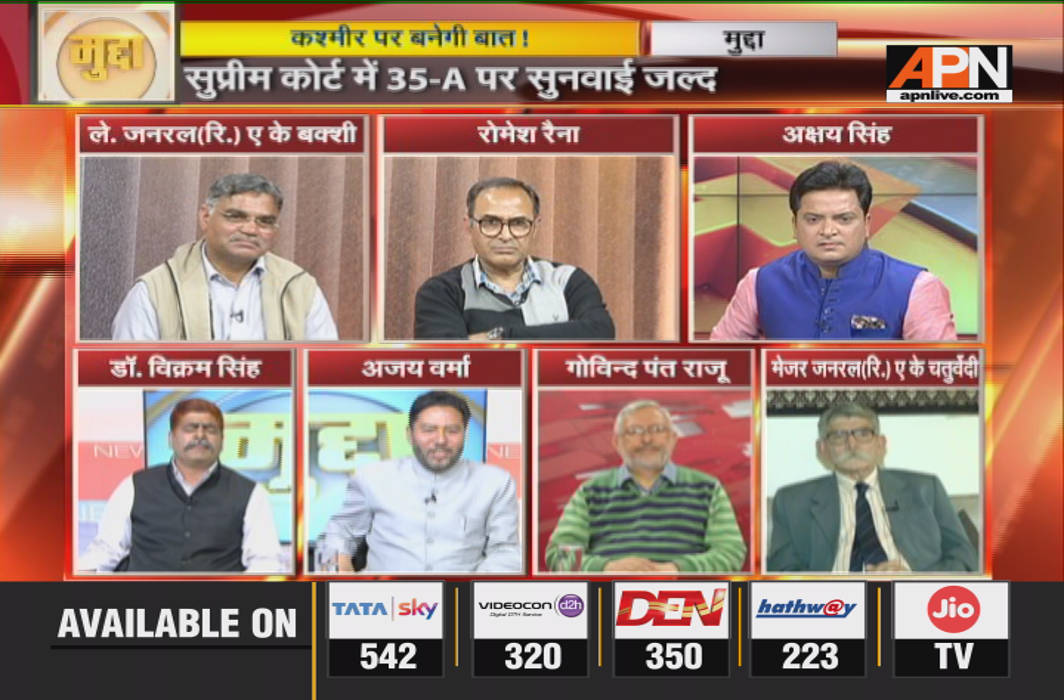 The Jammu and Kashmir administration has ruled out any change in its stand on Article 35-A , a law that gives special powers to people of the state, and maintained that only an elected government can argue the matter before the Supreme Court.

Security has been beefed up in the Valley amid the debate on Article 35A. Petitions have been filed in the Supreme Court challenging the validity of Article 35-A of the Constitution.

Meanwhile, Pakistan PM Imran Khan has asked Prime Minister Narendra Modi to “give peace a chance” and assured him that, true to his word, he will act immediately if New Delhi provides Islamabad with “actionable intelligence” on the Pulwama terror attack.

Bakshi said: “Art 35 A is a legal subject. When it was introduced, it was on the advise of parliament. Those who oppose it say that technically it is not the right thing to do. As per time and space, I would say it should go. However, Supreme Court will decide on this.”

Chaturvedi said: “I agree with Bakshi. Art 14 is also there regarding equality to all citizens. There has been no development in the Valley, so no jobs, and that has led to a rise in stone pelters. The state needs to have complete integration with the nation. In the given situation, there is misuse of Art 35 A. This is not right.”

Raina said: “Kashmiris were not getting employed, and non-Kashmiris would get the jobs. Therefore, it was decided that non-mulkis should not get the jobs. But it got diluted, and mulki became a state subject. I am of the view that Art 35 A should go, because today’s separatism is because of that.”

Verma said: “Time changes, things change. When Rajendra Prasad was President, the Act was needed. Today, noteban is considered important. Prime Minister Modi will decide on this, who are we to give opinion.”

Raju said: “Congress politics played a part in introducing Art 35 A. There was a pact with Sheikh Abdullah. It was a result of the politics of that time. Those who want that it should not be changed, are in fact anti-development. Congress is not even willing to spell out its views on the matter. So that’s why for some there was a stalemate on this.”

Singh said: “We cannot believe what the Pak PM says. There is nothing to believe in Imran’s words. Why does Pak PM not conduct his own probe into the Pulwama attack?”

Bakshi said: “Out of 22 districts only five districts in the Valley have public sentiment that is aggressive. In rest of the districts, people want peace. “

Chaturvedi said: “Ongoing defence meetings will help, and right action will be taken at the right time. The defence minister reviews situations routinely. There is no point in creating a war hysteria. I don’t agree with Pak PM. There is enough evidence of JeM there. He is only talking Rawalpindi HQ language.”

Raina said: “Art 35 A is like a political blackmail. In 1952, Delhi signed a pact, in 1975 there came another pact, then Rajiv accord…in other places, there have not been so many accords. Why does Kashmir need Art 35 A? Kashmir kids go all over the country for education.”

Verma said: “Raina is talking as if he was there when Art 35 A was introduced.” When Verma dragged the debate on noteban, Akshay said that is not the debate today.

Raju said: “Art 35 A takes away many rights guaranteed in the constitution, in a certain context.”

Bakshi said: “When politicians talk to garner attention, people can see though it.”

Raina said:”Art 35 A must go; regarding women rights, SC has laid out that Kashmiri ladies will not lose rights after they marry outside, but children of such women cannot claim heritage.”

Verma said: “The government needs to get out of poll mode.”