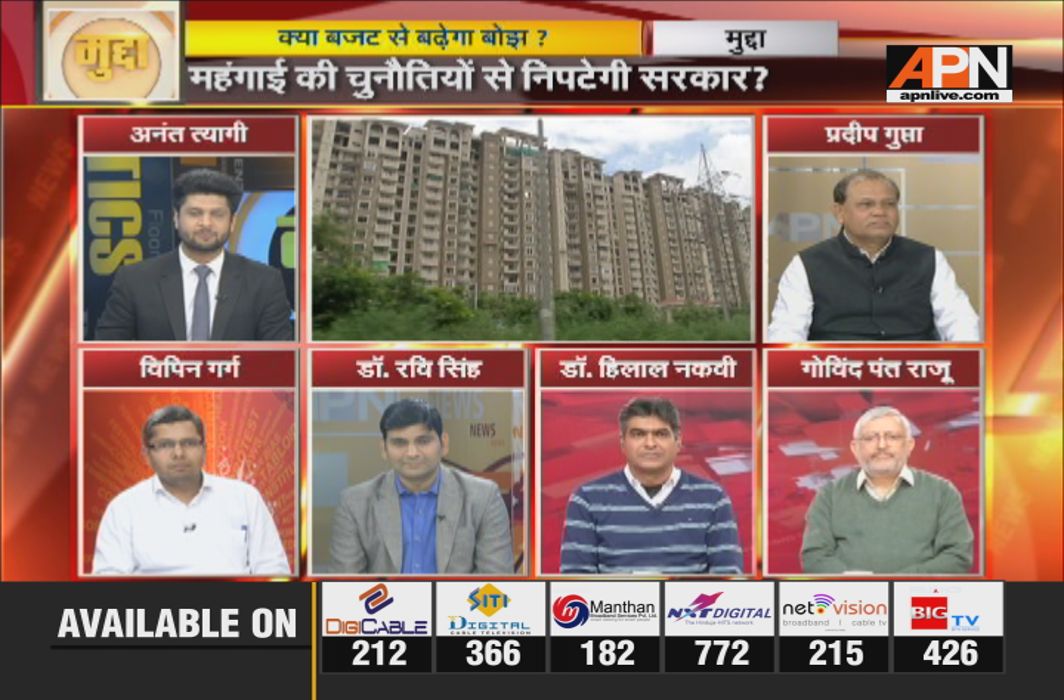 Contrary to expectation, Prime Minister Narendra Modi has indicated that the upcoming Budget will not be a populist one and it’s a myth that the common man expects “freebies and sops” from the government. In an interview with a television channel, he pledged that his government will stay on the course of the reforms agenda, and defended the GST move.

Starting the debate, Singh said that people are waiting for tax benefits. “Subsidies like that in MGNREGA should go down to check inflation,” he said.

Gupta said that real estate has been badly affected, and businessmen are worried about the GST regime. The government should focus on growth rate. “Increasing taxes are affected businesses, especially the real estate sector,” he said.

Garg said that the tax relief slab should be increased, from the existing Rs 2.5 lakh.

Naqvi said that the budget should boost job creation, the agriculture sector, and reign in the spiraling costs of petrol and diesel that affect overall production.  He said that the “Make in India” programme funds have not been properly allocated, the government needs to focus on food security, right to education, and overall economic upliftment.

Giving the BJP perspective, Goyal said that the Modi government is committed to work for the poor. “This budget is going to fulfill people’s aspirations and will not give false promises. During the Congress’ time, the average inflation was 10 percent, but today it is three percent, GDP is on the rise, electrification, roads and railways work is on track, and tax revenues are up… these are all signs that the economy is on right track,” he said.

Singh said that Goyal is exaggerating. “Figures talk a different story. Employment rate is far too low,” he said.

Naqvi pointed out that Goyal’s claims are not even in synch with the figures on the government website.

Garg said that small traders are suffering. “SMEs are the main manufacturing sector, and the budget should focus on giving a boost to them,” he said.

After the break, Goyal and Naqvi were locked in a heated exchange over inflation figures.

Goyal said that the loan offered via Mudra Bank is to benefit the poorest of the poor, whom the Congress never bothered to cater for. “NPAs have been the Congress’s gift. EPF accounts have risen and that shows that employment rate is steady and rising,” he added.

Gupta said that farmers and traders have been committing suicides. “After note ban and GST, small businesses have been affected,” he said.

Raju said the poor and middle class need to see the difference, and feel the upswing in the economy. “All-round fares are up, and the common man is not able to enjoy simple facilities like that of the railways,” he said.

Goyal said that in the last 3.5 years, a lot of work for the betterment of the poor is being done.

Singh said that fiscal deficit target has not been met. “GDP growth alone does not affect the common man. It’s the prices of basic food and commodities that affects the common man,’’ he said.

Raju said that the budget must be in favour of people and in line with people’s expectations, or else the 2019 Lok Sabha election results will not be the way BJP would like to see.

Talking of the progress made by the Modi government, Goyal said that the Congress introduced a deluge of real estate projects, many of which are yet to see the light of the day. To regulate the sector, the government brought in the RERA Bill, he said.

Dr Ravi said that the spiralling taxes need to be kept in check and the government needs to focus on the agriculture sector.