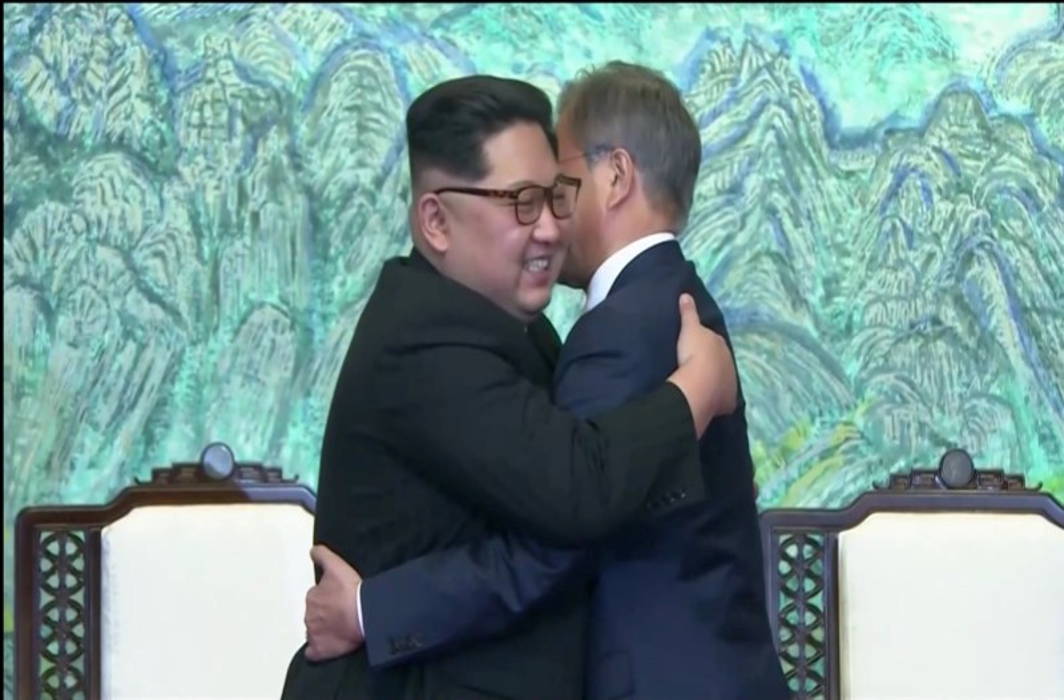 In an unprecedented move in the recent world history two arch rivals have come together across the table to resolve their long lasting issues. North Korea’s Kim Jong-un and South Korea’s Moon Jae-in have pledged to formally end the 1950s Korean War and pursue “complete denuclearisation” of the peninsula. The Summit took 11 years to bring the two leaders together. Earlier summit was held in 2007.

The two leaders signed a joint statement on Friday after the summit that saw Kim become the first North Korean leader to step into South Korea since the end of war in 1953. The peace talks were held in a demilitarized zone in Panmunjom village.

According to reports, a strictly choreographed day of talks and symbolic gestures momentarily gave way to some spontaneity when Kim asked his South Korean counterpart to reciprocate by briefly stepping into North Korea.

The signing of the declaration came after two rounds of talks between the leaders and a tree-planting ceremony.

According to the statement, the two leaders pledged to sign a peace treaty later this year and involve the United States and probably China in the process.

Kim and Moon also promised to pursue the end of nuclear weapons on the peninsula, though the text of the statement did not include specific measures or a timetable.

Kim Jong Un, speaking after signing the declaration said, “I feel that we are part of one family and both countries will have a new policy of cooperation. After years of disputes, we are here today to say that nothing will make us different again.”

South Korea’s President Moon Jae in praised Kim for freezing his country’s nuclear testing programme, saying it would be a “valuable beginning”.  He further said, “Kim Jong-un and I declare that there will be no more war on the Korean Peninsula and a new age of peace has begun.”

As part of the agreement, the Koreas said they would refrain from the use of force and would deepen ties, working towards reunification. This is considered to be a major step forward for restoring peace and stop weapon race in the peninsula.

Under the ne scheme of things a communications post is to be established in Kaesong, North Korea while loudspeaker broadcasts and distribution of propaganda leaflets on each other side will end on May 1. Moon is due to visit the North Korea’s capital, Pyongyang, in the coming months.

Meanwhile US President Donald Trump has appreciated the summit in his tweet post. He said, “After a furious year of missile launches and nuclear testing, a historic meeting between North and South Korea is now taking place. Good things are happening, but only time will tell!”

Trump is scheduled to meet with North Korean leader Kim Jong Un sometime in late May or early June this year. He said on Friday there were now only “two or three sites” under consideration for the US-North Korea summit.

UN Secretary General’s spokesman Stephane Dujarric said “many around the world were moved by the powerful imagery of the two leaders coming together to advance harmony and peace on the Korean Peninsula.” He further said, UN Secretary General Antonio Guterras “salutes the courage and leadership that resulted in the important commitments and agreed actions”.

Russia, Japan and China have also appreciated the historic summit between the leaders of the two Koreas. Moscow called the meeting as a “very positive news”.

China’s foreign ministry issued a statement saying it hoped all parties could maintain the momentum for dialogue and jointly promote the resolution process.

Japan’s Prime Minister Shinzo Abe said he expected North Korea to take concrete steps towards carrying out its promises. He added Japan was “absolutely not” being left out of the denuclearisation process. He said that he will keep close contact with the US and South Korea.

The summit concluded with a ceremony with live music and a video titled A New Spring Enjoyed Together, which was projected onto the Peace House in Panmunjom village.

At the end of the Summit North Korean leader boarded a black Mercedes Benz limousine that drove him and his entourage back to the Pyongyang.