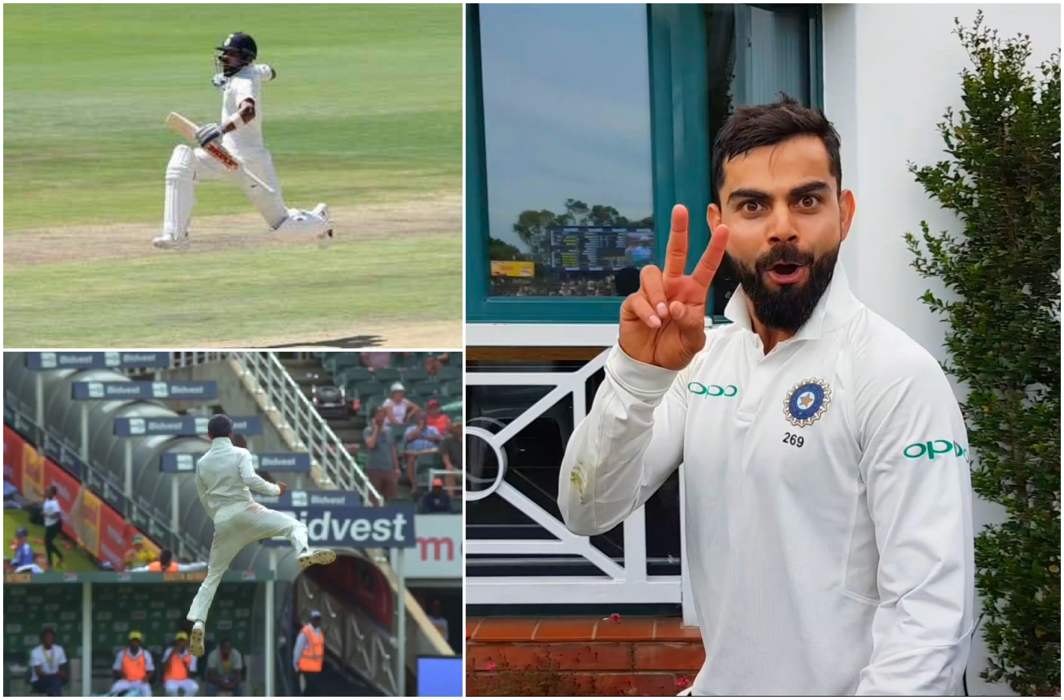 Kohli’s fans across Twitter were seemingly more impressed with his celebratory jumps – especially the one after the dismissal AB de Villiers in the 2nd innings.


With the Indian cricketing squad clinching a historic victory against South Africa in Johannesburg, captain Virat Kohli’s crucial knocks (54, 41), on the extremely tough batting surface, mark a major contribution for the team to register the 63-run win.

However, the firebrand skipper’s technique and high-skilled batting performance against the aggressive South African pacers was not the only spectacle which grabbed the eyeballs. Kohli’s fans across social media platforms were seemingly more impressed with his celebratory jumps – especially the one after the dismissal of key South African batsman AB de Villiers in the second innings of the game.

And while Kohli described the Saturday’s win at the Wanderers as “a massive milestone” for Indian cricket, Twitterati got flooded with posts sharing pictures of Kohli’s ‘Gravity-Defying’ Jump.

If kohli was not cricketer, india could have got gold medal in
(Olympics) high jump. pic.twitter.com/6gmBEPp6ne

Lauding the team’s performance after the win, Kohli said that the team’s efforts on a pitch designed to help the home team showed that the Men in Blue can clinch victory in any conditions.

“This is one of our sweetest wins. This day will be remembered for a long time for us as a team. We already had the belief but now we have the result to back that as well. If we think about winning Test matches, yes, we will lose some but we will end up winning a lot as well,” said Kohli.

Comparing India’s latest victory with the team’s 2014 win, under the captaincy of Mahendra Singh Dhoni, against England at Lord’s, Kohli said, “Lord’s was very special because we were playing on a similar sort of pitch.”