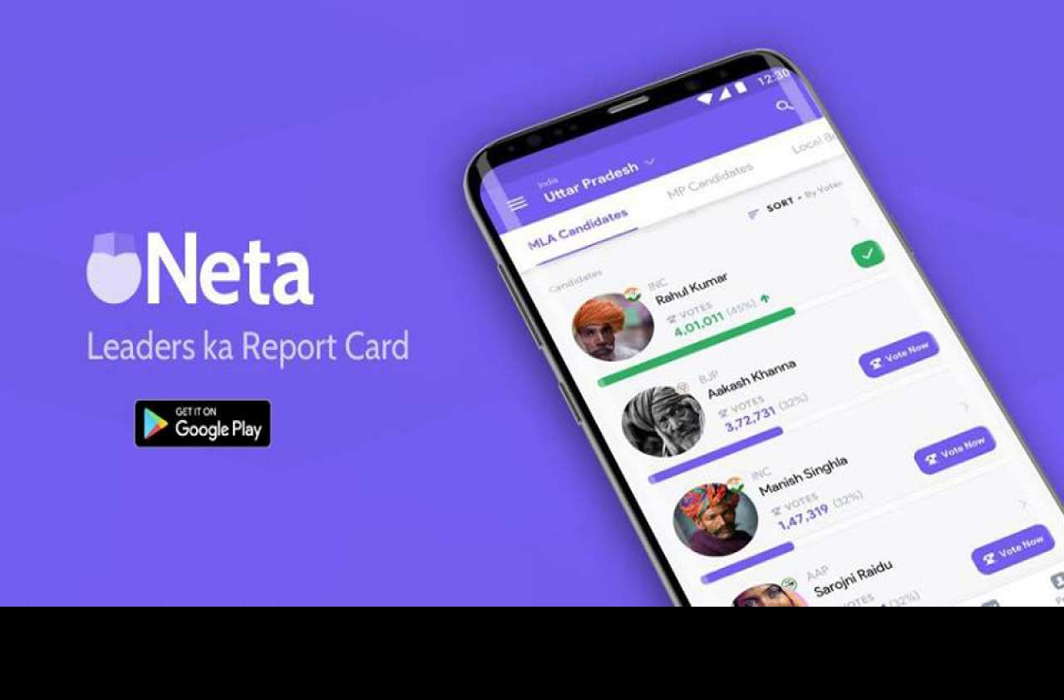 Seen to be a game changer for psephology and termed a “milestone” by former President Pranab Mukherjee, a young developer has made an app called ‘Neta’ that enables voters to rate their political representatives.

Speaking at the launch of the app, developed by 27-year-old entrepreneur Pratham Mittal, Mukherjee said, “A good democracy cannot work without informed voters, good leaders and complete transparency and accountability.”

“Feedback from people is of critical importance… It gives an opportunity of empirical evidence of gauging public mood and doing a course correction,” Mukherjee said.

According to the app’s developers, “Neta app aims to create a deep impact on the political engagement in the country. Apart from the obvious ability to let people rate their MLAs and MPs, the app serves as a useful barometer to gauge voter sentiment at any given point of time, across each constituency. Neta also provides new leaders with an opportunity to showcase their popularity and catch the attention of political parties… Anyone interested in fighting an election can get featured on the app by gathering a 1,000 votes from their constituency.”

Praising the app, Kejriwal said it would help people vote beyond “caste and religion”. “In a democracy like ours, there are many people who are unable to meet their representatives due to the size and scale involved. In such an atmosphere, this app will be able to offer voter feedback to representatives on their performance. It will also help parties gauge the performance of their leaders and help them decide which candidates to offer tickets to.”

But both he and Quraishi warned against the app falling prey to political bias. “I have no doubt that this is going to be a game changer in India’s politics. But just one word of caution. You will be tended and cajoled by political leaders to toe their line, and show them in a better light. Please resist the temptation and maintain your neutrality and non-partisanship,” said Quraishi.

While the formal launch of the Neta app happened on Friday, it had been running in the beta mode for the last eight months, during which the Karnataka elections were also conducted. It had a strike rate of 92.7 per cent, based on 2.5 million responses, in predicting the Karnataka assembly polls in May, according to Mittal.

He said over 1.5 crore verified voters have already rated or reviewed their local leaders across 543 parliamentary constituencies and 4120 assembly constituencies in the country. It targets to have 100 million users on the platform before 2019 elections.

In order to ensure participation across demographies, including the rural areas, the app uses multiple mediums like IVR calls, SMS and even offline activations with the help of Aashawadi and Aanganwadi workers.

Mittal, who studied at Dehradun’s Doon School and University of Pennsylvania, finds it troubling that the electorate in India votes on caste and religious lines, rather on issues of development.

“The world’s largest democracy deserves a platform where we as voters can rate our politicians and question them. Neta aims to do just that. We are looking to have 100 million users on the platform before 2019 polls,” Mittal, who hails from a business family, said. The family runs the famous Lovely Sweets Shops in Jalandhar, and also the Lovely Professional University, where his Ashok Mittal is chancellor and mother Rashmi pro-chancellor.

If Neta app’s data is any guide, the BJP is poised to lose as many as 70-seats if Lok Sabha elections were to be held now, and that is without factoring a Samajwadi Party-Bahujan Samaj Party alliance in Uttar Pradesh. According to the app, BJP is down to 212-seats from its 2014 tally of 282, while the Congress is up from 44-seats to 110-seats.

In Rajasthan and Madhya Pradesh, two of the four states going for assembly polls by November-end, the app has surveyed approximately 100 voters in each of the assembly constituencies. According to Sharrma, Congress party’s Ashok Gehlot remains the most popular leader in Rajasthan with 42.3 per cent approval ratings, followed by Chief Minister Vasundhara Raje with 33.3 per cent and Congress party’s Sachin Pilot with 20.7 per cent approval ratings.

In Madhya Pradesh, Congress party’s Jyotiraditya Scindia has the highest approval ratings among the state’s leading politicians. If Scindia’s rating is 48.9 per cent, Chief Minister Shivraj Singh Chouhan’s is at 42.6 per cent, Congress party’s Kamal Nath at a meagre 6.4 per cent and Digvijaya Singh at an abysmal 2.1 per cent.

Neta app is available on Android and iOS platforms, and can also be accessed through a website in 16 languages. Mittal says the app tries to factor in the social and economic heterogeneity of India by reaching out to rural areas by using multiple mediums like IVR calls, SMS and offline outreach with the help of Aashawadi and Aanganwadi workers.

Neta app isn’t Mittal’s first venture. In the US, he started Outgrow, a platform that enables polling on websites.

Sharrma, who was earlier with election strategist Prashant Kishor, say the platform uses blockchain to put in place sufficient safeguards to protect data. The team also claims to weed out fake voters by cross verifying registered users with the help of electoral rolls, Aadhaar and apps like Truecaller.

The app will give list of top five contenders for a particular seat and voters can cast their online vote to indicate their preference, or rate the performance of their existing representative. It also claims to offer newcomers an opportunity with anyone interested in fighting an election can get featured on the app by gathering 1,000 votes from their constituency.

The company has no immediate plans to monetise the business.

“We do not have a monetisation plan. Right now, we do not have too many expenses. We just want to build credibility. Monetisation will come down the road,” Mittal told Moneycontrol. “But we will not go to business houses or political parties. We will figure out other ways. For example, we will work with media organisations. If we have this data, may be we can share it with media houses in exchange of a small licensing fee,” he added.

The company has been funded by friends and family and has no plans to raise an institutional round.

Both his parents run the Lovely Professional University. His father, Ashok Mittal, is the  chancellor while mother Rashmi is the pro-chancellor of the university.

Mittal holds a Bachelors degree in engineering and political science from the University of Pennsylvania. Before launching NETA, he founded Outgrow, a growth marketing platform that enables marketers to build interactive content or tools to increase customer engagement and boost demand generation.