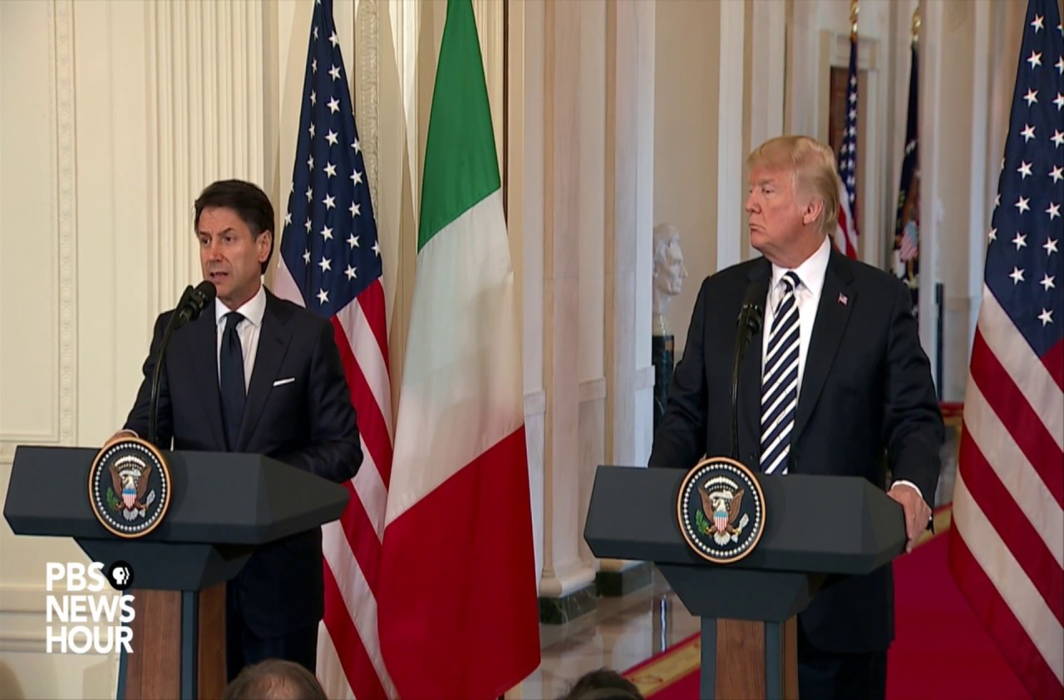 US President Donlad Trump has said on Monday he would be willing to meet Iran’s leader “without preconditions” to discuss how to improve ties. However, Secretary of State Mike Pompeo, within hours, set conditions before any dialogue with Iran.

According to Reuters, while addressing media persons in White House on Monday along with Italian PM Giuseppe Conte, Trump said, “If they want to meet, we’ll meet.” He further said, “I’d meet anybody. I believe in meetings, especially in cases where war is at stake.” He was responding to a question if he was willing to meet with Iranian President Hassan Rouhani.

Observers believe that Trump has lately realized his mistakes by threatening Iran. On Tuesday last, while addressing Veterans of Foreign Wars (VFW) national convention in Missouri, Trump was quoted saying, “Iran is not the same country anymore, that I can say” and expressed his readiness to make a “real deal” with the country over its nuclear program.

Trump claimed, “I do believe that they will probably end up wanting to meet. And I am ready to meet any time they want to. And I don’t do that from strength or from weakness. I think it’s an appropriate thing to do.”

Responding to US President’s  statement Iranian President’s Hassan Rouhani’s advisor Hamid Aboutalebi said on Tuesday that any talks with the Washington  had to start with reducing hostility and a return to the nuclear deal.

“Respect for the great nation of Iran, reduction in hostilities, US returning to the nuclear deal… That will open the rocky path of the moment,” wrote Hamid Aboutalebi in Persian language on Twitter.

He also talked about creating conducive atmosphere preparing for the meeting.

Moreover, Iranian Foreign Ministry spokesman Bahram Qassemi suggested earlier in the day that engaging in negotiations with the “current  America” is next to impossible.

Iranian FM Spokesman Bahram Qassemi ruled out the possibility for holding talks between Tehran and Washington on regional issues.
"The #US hostile measures against #Iran have quashed any possibility of talks between Iran and that country," Qassemi told reporters on Monday. pic.twitter.com/hSV3gI21XQ

He further asserted that a military confrontation between Iran and the United States is out of the question, yet the Islamic Republic is ready for such scenario.

However, US Secretary of State Mike Pompeo, within hours, contradicted to what Trump said at White House. Talking to CNBC he set some conditions before any talks with Iran.

He was quoted saying, “We’ve said this before, if the Iranians demonstrate a commitment to make fundamental changes in how they treat their own people, reduce their malign behavior, can agree that it’s worthwhile to enter into a nuclear agreement that actually prevents proliferation, then the president said he’s prepared to sit down and have the conversation with them.”

In May this year, Pompoe had set twelve conditions for talks with Iran, which were out rightly dismissed by Tehran.

Press TV says that Trump’s latest stance towards Tehran runs counter to his recent threats against Iran and pulling Washington out of multilateral 2015 nuclear deal, known as JCPOA “despite having the support of almost all US allies”.

Earlier in May this year, President Donald Trump had pulled out US from multilateral Iran-nuclear deal, signed by five permanent members of UNSC plus Germany known as P5+1 and announced to re-impose full sanctions against Tehran in two stages in August and November this year.

Earlier last week, Iranian President Hassan Rouhani, while addressing Islamic Republic Guards Corps (IRGC) in Tehran, said that “Trump should learn well that peace with Iran is the mother of all peace and war with Iran is mother of all wars.”

On 22 July, Donald Trump, was very aggressive while responding to Rouhani’s remarks.

To Iranian President Rouhani: NEVER, EVER THREATEN THE UNITED STATES AGAIN OR YOU WILL SUFFER CONSEQUENCES THE LIKES OF WHICH FEW THROUGHOUT HISTORY HAVE EVER SUFFERED BEFORE. WE ARE NO LONGER A COUNTRY THAT WILL STAND FOR YOUR DEMENTED WORDS OF VIOLENCE & DEATH. BE CAUTIOUS!

COLOR US UNIMPRESSED: The world heard even harsher bluster a few months ago. And Iranians have heard them —albeit more civilized ones—for 40 yrs. We’ve been around for millennia & seen fall of empires, incl our own, which lasted more than the life of some countries. BE CAUTIOUS!