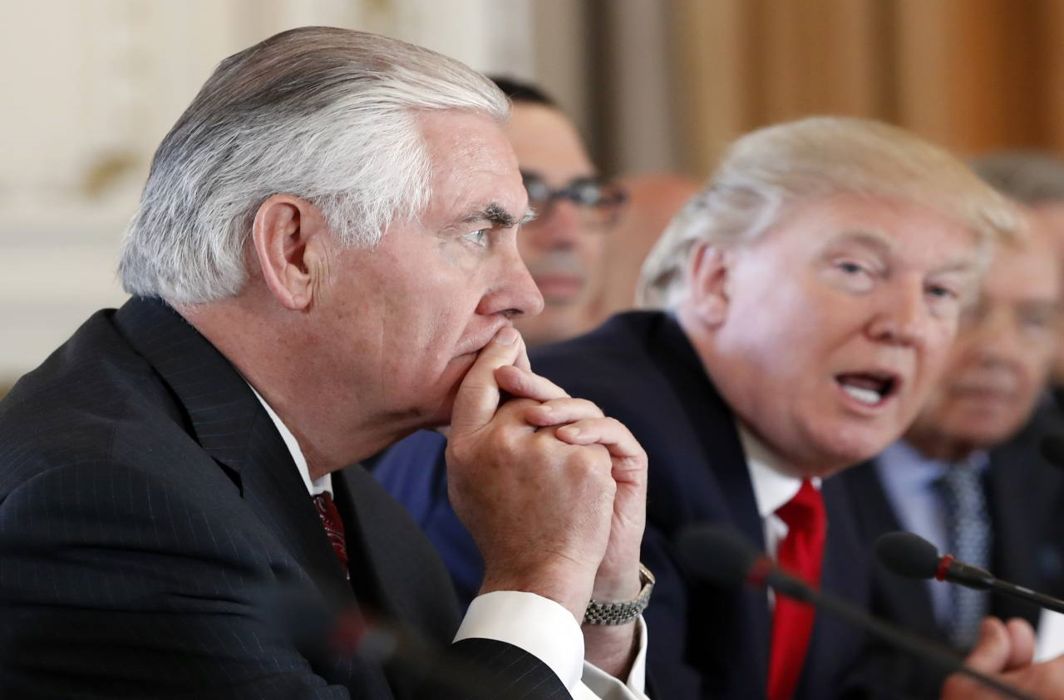 Caught with ongoing debate on Tillerson’s reported “moron” comment, US President Donald Trump has chosen to throw challenge to Secretary of State to compare IQ tests and expressed his full confidence of winning. However Tillerson has chosen to remain silent.

In an effort to come out of the unprecedented embarrassing situation, Trump responded to a question posed by Forbes journalist Randall Lane in the luxury of his Oval Office. Trump first tried to deny such comment from his cabinet colleague. However, he tried to tactfully handle the question saying “I think it’s fake news. But if he did (say) that, I guess we’ll have to compare IQ tests. And I can tell you who is going to win.”

Knowing the fate of 12 White House senior functionaries who have either resigned or were fired during last nine months, Tillerson suddenly called a press conference and announced that he has never considered resigning. However, he neither denied nor confirmed about his reported “moron” comment.

President Trump, while commenting after the interview was placed in public domain, on Tuesday, denied undercutting Tillerson by questioning his IQ. “No, I didn’t undercut anybody, I don’t believe in undercutting people.”

Trump’s comments on Tillerson’s IQ made White House press secretary Sarah Sander’s job difficult. Responding to journalist’s query she insisted: “The president never implied the secretary of state was not incredibly intelligent. He made a joke – nothing more than that. He has full confidence in the secretary of state … They’re working hand in hand to move the president’s agenda forward.”

She further tried to convince media persons as if it was not a serious issue. She said, “Maybe you guys should get a sense of humor and try it sometime … He’s got 100% confidence in the secretary of state.”

Meanwhile London based “The Independent” chose to speak with some IQ experts for getting the clearer picture on the issue.

Joel Schneider, Professor at Philadelphia based  Temple University ,who is considered to be expert on assessment of intelligence has reportedly said, “My money’s on Tillerson” pointing to his previous experience as CEO of Exxon Mobil. He further argues, “Large companies like that generally aren’t run by unintelligent people.” Schneider has 31 books, 589 citations and 7,148 reads to his credit.

However, Schneider thinks that Trump would actually be considered “bright” compared to the general population.

Another expert, Stephen Ceci, a Professor of Developmental Psychology at New York based Cornell University, has declined to discuss the IQ comparison. He said Trump would likely come somewhere in the “mid-range” of IQ scores, based on his word usage an lack of inhibition. Ceci is the winner of one of the American Psychological Society’s two most prestigious awards.

Jack Naglieri, a psychological research professor, believes Mr Donald Trump is lacking in “executive function”- the process of strategising, evaluating, decision makine and impulse control. Naglieri is Reserach Professor at the Curry School of Education at University of Verginia who has penned several books and over 300 scholarly papers.

His assessment about Tillerson is altogether different. He said, “Tillerson is clearly a person who has impulse control, who thinks things through….He’s not blurting out, he’s not impulsive, he’s not flying off the handle. He’s not telegraphing his anger like Trump does.”  He concluded saying, “I’d put my money on Tillerson any day.”