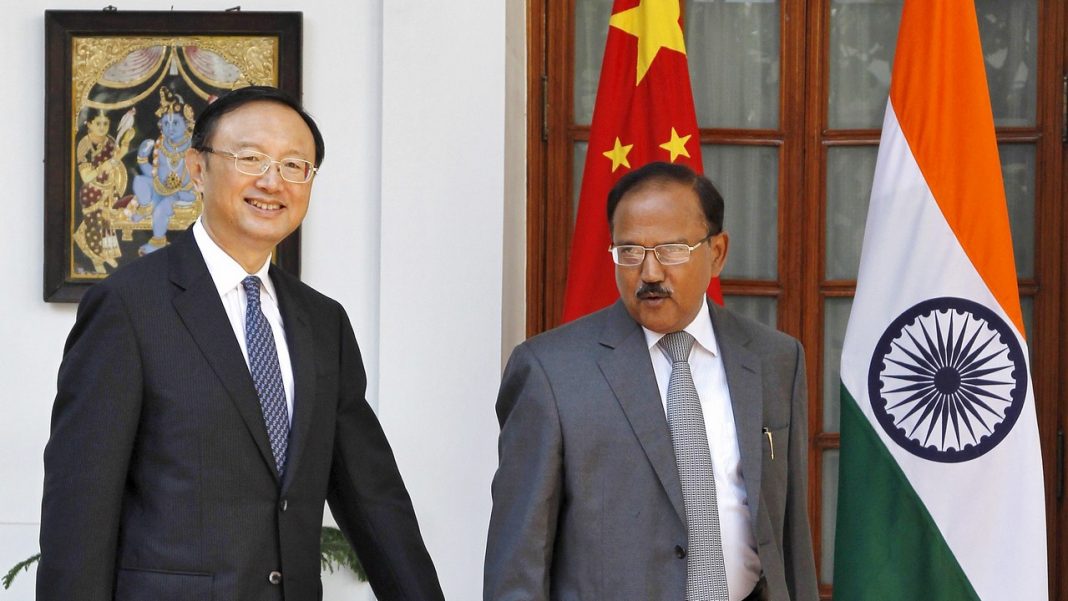 With Indian and Chinese armies locked in a standoff at Doklam, National Security Advisor Ajit Doval met his Chinese counterpart Yang Jiechi, in Beijing on Thursday on the sidelines of the BRICS NSAs meet.

Doval is in Beijing on Wednesday to take part in the two-day Brazil, Russia, India, China, South Africa (BRICS) NSAs meeting being hosted by Yang. The focus has been on his bilateral interactions with the Chinese leadership against the backdrop of the standoff and intense speculation on whether the two sides would begin a conversation to ease tensions, if not resolve the impasse.

Both Ajit Doval and Yang Jiechi are also the officials currently leading the talks under the “special representatives” mechanism between India and China to resolve the boundary issue. As many as 19 rounds of talks have been held under the mechanism.

Doval and Jiechi discussed “major problems” in bilateral relations during a meeting in Beijing on Thursday, the first substantial contact since the two sides became engaged in a military standoff in Doklam area near the Sikkim border in mid-June.

Details of their discussions were not immediately available but a brief readout from the Chinese side said Yang brought up “bilateral issues” and “major problems” during the meeting.

Earlier, there was a question mark on whether Doval and Yang would have a one-on-one meeting given that China had set the withdrawal of Indian troops from Doklam as a precondition for a “meaningful dialogue” on the standoff .

Official Xinhua news agency didn’t share details of the meeting between Doval and Yang but gave a broad outline.

“Yang also separately exchanged views with the three senior representatives on bilateral relations, international and regional issues and multilateral affairs, and set forth China’s position on bilateral issues and major problems,” it added.

It did not say what those “major problems” were and whether the on-going stand-off figured.

Yang was quoted as saying that “it accords with the common interests of the BRICS countries to strengthen their partnership, calling for the five countries to deepen communication, strengthen strategic mutual trust, enhance cooperation on politics and security issues, safeguard international justice, and promote practical cooperation in various fields in order to benefit the peoples of all countries.”

Doval will also meet with Chinese President Xi Jinping on Friday, with the five NSAs set to call on Xi at the Great Hall of the People following the BRICS summit.

There have been conflicting signals from Beijing over the scope for talks on the Doklam standoff. China had earlier this week hinted at bilateral talks with India, with the Foreign Ministry saying “usually it is arranged for the heads of delegations to hold meetings to exchange views on bilateral relations and other international issues.”

At the same time, spokesperson Lu Kang also stressed that in China’s view, meaningful dialogue on the stand-off at Doklam was not possible until India withdrew. He also said, “China and India have a smooth diplomatic channel.”

“The crux now is Indian border troops illegally stayed on China’s territory. Once again we urge India to pull back to the Indian side of the boundary. I want to stress that this is precondition for any meaningful talks between the two sides,” he had said.