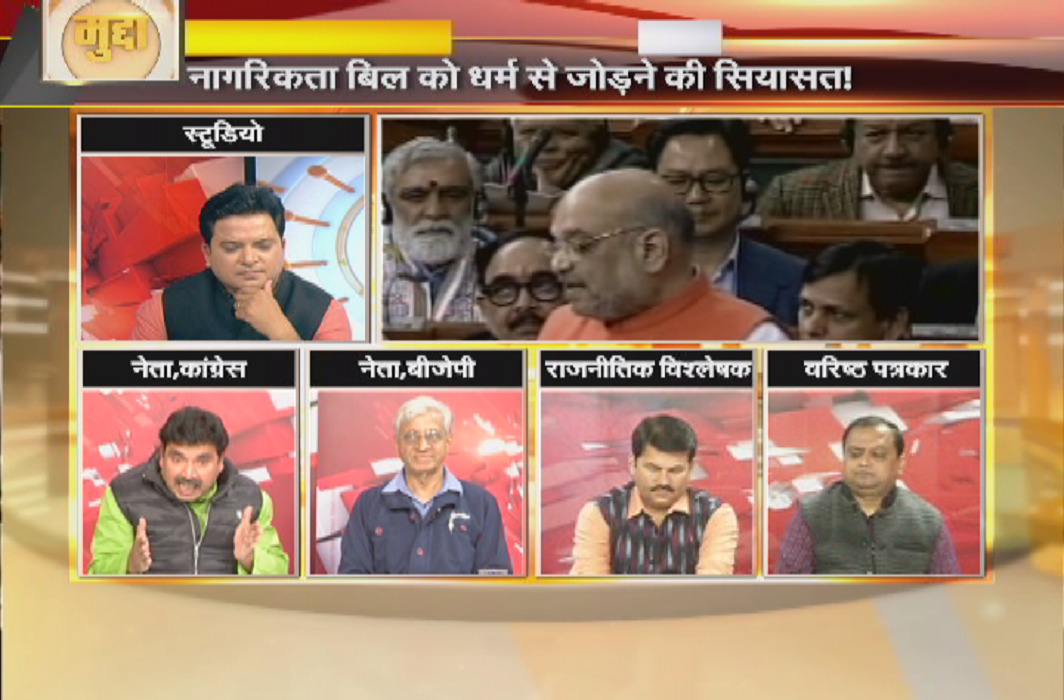 The citizenship amendment bill was passed by a majority vote in Lok Sabha and needs to be passed by the upper house before becoming law. Rajya Sabha will discuss the bill tomorrow afternoon, where the government will have to do floor management to ensure its passage. The bill proposes granting of citizenship to non-Muslim refugees fleeing religious persecution in three countries–Pakistan, Afghanistan and Bangladesh. Meanwhile, hundreds of demonstrators closed down streets in the north-east states amid protests. APN’s popular debate Mudda took up the issue. Anchorperson Akshay posed the questions to panellists, including the BJP’s Dr Vijay Khera, Congress’s Manoj Tiwari, political expert Manoj Mishra, Allahabad High Court advocate Mudhusudan Dixit and noted scribe Nawal Kant Sinha.

Khera said:”Everybody knows the BJP does not have a majority in the Rajya Sabha. Let’s not get confused. This bill makes clear who is a citizen, who is a refugee and who’s not. It seeks to set right the wrongs done to Hindus. People are looking at what’s happening to Hindus outside, and the injustice meted out to them. It is expected that all parties and all members will vote according to their conscience.”

Sinha said: “In the Rajya Sabha, the numbers game must have started. The government is short of 14-15 votes, but there are friendly members who shall vote with the government. I think the mathematics can be easily sorted out in the upper house.”

Mishra said: “Members are answerable to the people. Whether triple talaaq or other controversial bills, people’s will should reign supreme. I think the BJP will be able to find adequate support in the Rajya Sabha.”

Tiwari said: ”Members take oath to serve the constitution, and religious discrimination must be avoided. There should be no tampering of the constitution. I think Home Minister Amit Shah does not have the right perspective on history. This political drama on basis of religion is not acceptable. Shah blames partition on base of religion on Congress, now what is this pole shifting?”

Mishra said: “The talk is on the citizenship bill, not on partition. Let’s discuss those who we are not making citizens.”

Dixit said: “We respect all religions, we need to look at the humanitarian angle.”

Tiwari said: ”There should have been a debate on the NRC. Now there will be no problem of high population figures? Those who enter illegally are called ‘minorities’. What the government is trying to say, is not clear. The first issue is that of security of the infiltrators.”

Khera said: “See, the problem faced by Hindus in Bangladesh and Pakistan is real. We are concerned about that.”

Mishra said: “There are minorities in India, and minorities in Pakistan and Bangladesh as well. Conversions have been done under pressure, I support the bill.”

Khera said: “I want to make clear, the issue is of exploitation in the name of religion, and that Hindus are suffering in Pakistan and Bangladesh, and we need to set right those wrongs.”