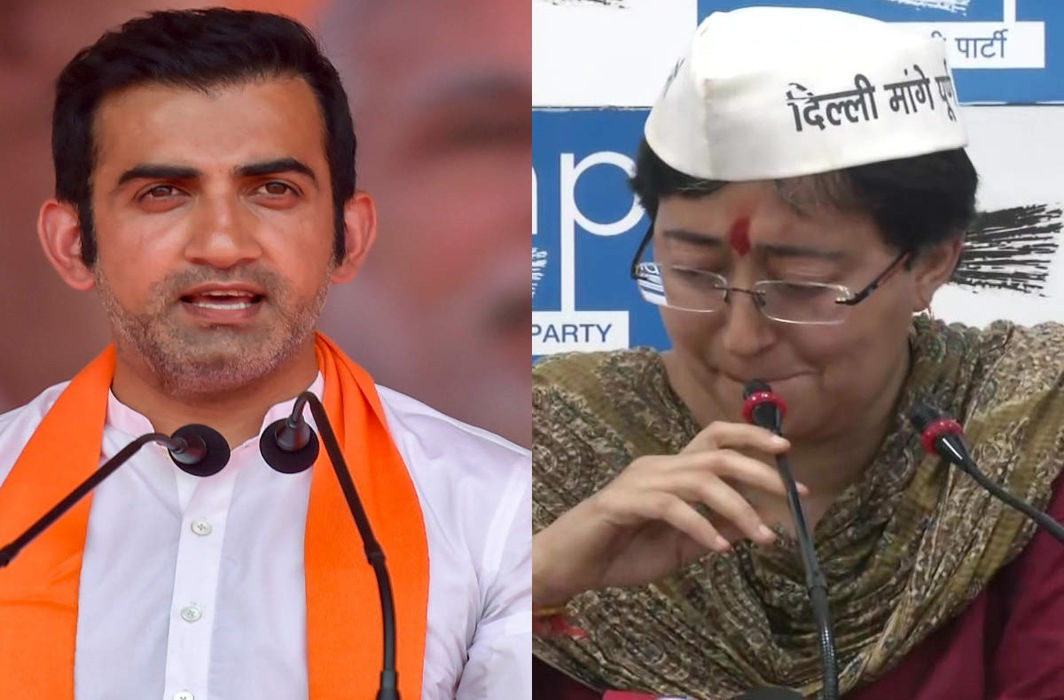 BJP’s East Delhi candidate Gautam Gambhir has sent a defamation notice to Aam Aadmi Party’s (AAP) candidate Atishi after her press conference yesterday (Thursday, May 9) accusing him of distributing a pamphlet containing obscene and derogatory remarks against her.

Yesterday, taking suo motu cognisance of media reports pertaining to the distribution of pamphlets carrying derogatory remarks against Atishi, the Delhi Commission for Women on Thursday issued notice to the city police seeking details of the investigation.

The Returning Officer of the East Delhi parliamentary constituency also directed the police to “file an FIR” in this connection.

For his part, Gambhir, apart from sending notice to Atishi, also sent notices to Delhi CM Arvind Kejriwal and Deputy CM Manish Sisodia. The legal notice demands that they apologise and withdraw their statements or face legal action.

“The Noticees vide the statements in the press conference and on social media websites (‘impugned statement’) have in a calculated and coordinated manner, wrongly and erroneously alleged that these pamphlets have been distributed by our client/ or at his behest,” the legal notice said.

The notice further states that the false statements have been alleged keeping in view the impending elections on Sunday.

AAP hit back after this. Deputy CM Manish Sisodia asked how could Gambhir have dared to threaten the AAP leaders with a legal notice after not only distributing derogatory pamphlets and also levelling false charges against CM Arvind Kejriwal.

Delhi Chief Minister Arvind Kejriwal said the BJP has defamed the AAPleaders and then filed a defamation case against them. Kejriwal vowed to not tolerate the saffron party’s behaviour and said that a defamation notice will be sent to BJP candidate Gautam Gambhir, who faces Atishi from the East Delhi constituency in the Lok Sabha elections.

“They (BJP) have filed defamation case against us after defaming us. We are sending defamation notice to Gautam Gambhir today. We will not leave this matter,” Kejriwal told ANI.

The AAP leader also accused the BJP of not having the capacity to tolerate achievements by women. “Atishi (AAP East Delhi candidate) is a highly educated and accomplished woman. Her work has been great in the field of education which is being discussed worldwide. I don’t understand why BJP can’t tolerate achievements made by women,” he asked.

Aam Aadmi Party’s East Delhi candidate Atishi on Thursday alleged that her opponent, BJP’s Gautam Gambhir, had distributed lakhs of pamphlets that questioned her morals and were full of very objectionable and deeply offensive remarks about her.

Reading out the contents of the pamphlet, Atishi broke down twice at a press conference and said she very pained on seeing it. She asked how women would feel safe if men like him get elected.

Gambhir denied the allegation in strong terms and said would quit politics if the charge is proven. In a series of tweets, he told CM Arvind Kejriwal he “abhors his act of outraging a woman’s modesty and that too his own colleague. And all this for winning elections?”

“I declare that if it’s proven that I did it, I will withdraw my candidature right now. If not, will u quit politics?” he asked Kejriwal.

The leaflet, which AAP claimed was distributed with newspapers in east Delhi societies, called Atishi a “prostitute”, “beef eater” and a “very good example of a mixed breed”.

It also contains scurrilous personal allegations of a sexual relationship between her and Delhi deputy CM Manish Sisodia.