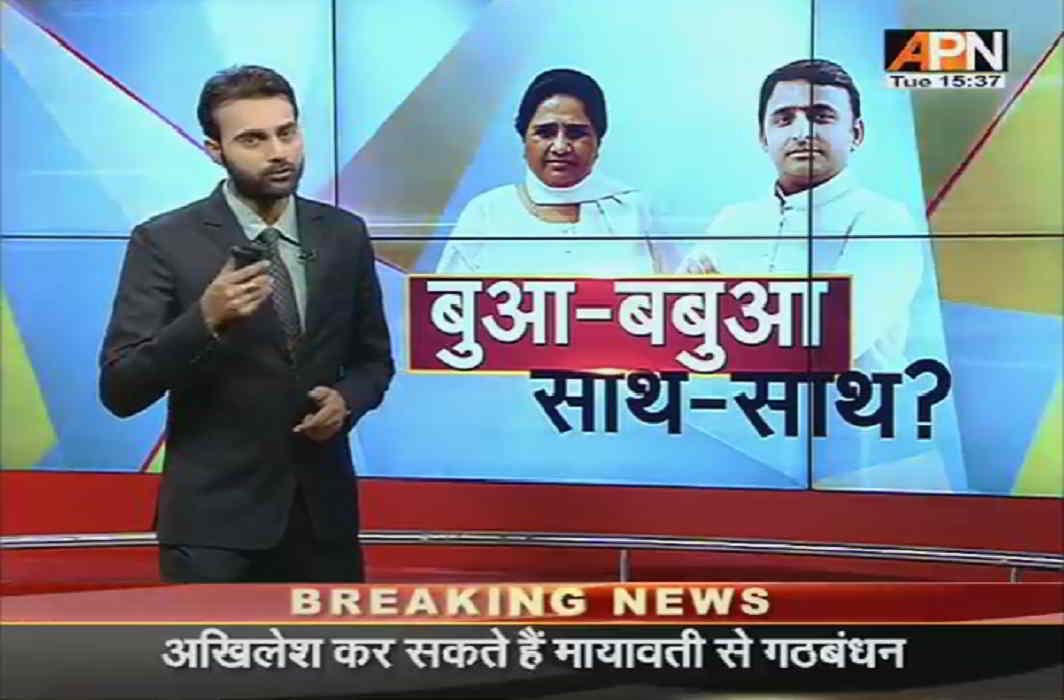 Following the debacle in the recently concluded assembly elections in Uttar Pradesh, the Samajwadi Party and the Bahujan Samaj Party have been seen to be coming closer by political observers. There are now indications that the two arch-rivals may form an alliance ahead of the 2019 parliamentary elections.

On April 11, APN carried a special report Bua Babua Saath Saath? It discussed the duo having a possible change of heart and explored the possibilities of a political tie-up between the two.

Introducing the subject, the anchor raised the question if the two party heads, Mayawati Prabhu Das and Akhilesh Singh Yadav, can come closer in the same way that rivals Lalu Prasad and Nitish Kumar did in Bihar before the 2015 elections. He also referred to the efforts of West Bengal Chief Minister Mamata Banerjee and Prasad in this direction. These leaders have been proposing a grand alliance to defeat the BJP in the forthcoming parliamentary elections. In fact, way back in 2015, Akhilesh’s uncle and SP thinktank Ram Gopal Yadav had first mooted the idea of an SP-BSP tie-up.

Quoting unnamed sources among members of the national executives in the two parties, the APN report said that after being defeated badly in two consecutive elections, both are now exploring chances of a pre-poll truck. It also said that there are possibilities of Mayawati forgiving the SP for the 1995 guesthouse incident when she was virtually confined to a VIP bungalow in Lucknow as SP goons paraded outside. Just a day ago, she had winded up her alliance with the SP, and this experience ruled out any further tie-up between the two, turning them into bitter rivals, an enmity that has persisted to this day.

Indeed, in 1993, the BSP and SP had established a coalition government. But since neither of the party heads had a power sharing attitude, it fell through. The BSP continued to rule for just a few more months—till October 1995—with outside support from the BJP.

Quoting sources in Samajwadi Party, the APN anchor said that the SP leaders are now watching how Mayawati behaves. However, the SP has not given any formal indication of warming up to the BSP.

It is worth mentioning that in the last assembly elections, the BJP got a clear majority in Uttar Pradesh after 26 years. The Modi wave has caused ruptures in the SP, the BSP and the Congress. These resulted in the Samajwadi Party winning only 47 seats. This was the worst election outcome for the SP in the last 25 years. The BSP, too, experienced its worst defeat, securing only 19 seats.