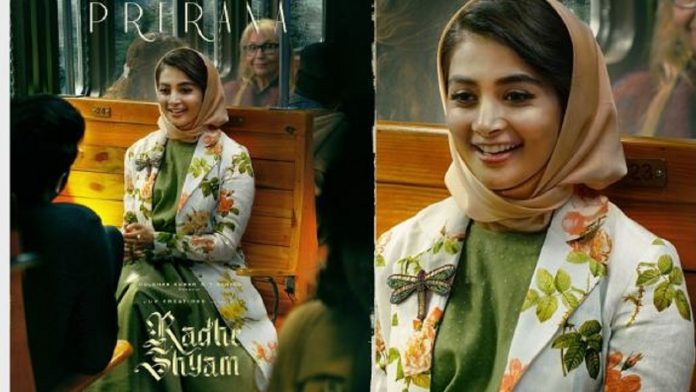 On the occasion of Pooja Hegde’s birthday, Prabhas on Tuesday unveiled her first look from their upcoming film Radhe Shyam. The actor turned 30 today. To mark the special day, Prabhas posted a beautiful picture of his co-actor. He went on to reveal her character name as Prerana from the movie.

In the picture, Pooja sported a retro look, She wore a long floral jacket with a scarf wrapped on her head. Seated in a passenger train, the actor is presumed to be having a cheerful conversation with someone on the opposite side of her seat.

Earlier in July this year, the makers shared the first look poster.

As the duo are teaming up for the first time, their onscreen chemistry is expected to be the major highlight of the movie. Directed by Radha Krishna Kumar and bankrolled by UV Creations and T-series, the film is sought to be a mega budget trilingual which will be released in Tamil, Hindi and Telugu.

It was reported that Prabhas was shooting in Europe for the film. He had to return to India owing to Covid-19 lockdown. The production of the film is said to be resumed around mid-September. The actors are currently shooting in Italy.The makers are yet to lock the release date as no official announcement has been made till now.

Meanwhile, Hegde entered the film industry with a 2012 Tamil film Mugamoodi. She made her Bollywood debut with Ashutosh Gowariker’s Mohenjo Daro in which she played the female lead opposite Hrithik Roshan.She will be next seen opposite Salman Khan in upcoming film ‘Kabhi Eid Kabhi Diwali’, which will be directed by Farhad Samji.

On other hand, Prabhas who was last seen in Saaho, has mega-budget mythological film Adipurush in his kitty.