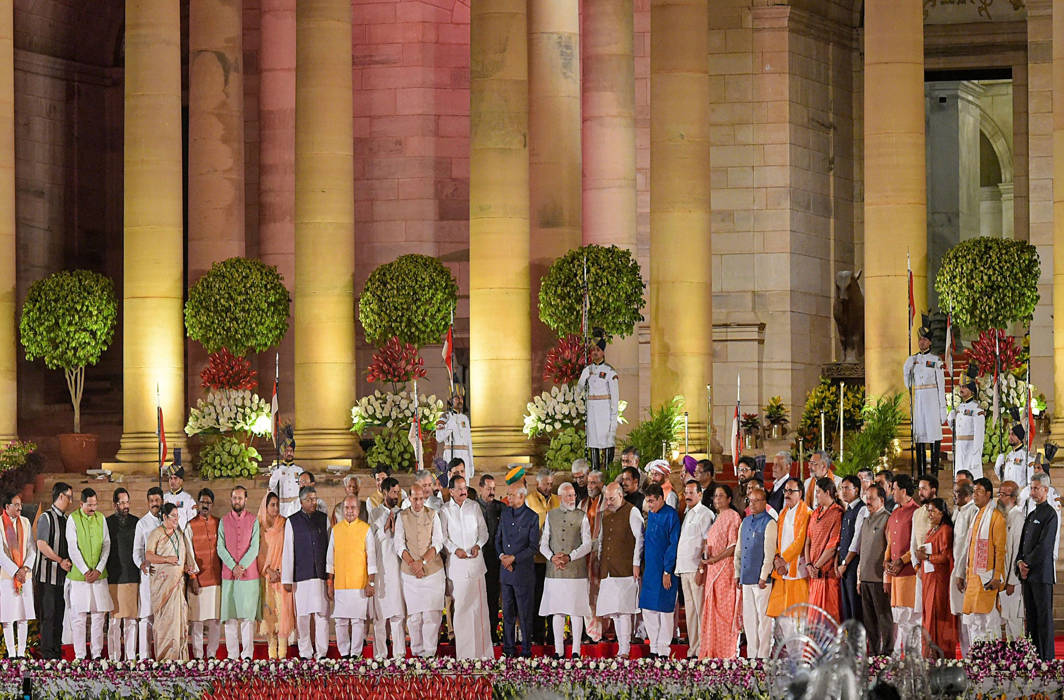 After the grand swearing-in ceremony yesterday (Thursday May 30) of Prime Minister Narendra Modi along with 25 ministers of Cabinet rank, nine Ministers of State (MoS) with independent charge and 24 others as MoS, among the highlights today was allocation of the key Home portfolio to Amit Shah and External Affairs to former foreign secretary S Jaishankar.

Also noteworthy was retaining the ministries that are central to BJP-RSS politico-cultural programme to persons from the RSS background: Ministry of Information and Broadcasting (I&B) has been given to Prakash Javadekar, who also heads the Ministry of Environment, Forest and Climate Change, and Ministry of Human Resource Development to Ramesh Pokhriyal.

While the total of 58 ministers (including the PM) has some prominent new faces, like BJP president Amit Shah and the former diplomat Jaishankar, there are also some significant names missing that were part of the Council of Ministers in Modi’s first term as PM.

One-third of the total ministers in the Modi’s 2.0 Cabinet are the first-timers, including BJP president Amit Shah and former foreign secretary S Jaishankar.

More than half of ministers in previous government dropped, nearly 2/3rd of MoS rank

Arun Jaitley and Sushma Swaraj are not in this Cabinet. Jaitley had excused himself citing health reasons. Swaraj had opted out of contesting Lok Sabha elections.

Jagat Prakash Nadda, who was the Health and Family Welfare minister, has also not been included in the new Cabinet.There is speculation that he may be asked to lead the party if incumbent BJP president Amit Shah relinquishes the post.

Among the missing names from ministers below Cabinet rank is Rajyavardhan Singh Rathore, the former Union Minister of State (with independent charge) of Information and Broadcasting and Sports and Youth Affairs. Also dropped was Manoj Sinha, who had independent charge of Communications and was an MoS in Railways. He had lost to Afzal Ansari of the BSP from Ghazipur, UP.

AlphonsKannanthanam, who had independent charge of Tourism, and Mahesh Sharma, who was MoS (independent charge) for Culture and Environment, Forest and Climate Change, also did not find a place in the new Cabinet.

The most prominent first timer in PM Modi’s cabinet is BJP president Amit Shah. Last evening, he had made calls to leaders who will be ministers in the new government. Interestingly, Shah was third in the pecking order of taking oath. After Modi and Rajnath Singh, but ahead of former party chief Nitin Gadkari.

Taking over from Rajnath Singh, who has been given the Defence Ministry, PM Modi’s trusted lieutenant and strategist will head the Ministry of Home Affairs. His style of running the party organisation with an iron hand, while employing guile wherever required, is bound to be evident in the home ministry affairs as well.

It was clear that Shah would be a part of the government when he chose to contest the Lok Sabha election. He and Modi were together in the party’s victory celebrations, travelled together to their respective constituencies of Varanasi and Gandhinagar and together they decided the members for the new government.

Besides, Modi’s trust in Shah is indisputable. At the BJP national executive following the party’s massive victory in 2014, Modi had said, “Amit Shah was the man of the match. Had Shah not been given the responsibility of Uttar Pradesh, the country would not have known about his immense skills. I have personally known Shah for a long time. He will perform to his potential in his new responsibility and I have no doubt about that.”

As the general secretary in charge of Uttar Pradesh, Shah delivered a stunning mandate in the form of 73 of the 80 seats in the state in 2014 and was subsequently made the BJP’s top boss.

The BJP repeated its performance in Uttar Pradesh Assembly polls, winning 311 of the 403 seats. Modi called him ‘the man of the match’ of that election.