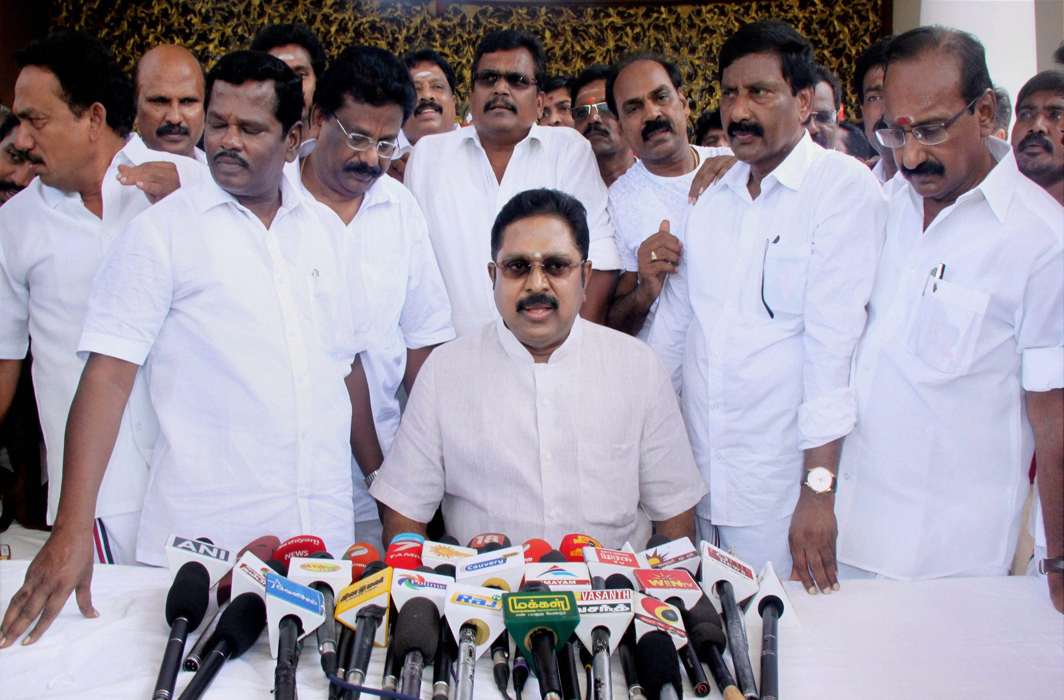 Troubles mounted for the already embattled ‘disputed’ AIADMK chief, the jailed VK Sasikala and her nephew TTV Dhinakaran, on Thursday morning, as the Income Tax department carried out raids at premises of Jaya TV in Chennai and several other locations across Tamil Nadu which are associated with the duo or their close aides.

The Income Tax department claimed that the raids were part of their ongoing ‘Operation Clean Money’. Dhinakaran, however, struck a defiant note and alleged that the I-T sleuths were executing a “political vendetta” against him as part of a conspiracy between Prime Minister Narendra Modi-led central government and the Tamil Nadu government led by, chief minister E Palaniswamy and deputy chief minister O Panneerselvam.

People are watching everything, they understand what is going on. If the Centre thinks they can destroy us by conducting such raids, they are day-dreaming: TTV Dhinakaran pic.twitter.com/oALm1R4PBq

The tax raids against AIADMK’s ‘mouthpiece’ Jaya TV which is controlled by Sasikala and against Dhinakaran comes days after Prime Minister Narendra Modi visited Chennai. Modi’s visit to Chennai had created a political storm due to the mixed signals it gave after he met Tamil Nadu chief minister E Palaniswamy and then called on the AIADMK’s political arch rival, the ailing DMK chief M Karunanidhi.

Modi’s visit to the leaders of the two key political camps of Tamil Nadu came days before Tamil icon Kamal Haasan was scheduled to announce his roadmap for a political debut. Modi and his BJP have been desperately trying to expand their saffron footprint in the southern state. Despite BJP leaders as well as Karunanidhi’s son and heir apparent MK Stalin claiming that no political message should be read into the Prime Minister’s “courtesy visit” to Karunanidhi, the grapevine was abuzz with talk of a political re-alignment in the state under which the BJP would dump its friendly equations with the factionalised AIADMK and instead explore an alliance with the DMK.

The income tax raids that rocked Dhinakaran and the Sasikala camp of the AIADMK on Thursday saw taxmen searching the offices of Jaya TV in Chennai, residences of Sasikala’s niece Krishna Priya in T. Nagar; her brother Dhivakaran in Mannargudi; Dhinakaran’s uncle Dr. Venkatesh in Thanjavaur; supporters and relatives of Dhinakaran in the Nilgiris, Pudukottai and Tirunelveli districts; and Saradha Paper and Boards Pvt. Ltd., Bhavanisagar in Erode district.

As the I-T raids and search operations carried on, a defiant Dhinakaran emerged from his Chennai residence to tell mediapersons: “my farm house at Puducherry is being searched…This is a conspiracy to remove me and Sasikala from politics.  The Central government has sent the I-T department after me.”

Asserting that the I-T action against him and Sasikala’s close aides was being “orchestrated by the Centre; EPS (Palaniswamy) and OPS (Panneerselvam) are both behind this” Dhinakaran said: “I will not bow down. What can they do? Will they send me to jail for 25 years? I have been to jail before. Will they hang me for this? The AIADMK is not just me alone, we also have two crore members who will continue the struggle against EPS and OPS.”

Dhinakaran said that the I-T raids were prompted by his recent attack against the Centre on Prime Minister Narendra Modi’s demonetisation decision. Some local media establishments in Chennai claimed that as many as 187 locations spread across four states that are linked with the Sasikala family are being raided as part of the I-T department’s ‘Operation Clean Money’.

Meanwhile, BJP leader Subramanian Swamy too tried to wade into the controversy almost claiming as if the raids were a reaction to his complaints against Sasikala made in a court but at the same time also lamenting why similar action was not being taken against Karunanidhi and his daughter, 2G scam accused M Kanimozhi.

In addition to data on Sasikala in the courts I had given a 30 page Note to Authorities on MK’s and daughter’s frauds. Why no raids yet ?