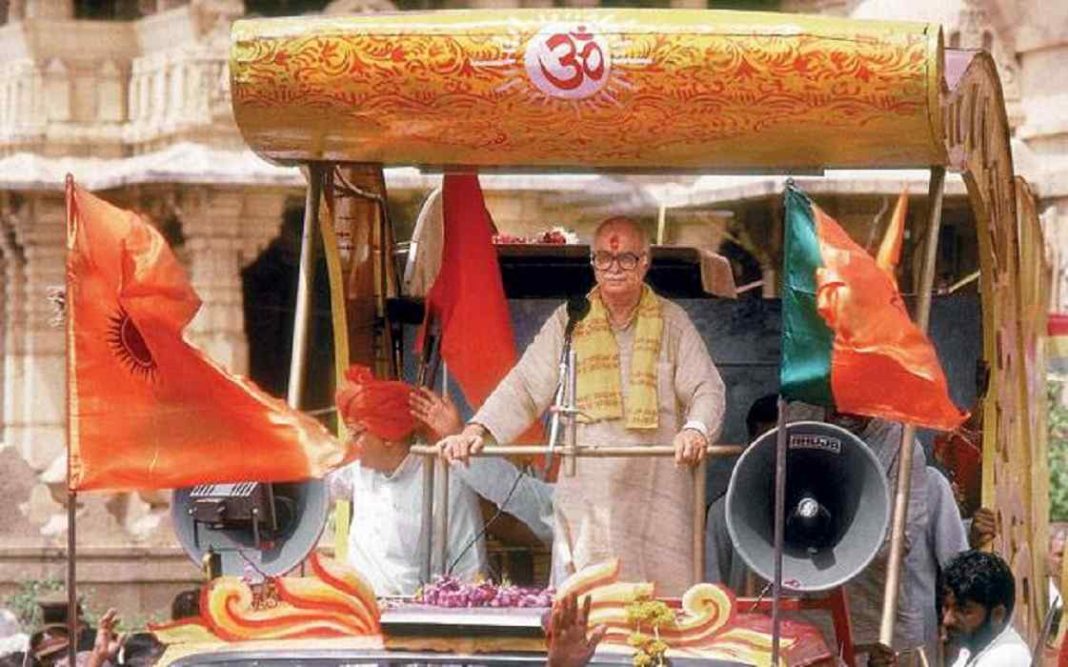 Advani, who made Hindutva a potent political force, by riding the rath in the late 1980s is a lonely man now.

“Kasam Ram ki khatey hain, Mandir wahin banayenge (We pledge by Lord Ram that we’ll build the temple there)!” This used to be one of the slogans that used to rend the air before Lal Krishna Advani’s famous rath wound its way from Sarnath with the original destination of Ayodhya, where the dilapidated Babri mosque still stood. The mosque is history now. But the famous rathyatri, LK Advani along with his party colleagues Murli Manohar Joshi, Uma Bharti and others, has been charged for hatching the conspiracy to demolish the Mughal era mosque on December 6, 1992.

Of course, the case will drag on for years now. It may perhaps outlast Advaniji who will turn 90 this November. But, there hangs a dramatic tale that completely transformed Indian politics forever. And, the man who played the key role in the transformation of Indian politics was none other than Advani himself.

Ironically, the same man, LK Advani, is now facing the criminal charge of hatching conspiracy to demolition the Babri mosque in 1992. There are all kinds of speculation in Delhi political circles about Advani’s name being suddenly cleared by the CBI in the ill-famed case.

Well, conspiracy theorists trace the conspiracy to the PMO under whose guidance the CBI operates. The motive being touted in the regard is that certain BJP quarters who did not want Advani for the presidential post have managed to put the octogenarian out of the race that will begin soon.

Conspiracies do have their own charm for those who wish to lap them up. But, beyond conspiracy theories, one could authoritatively say that Advani was not rewarded as much by his party, BJP, which he had transformed into a ‘’political touchable’’ and also as the principal pole of Indian politics. How did he do it? One needs to look back at the turbulent 1990s.

It was the time when VP Singh was still in power heading the Janata Dal government after defeating Rajiv Gandhi in 1989. But the Singh government was tottering as a rebellion had broken out in its ranks with Chandra Shekhar and Devi Lal walking out of the Janata Dal.

Singh’s days were numbered. He pulled sort of a political coup suddenly by implementing 27% quota for the other backward classes in government services and educational institutions. Hell broke loose. The country was polarised between the “forwards” and the “backwards”—a divide never heard of in Indian politics or society. It seemed to have fractured Hindu society.

What to do; how to paper over the cracks? No one knew; no politician either could think of bridging this dangerous divide. In this moment of grave crisis within Hindu society, the only man who stood out to bring Hindus closer was Advani.

Advani rode the rath and went on a yatra to build the Ram temple on the site ‘where Lord Ram was born’. But there stood a mosque call Babri Masjid­ built by the first Mughal Emperor’s commander Mir Baqi sometime in the 16th century.

It was a political masterstroke. Naturally, now Muslims jumped into the fray. They said how can a temple be built on the site of a centuries-old mosque! A new debate started in political circles. The Sangh Parivar, along with the BJP, put all its might behind the Ram temple movement while Muslims stood up to defend Babri Masjid under the aegis of the Babri Masjid Action Committee.

Here was a new divide. Now, Hindus and Muslims were up against each other “defending their faith”: The Muslims were defending the Babri mosque while the Hindus were standing behind the Ram temple. And, the man firing the Hindu passions was none other than LK Advani with his rath yatra. Amidst all this din of mandir versus masjid, was drowned the forward-backward divide which was threatening Hindu unity in the wake of OBC reservations.

Oh, my God, Advani of those heady days was a different man. His forehead smeared with a blood-red tilak, a bow and arrow in his hands, calmly standing on a rath with hysterical crowds shouting: ‘Kasam Ram ki khatey hain, Mandir wahin banayenge.” To many Ram bhakts, Advani of those days seemed an avatar of Ram himself.

However, Advani was not on a mission just to get the Ram temple come up in Ayodhya. He was marketing both BJP and Hindutva—something the RSS from the Jan Sangh days in 1950s tried, but could not. Advani’s theme all through the rath yatra days and even later was pseudo-secularism, a new phrase that was coined.

His argument was appealing, indeed. He argued: You had a government (Rajiv Gandhi government) which amended the Constitution to give Muslim men the right to divorce their women through triple talaq. But, now, political parties in power are not willing to amend the Constitution to build the Ram temple in a Hindu majority country. ‘’Is it not appeasement?” Advani would turn and quiz the crowd which would nod approvingly to his query.

Well, to cut the long story short, the Babri mosque is history. A ‘bhavya’ Ram temple is yet to come up in Ayodhya. But, Indian politics has changed once for all. Hindutva, which had not many takers till Advani’s rath yatra, is now the principal political ideology of the country. The BJP is in a position to rule India on its own strength.

The man who is reaping the fruits of Advani’s hard work in none other than Narendra Modi, who is heading 1.3 billion Indians as the prime minister. The RSS is also calling the shots both inside and outside the government. But, the man who brought them to this stage is facing trial in a criminal conspiracy case to demolish Babri mosque.

What an irony! When Advani was at the peak of his popularity, a hawala case hit him hard in 1996 paving the way for Atal Bihari Vajpayee to pip him to the post of prime minister of India. And, once again, in 2014, when the BJP’s popularity was riding high, Modi outsmarted his guru Advani and became the Prime Minister.

Sadly, neither the party nor the Sangh has stood by Advani at this crucial time. How lonely he must have been feeling when a magistrate in Lucknow was reading out conspiracy charges in the Babri mosque-Ram temple case! It seems even Lord Ram cannot help him in his difficult times when his own people have dumped him.

—This column first appeared in National Herald.
Agha is Editor of Quami Awaaz. The
views expressed are his own.

Republic Day is celebrated every year on January 26. Given below are the speech ideas that will help you win the competition.
Read more