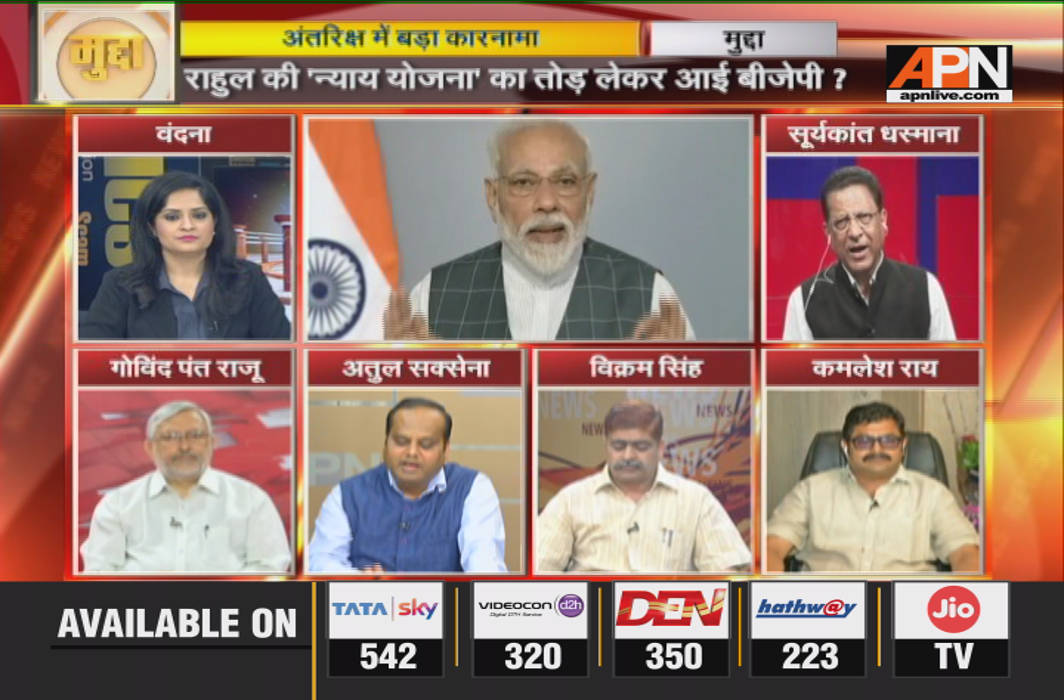 Prime Minister Narendra Modi today (Wednesday, March 27) addressed the nation to announce that India has become the fourth space superpower after US, China and Russia as the ‘Mission Shakti’ was successfully completed within three minutes of launch.

The opposition parties have slammed PM Modi for addressing the nation ahead of Lok Sabha polls and have claimed his act- a political stunt.

APN in its popular show Mudda will discuss with the panelists over the same and will know what they think about it, with Anchorperson Vandana along with Congress leader Suryakant Dhasmana, SP leader Atul Saxena, BJP leader Vikram Singh, APN consultant Govindpant Raju, and Shivsena leader Kamlesh Rai.

Suryakant was first to speak, who said, “Indian Scientists were working for very long period of time and it has not been achieved in five years but government is trying to show it as they have achieved it.”

Atul Saxena said “PM Modi has wasted people’s precious time like this and is distracting innocent people from serious concerns such as joblessness and other developmental issues.”

Vikram Singh said “If PM Modi is informing countrymen about India’s achievement then what is the problem in it, why the matter is being politicized?”

“We should have discussed what low-earth-orbit is, medium earth orbit, high-earth-orbit and how these satellites work, but instead of discussing all such things we are discussing Why Narendra Modi announced it”, he added.

Suryakant said, “I would like to congratulate Indian scientists for the great achievement but would like to say that if any senior scientist would have announced it then things would have been something else but such type of announcement by a PM raises questions in people’s mind.”

Kamelsh Rai said “I would like to congratulate Indian scientists and PM Modi for the great achievement as it is the PM Modi who always stands in support of the defence and with all other person and organization who works for the nation’s welfare.”

Govindpant Raju said “This is not the first time that any PM is announcing anything about country’s achievement, earlier also when Parmanu missile were tested late PM Atal Bihari Vajpayee had announced about that achievement not any scientist.”

Suryakant said, “This is the achievement of ISRO, DRDO and Indian scientists but PM is trying to take credit in their achievement.”

Raju said “If Modi informed people about this great achievement without naming his government or any other political party then there must not be any criticism over the issue.”

In an overall discussion it has come to our knowledge that panelists, especially congress and anti-BJP parties’ feels that this kind of announcement would been made by any DRDO senior officer or any senior scientist instead of PM Modi.