Home Latest world news Origin Of Saudi-Qatar Spat: What Lies In The Future 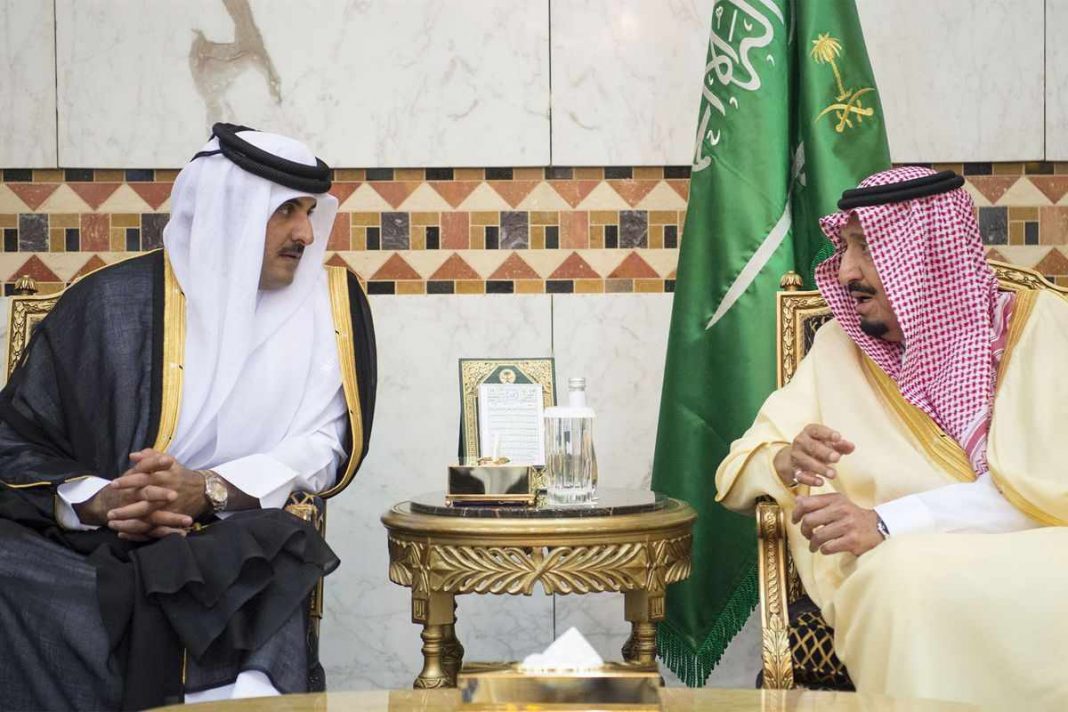 The western media, which was shy of mentioning the Muslim Brotherhood (MB) as a threat to the Saudi regime, has now started describing it as a threat to Riyadh quite as potent as Shia Islam. This change is a major fall-out from the Saudi-Qatari spat.

Qatar, for quite some time, has patronized the MB, a powerful grass roots force in Egypt and Turkey. It is sufficiently powerful to keep King Abdullah of Jordan at sixes and sevens. Also, one must not forget the MB uprising in Hama, north west Syria, in 1982, which Bashar al Assad’s father, Hafez al Assad quelled with such brute power that the death toll exceeded10,000. In 2011 when Tayyip Erdogan took a more benign interest in Syrian affairs his advice to Assad was straightforward: accommodate the MB in the establishment.

Unbridled MB power is anathema to both Israel and Saudis. That is why Saudis placed $8 billion in Abdel Fattah el-Sisi’s hand when he ousted the MB’s Mohamed Morsi. Today, Sisi’s job is on the line.

Israel has nightmares because it fears the MB weed in Egypt and elsewhere will link up with Hamas, another strong MB outfit. When the western media, protective of Israeli interests, list the “Shia axis” inimical to the Jewish state – Iran, Hezbollah, Syria – it mentions Hamas in the same breath without the essential qualification: Hamas is True Blue Sunni. The link up with Iran is political or ideological, not religious.

Saudi anxieties are more profound. Remember, from January 1980, the Saudis began to play down the monarchy and focus more on the King’s role as the “keeper of the holy shrines at Mecca and Medina”. This show of humility followed two events, one after the other, which shook the house of Saud.

The Iranian revolution which brought the Ayatollahs to power in Tehran in 1979 coincided more or less with the siege of the Mecca mosque by Juhayman al-Otaybi and hundreds of his supporters, demanding the overthrow of the House of Saud and an end to the “anti Islamic” monarchy in Saudi Arabia.

Taking advantage of these eruptions, the oil bearing Eastern province of Saudi Arabia, the Shia dominated Qatif and al Hasa region rose in rebellion in 1979 against Riyadh’s anti Shia sectarian bias and arbitrary arrests. The uprising lasted a week. Over 100 died in police action.

This regional uprising magnified itself a 100-fold in Saudi eyes because of the emergence of the Ayatollahs in Iran. This also became the source of anxiety to Bahrain where 70 per cent of the population is Shia and locked in a tussle for more rights from the Sunni rulers – the House of Khalifas.

While pointing at the Shia menace, Saudis seldom express their worries about Qatif and Bahrain where they sent their troops to quell the Arab Spring. Those issues could possibly invite a Human Rights scrutiny. Focus on Iran, Hezbollah, Alawite power in Syria is much more beneficial because this axis invokes Israel’s deepest anxieties. The western media is so much more sympathetic for this reason. If the past is any guide, Thomas Friedman of the New York Times should be on his way to Riyadh for yet another exclusive interview with the new Crown Prince.

That Qatar has relations with Iran is disliked in Riyadh, of course, but what causes much deeper anxieties is the material and moral support Qatar can provide to MB which represents all the tendencies that the Otaybi rebellion in 1979 represented.

Riyadh-Doha differences go back to the days when the aging Emir, was ousted by his son, Hamad bin Khalifa. The ousted Emir’s attempted counter coup failed but it had Saudi support.

Osama bin Laden’s war on the house of Saud had a declared reason: Saudis had accorded hospitality to the troops of the “infidel US”. Qatar took advantage of situation and hosted CENTCOM.

Then came another affront to Saudi pride: Al Jazeera TV. When the BBC shut down its Arabic service, trained TV hands became available in the market. At the time the BBC was also in search of funds for its World Service TV. BBC had been left behind by CNN which stole the limelight during Operation Desert Storm in 1992.

Saudi King Fahd’s cousin, Khalid bin Faisal al Saud’s Orbit Communications hired the BBC hands and launched a channel. But it lasted no more than 18 months because editorial freedom clashed with Saudi’s abiding restrictions on issues anchored to Sharia. Riyadh would not allow the new channel to telecast a documentary on public “beheadings”.

That is when Qatar moved into the breach and launched Al Jazeera, first in Arabic. As BBC retirees like Sir David Frost became available, Al Jazeera English made rapid recruitments.

At a time when Osama bin Laden was a news source, Al Jazeera became the channel for all bin Laden interviews and audio statements. Coverage by BBC, CNN, Fox News of all the 9/11 wars acquired a uniformity which strained credibility. Al Jazeera livened up proceedings by bringing into focus “the other” perspective as well. This was not “cricket” for the authors of the new world order. Scholars like the late Fouad Ajami, supportive of George W Bush’s invasion of Iran and Afghanistan, wrote academic papers on Al Jazeera’s perfidy. Allied aircraft even bombed the channel’s offices in Kabul and Baghdad. All of this boosted Al Jazeera viewership sky high.

The late Saudi King Abdullah, much the most supple ruler in recent decades, mended fences with Qatar. We have to be together, otherwise the “spring” will blow away the region’s monarchies, he argued.

Moreover, CNN, BBC propaganda was not being believed in the region during the Syrian and Libyan operations. Al Jazeera’s priceless credibility was commandeered. Qatar succumbed. Both the operations, Syria and Libya have been a disaster from every angle. Additionally they have taken a toll of Al Jazeera’s credibility.

The present spat however has the potential of restoring Al Jazeera’s credibility should deft editorial hands take up the anti establishment position which was Al Jazeera’s forte and which it surrendered under the personal pressure of the late Saudi king.

The larger game now must impinge on Qatar, Iran and Russian gas reserves, the energy of the future. To keep the cohesion of this triangle or to break it must be the preoccupation of regional combatants now and in the foreseeable future.